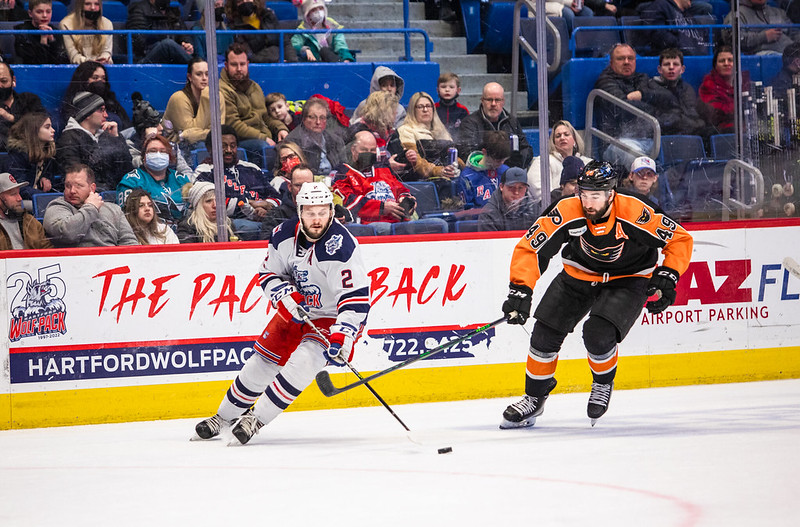 Hartford, CT – Hayden Hodgson (12th) and Charlie Gerard (3rd) scored in the opening period for a 2-0 lead on the road but the Hartford Wolf Pack responded with five goals in the second en route to a 6-4 decision on Saturday night at XL Center.

Lehigh Valley (15-16-8) generated 18 shots in the second period but were unable to break Kinkaid as the lead slipped away and the game turned to Hartford’s favor. The Phantoms out shot the Wolf Pack 39-24 on the night. Lehigh Valley missed out on an opportunity to push over the .500 mark for the first time this season. 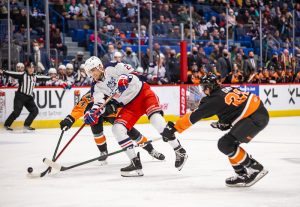 Hodgson’s strike to open the scoring was his third of the weekend for the surging newcomer who has taken the team-lead in goals. Garrett Wilson connected with him from behind the goal for Hodgson’s bullet at 7:37 into the game.

Gerard doubled the lead less than five minutes later when Egor Zamula found him in the slot. Gerard whacked it to the stick side of goalie Keith Kinkaid on a goal also assisted by Cam York. Gerard had two other great chances in the game that were stuffed by Kinkaid.

The tables turned in the middle period beginning with Austin Rueschhoff’s (11th) goal down low followed by Tim Gettinger’s scramble for a score three minutes later to forge a 2-2 tie.

Michael O’Leary put the Wolf Pack in front 3-2 and then Morgan Barron deflected and bounced downward a right-wing pass from Tanner Fritz on a shorthanded rush for a 4-2 lead. Nils Lundkvist capped the second-period rally with a drive from center point on the stick side of goalie Garrett Metcalf for a 5-2 score at the second intermission.

Lehigh Valley tried to climb back late with Wyatte Wylie (3rd) scoring from center point with 4:51 remaining to cut the deficit to 5-3.

The Phantoms had another key power play opportunity but again gave up a shorthanded goal when Metcalf lost the puck behind the net to Hartford captain Jonny Brodzinski (16th) who turned the gify into a quick wrap-around and a new Hartford record 9-game goal streak.

Isaac Ratcliffe (5th) concluded the scoring with 26 seconds left muscling a puck through the left pad of Kinkaid in tight quarters.

Tonight’s game marked the beginning o fthe second half of the season. It was the 39th game out of 76.

Lehigh Valley is 3-2-0 against the Wolf Pack this season and finished with a 2-1-0 record at XL Center.