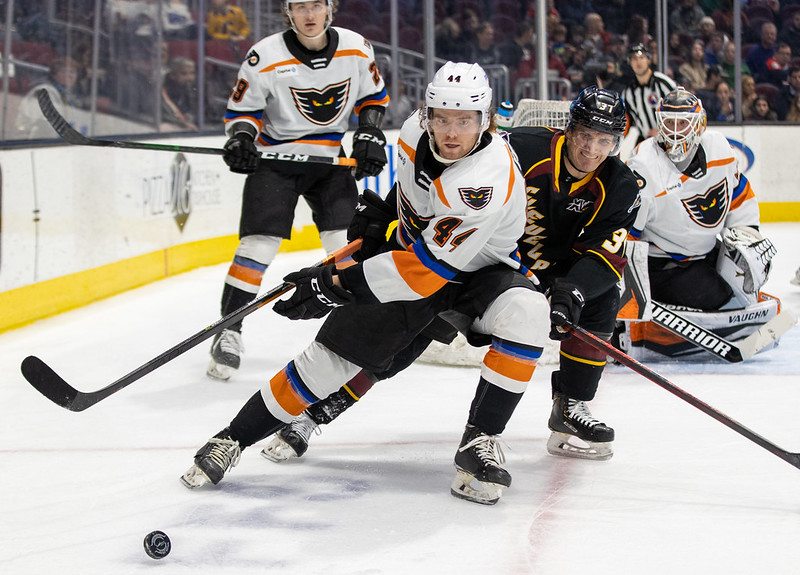 Cleveland, OH – Pat Nagle was terrific in his first game back with the Phantoms in almost a month but it wasn’t enough in a hard-fought 2-1 loss at the Cleveland Monsters on Saturday afternoon. Nagle (7-1-3) took his first regulation loss of the season despite a 35-save performance that included several spectacular denials. Nagle was in the crease for the first time since his January 29 shutout at Hartford in his final game before departing for the Winter Olympic Games in Beijing, China as a member of the United States team.

Wyatte Wylie (4th) scored on a point-shot in the opening minute of the third period to get the Phantoms on the baord via a drive that almost looked like it might have been tipped by Hayden Hodgson. Tanner Laczynski recorded his second assist of the weekend and Cam York also earned a helper on the play.

But Lehigh Valley was unable to find the equalizer despite a power play opportunity with just four minutes remaining and another extra-attacker situation when the Phantoms pulled their goalie with one minute left. 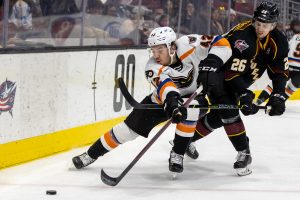 Garrett Wilson earlier had a give-and-go rushing past the defense for a quick breakaway opportunity but his effort to stuff the tying goal five-hole was denied by Jet Greaves to keep the Monsters ahead with just barely more than five minutes remaining.

Justin Scott (11th) and Robbie Payne (3rd) talied for the Monsters with both forwards converting in the closing seconds of the first and second periods. Scott’s even-strangth goal with 25.1 seconds left that he snapped through when he worked his way into an opening in the slot capped a strong push through much of the opening frame. Payne’s goal with just 5.0 seconds left in the second period came on a big one-timer from the top of the left circle on the power play mere moments after Payne had just hit the crossbar on a similar one-time blast.

While Cleveland emerged with the 1-0 lead at the first intermission, the Phantoms were not without their chances. A scramble down low on Jet Greaves almost resulted in the Phantoms taking the initial lead. Hayden Hodgson’s flick from the left slot aimed for the far post was somehow spotted by Greaves who made the left kick stop to knock it away. The sequence continued with more pinballing pucks off the pads of Greaves but the Phantoms couldn’t convert.

Lehigh Valley also had a dangerously close try in the second period with a 2-on-0 turning into a Matt Strome chip attempt from the right of the cage but Greaves got there with the left pad to make perhaps his strongest stop of the day.

Some of the feisty play from Friday night carried over into the Saturday afternoon rematch while Cleveland continued to play their hard and heavy game. Brennan Saulnier sparked some attention a couple of times from the Monsters and from the officials and ultimately took a pair of 10-minute misconducts late in the third period to exit the game early.

Cleveland hoped they had scored in the second period when they rocked into Nagle in the crease. Kevin Stenlund came barging in with the puck and Tyler Sikura pushed Nagle and the puck into the cage. The red light came on but the referee quickly signalled that it was no goal while also taking Stenlund to the box for goaltender interference.

Cleveland took both games in the weekend series by idential 2-1 scores with Friday’s overtime result earning the Phantoms a standings point. Lehigh Valley went 1-1-1 on its three-game road-trip with all three games being decided by one goal while Lehigh Valley played to overtime in two of the three contests.

The Phantoms return to PPL Center to open a three-game homestand with a Wednesday night matchup against the streaking Providence Bruins. The homestand continues on Friday and Saturday nights with back-to-back engagements against the Charlotte Checkers on the Phantoms’ 25th Anniversary Celebration Weekend.