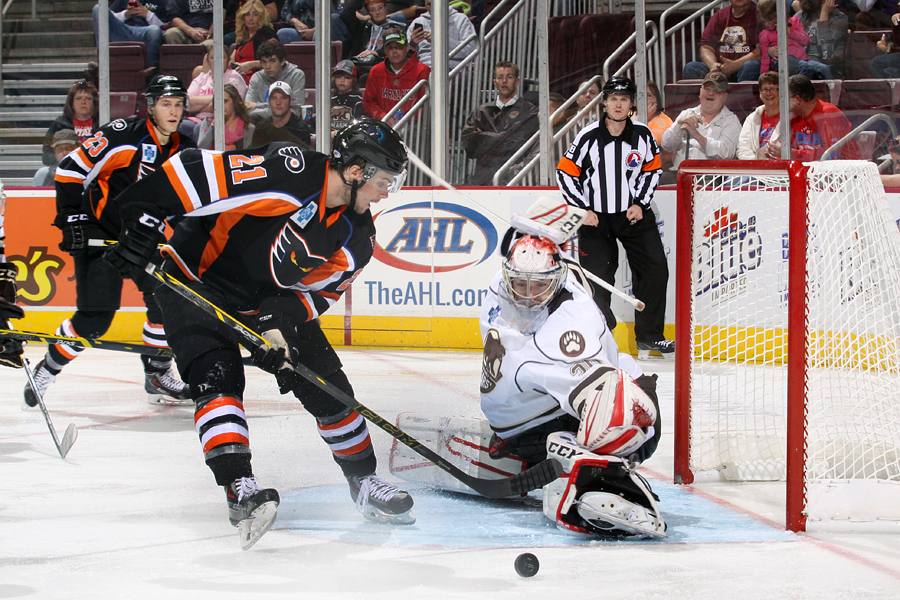 Pirates Clamp Down on Lehigh Valley in 3-0 Decision

Portland, ME – The Lehigh Valley Phantoms concluded their three-game road swing through New England with a 3-0 loss at the Portland Pirates on Saturday night. Veteran goalie Mike McKenna turned aside 27 Phantoms drives to record the first shutout of the season for the Arizona Coyotes affiliate who remained the hottest team in the American Hockey League with their fifth win in a row.

Rob Zepp had another solid game in goal for the Phantoms with 37 saves on his way to being pinned with only his second regulation loss of the season. Brendan Shinnimin had a pair of nice assists for Portland while Jordan Szwarz (2nd), Henrik Samuelsson (3rd) and Lucas Lessio (5th) scored for the Pirates.

The first period saw a good amount of chippy play as emotions were running high between the two teams in their first meeting since a brawl-marred, penalty-filled game last February in Lewiston, Maine. Only one fight developed out of all the testiness though with Derek Mathers dropping the gloves for the second straight game in a duel with Mark Louis.

Shinnimin carried the puck up the right-wing in transition and patiently waited for Szwarz to catch up on the back-door for the first tally of the night in the closing minute of period one.

Henrik Samuelsson converted a couple minutes into the second from Alexandre Bolduc to push the lead to 2-0. And Lessio’s sharp wrister from the high-slot beat Zepp past the blocker with less than two to go in the middle period to close the scoring.

Earlier in the evening, it was announced that highly touted defensive prospect Shayne Gostisbehere will miss a few months with an injury to his left knee suffered at Manchester on Friday night in the third period when he crashed into the end boards. Gostisbehere will have surgery on the torn ACL on Thursday. Flyers general manager Ron Hextall said to the media in Philadelphia that he expected Gostisbehere will be able to return later this season but also that the young talent will have to miss multiple months.

Brett Flemming entered the lineup in place of the injured Gostsibehere. Mark Alt and Brett Hextall were both out of the lineup with their injury issues while Darroll Powe sat out for the final of his two-game suspension stemming from his match penalty at the end of Wednesday’s game at Worcester.

The Phantoms conclude their stretch of four consecutive away games next Friday night at the Wilkes-Barre/Scranton Penguins.

The Phantoms begin a nice run of home games on Saturday, November 15th against the Toronto Marlies. Lehigh Valley will play six home games at PPL Center in the two-week span from November 15th through 29th. Get ready for our big tilts on November 19th, 21st and 22nd against Hershey, Worcester and St. John’s. Tickets are available at pplcenter.com or by calling 610-347-TIXX (8499) or in person at the Mealey’s Furniture Box Office at the main entrance of PPL Center.