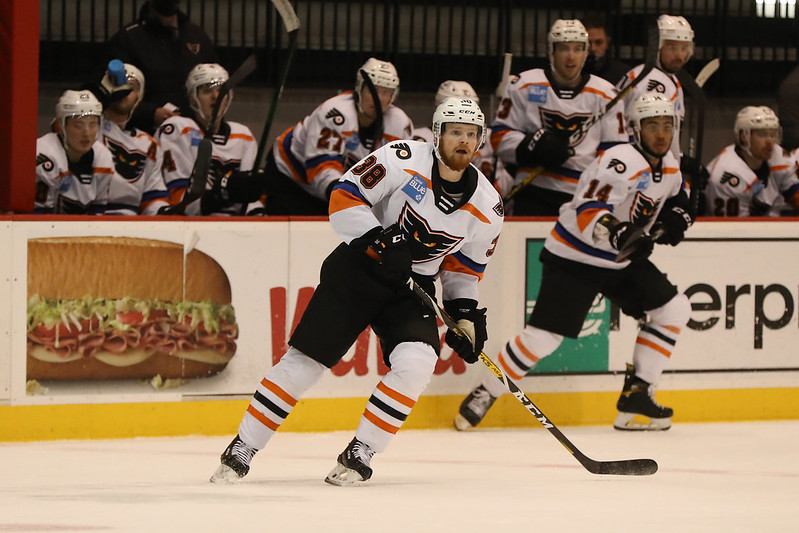 Newark, NJ – David Kase scored shorthanded in the first period and Zane McIntyre had another strong game in net with 22 saves but the Binghamton Devils rallied from behind for a 2-1 overtime win in Newark on Wednesday night. Lehigh Valley (1-0-1) has played consecutive 2-1 overtime decisions to open the season.

Ben Thomson tied the game in the third period for Binghamton (2-0-0) and Brett Seney won the game with a goal down in the low slot of a Ben Street faceoff win in overtime. 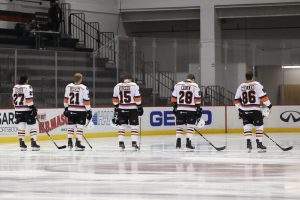 The Phantoms carried the play for the bulk of the first period as the Devils failed to record a single shot on goal until past the midway mark of the frame on the power play. Shortly after they did put their first puck onto McIntyre, Wotherspoon was able to dig the puck away in the corner to send Max Willman flying up the right wing. Kase joined the rush to create a 3-on-1 and perfectly received Willman’s pass in the slot to bury his first of the season at 13:46 into the game for a 1-0 lead. Lehigh Valley out shot Binghamton 7-3 in the opener twenty minutes. The period had started with a bang with Garrett Wilson of the Phantoms dropping the gloves with Ben Thomson of the Devils in the opening minute in a spirited bout to energize the teams.

Kase would have a couple more close-range chances in the second and another on the backdoor on the left of the cage in the third but Devils goalie Evan Cormier made some of his biggest stops against the third-year pro from the Czech Republic to keep the Devils in contention.

The Devils figured out how to break through a bit better in the second period and generated 12 shots on goal compared to the paltry three chances they had in the first. Lehigh Valley wasn’t exactly bereft of big opportunities either with 14 drives in the middle frame including a couple nice opportunities for rookie Zayde Wisdom.

Binghamton picked off a clearing try at the left point and fed a puck down low to an open Ben Thomson who had time to dangle around McInyre for a tying goal early in the third.

The Phantoms worked their way to a couple of power plays consecutively in the third period but couldn’t find a way to re-take the lead.

McIntyre made an acrobatic post-to-post denial in the opening seconds of overtime to rob a man on the back door. But off the ensuing faceoff, Seney showed why he was the team’s leading goal scorer a year ago with his rifle to the upper right corner to send the Devils to an overtime victory for a second game in a row.

The Phantoms continue their season-opening four-game road-swing in ChocolateTown on Sunday, February 14 for a Valentine’s matinee at 1:00 p.m. Lehigh Valley plays its season opener on Saturday, February 20 against the Binghamton Devils.