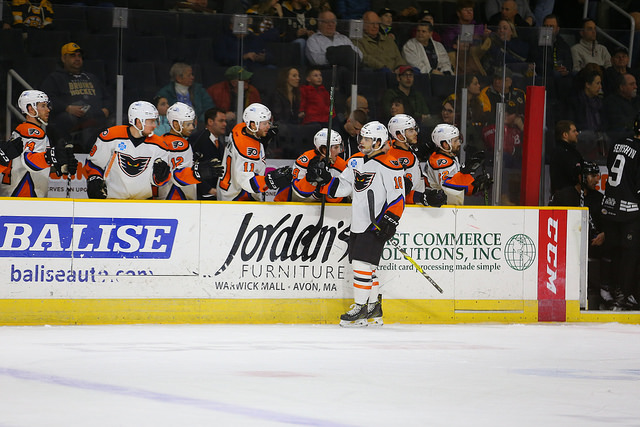 Providence, R.I. – The Lehigh Valley Phantoms officially locked in a spot in the 2018 Calder Cup Playoffs on Friday night with a 5-4 overtime loss at the Providence Bruins combined with a regulation loss by the Bridgeport Sound Tigers. The official clincher comes with still nine games remaining in the regular season. The Phantoms extended their point-streak to six games (4-0-2) while Providence pushed back for their first victory of the season against the Phantoms in three tries. The two teams will reamtch on Saturday night at Dunkin’ Donuts Center in Providence. 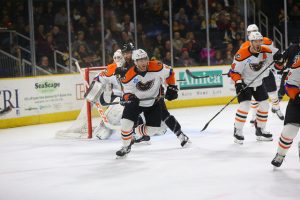 Ryan Fitzgerald scored a pair of goals for the Bruins including the overtime winner. The back-and-forth affair saw the Bruins continually witness their lead evaporate to the hands of the feisty and inspired Phantoms. Danick Martel (23rd), Corban Knight (14th), Greg Carey (28th) and Phil Varone (21st) all found the back of the net for Lehigh Valley while Colin McDonald and Misha Vorobyev had a pair of loud and emphatic near-misses via big shots off the iron. Dustin Tokarski made a number of fine stops in the back-and-forth affair to help secure the point and playoff berth.

Since January 20th, the Phantoms have just three regulation losses in 26 games boasting an impressive mark of 19-3-4 over the stretch while the team’s overall mark at 42-16-9 has vaulted the team to the top spot in the Atlantic Division.

Ryan Fitzgerald’s first of the night opened the scoring at 10:07 to break Lehigh Valley’s shutout streak at 167 minutes falling 41 shy of the franchise record set by the Philadelphia Phantoms in 2001.

Lehigh Valley had the first of their several quick responses just barely over two minutes later when Danick Martel pivoted with the puck from the right of the net and tossed a shot to the left post through the arm of goalie Zane Mcintyre for a 1-1 deadlock after one.

Providence thought they had taken the lead late in the first period when a deflection by Hennessy induced the red light to go on. But video-replay overruled the original decision of goal and determined that the puck was up against the post on the line and had never crossed. 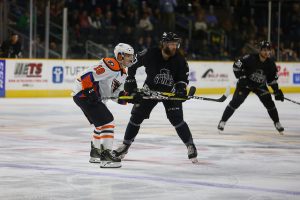 The two teams would exchange chances and trade goals back-and-forth through a more wild second period. Providence retook the lead at 2-1 just moments after Colin McDonald crushed a left circle slapper off the right post. Colby Cave (10th) finished some fancy passing rushing into the zone for a 2-1 P-Bruins lead.

Lehigh Valley counted just 121 seconds later when Tyrell Goulbourne connected on a stretch pass for a Chris Conner breakaway. A sparking denial off the left pad of McIntyre did not deny former fellow North Dakota teammate Corban Knight who scored on the rebound to forge a 2-2 tie.

Providence struck again just four minutes after that when newcomer Trent Frederic’s pass across on a 2-on-1 bounced right back to him for a little chip in for his first career professional goal.

But the Phantoms again did not take long for their counter. This time at 15:31 Greg Carey deflected a Phil Myers point shot on the power play for a 3-3 deadlocl. The goal was good for Greg Carey’s 100th as a pro.

The Phantoms again almost broke through for the lead when Steven Swavely was robbed on a spectacular sprawling stop by McIntyre who quickly popped to his skates to somehow also thwart the rebound put-back of Myers. That sparked the Bruins rush back the other way with Josh Hennessy (10th) converting with just over a minute remaining in the second period and a 4-3 advantage for the Bruins at the break.

Lehigh Valley kept pressing in the third period including a shot by Misha Vorobyev with 7:00 left off the cross bar. Finally the Phantoms pushed through for the equalizer when Phil Myers aggressive pinch from the right point kept the play alive. Colin McDonald in the left circle quickly found Varone on the backdoor who tucked in the equalizer around a helpless and spinning McIntyre with just 2:28 remaining.

The Phantoms almost scored the winner in overtime but Brennan’s rush up the left wing and subsequent shot just missed connecting. Eventually, McIntyre made a save on a follow-up shot and shoved the puck out to Fitzgerald who sped up the right boards, cut for the slot, and shot across the grain back to the right-wing post for the game-winner. 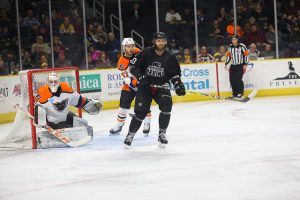 Providence out shot the Phantoms 34-31. Lehigh Valley was 1-for-3 on the power play while Providence was 0-for-2.