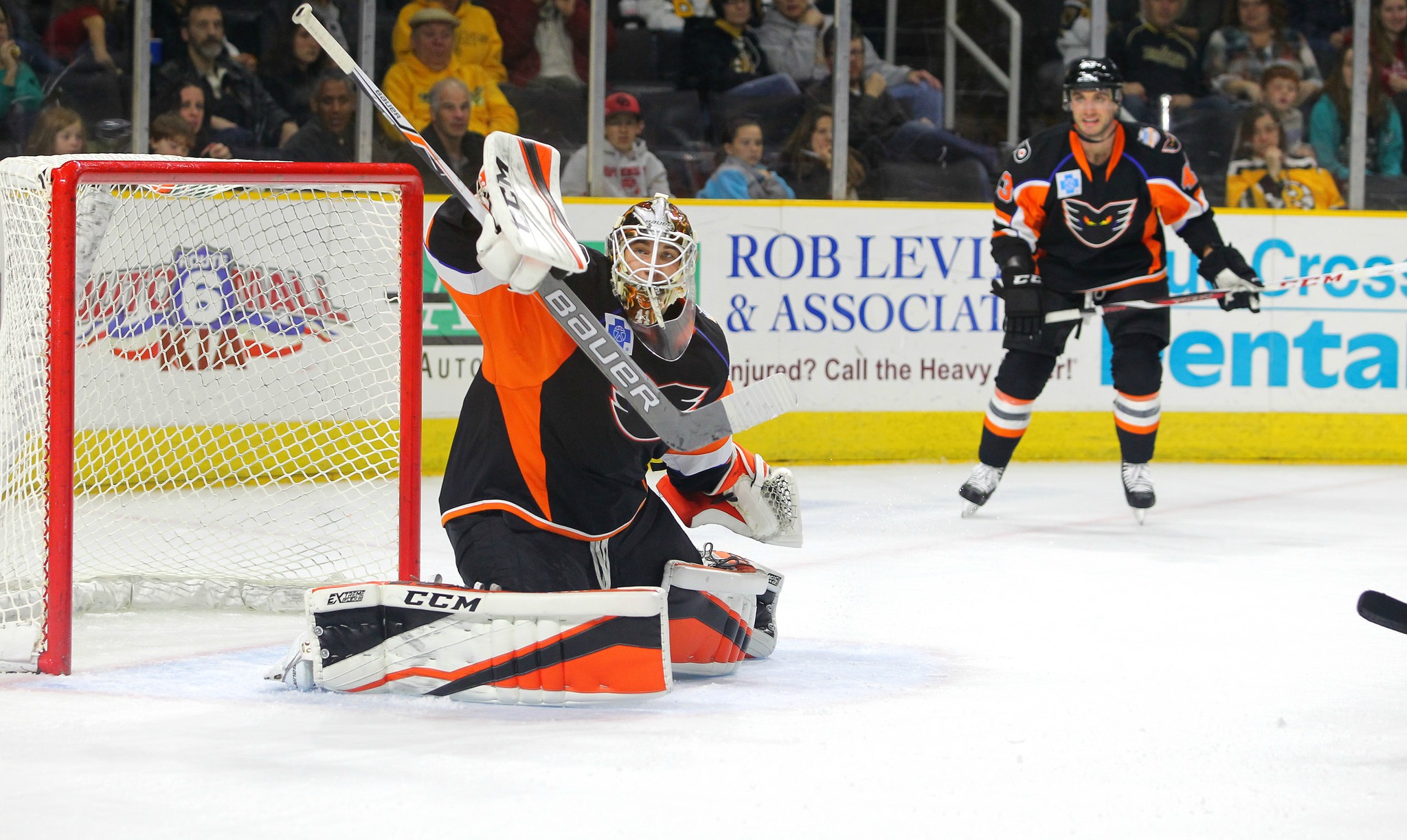 Providence, RI – Scott Laughton returned for his first game in a Phantoms sweater in over a year and sealed a Friday night 4-2 victory at the Providence Bruins with a late empty-netter. Laughton scored seven goals in 72 games with the Philadelphia Flyers last season and is now back with Lehigh Valley on a Conditioning Loan after sustaining a lower-body injury in the preseason.

Mark Zengerle (4th), Nic Aube-Kubel (2nd) and Greg Carey (4th) also scored for the Phantoms while Anthony Stolarz preserved the victory with a 27-save performance. Jordan Weal notched a pair of assists to move into second in the AHL with 12 points. The Phantoms again benefited from their potent power-play attack with a pair of man-advantage markers.

Lehigh Valley finishes its season-long five-game road-swing on the winning side of the ledger at 3-2-0 while improving its overall record to 4-3-1.

Weal worked a puck away along the right boards and connected crisply with Zengerle around the left dot who elevated a backhander over the shoulder of goaltender Malcolm Subban for a power-play goal at 7:44 into the first period.

Providence equalized on a tally by Anton Blidh at 16:36 and a more calmly paced opening 20 minutes concluded in a 1-1 tie with the Phantoms having out shot the P-Bruins by a 6-4 margin.

The second period would generate far more action for both netminders with both sides racking up 14 blasts on net. Lehigh Valley took the lead at 7:36 into the second period when defenseman Robert Hagg smartly poked the puck away from veteran forward Chris Porter at the Phantoms line. That sprung Radel Fazleev up the right-wing on a 2-on-1 who was able to draw Subban to his side of the ice setting up Aube-Kubel on the opposite side to bury his opportunity for his second goal in the last three games.

Travis Sanheim was blasted late in the second period by Colby Cave of Providence leading to a quick bout between Cave and Cole Bardreau. Sanheim popped up immediately and was okay. After the Cave roughing minor was assessed, the Bruins put themselves in a bigger hole with a Chris Porter high-sticking penalty.

Lehigh Valley successfully converted on their carry-over 5-on-3 attack with Greg Carey’s drive from the top of the right circle sneaking through the legs of Subban for a 3-1 lead. T.J. Brennan had a shot blocked moments earlier on the attack and Carey capitalized while the Bruins were still scrambling. Weal also earned his second helper of the night on the play at just 42 seconds into the third period.

Providence turned up the pressure late in the third and closed the margin back to one just as a power play of their own had expired. Jordan Szwarz drive from the right boards through a screen found the back of the net with 3:37 remaining and suddenly it was a one-goal game again.

The Bruins continued to pressure but finally Scott Laughton found a free puck just behind the Providence blue-line and was able to bury his backhander into the open net with 47 seconds remaining to clinch the victory.

Providence out shot the Phantoms 29-26. Lehigh Valley was 2-for-5 on the power play while the Bruins finished at 0-for-2.

The tilt was the first of six encounters this season between the two teams. The Phantoms will sojourn once again to Rhode Island exactly a fortnight later for a rematch on November 18.