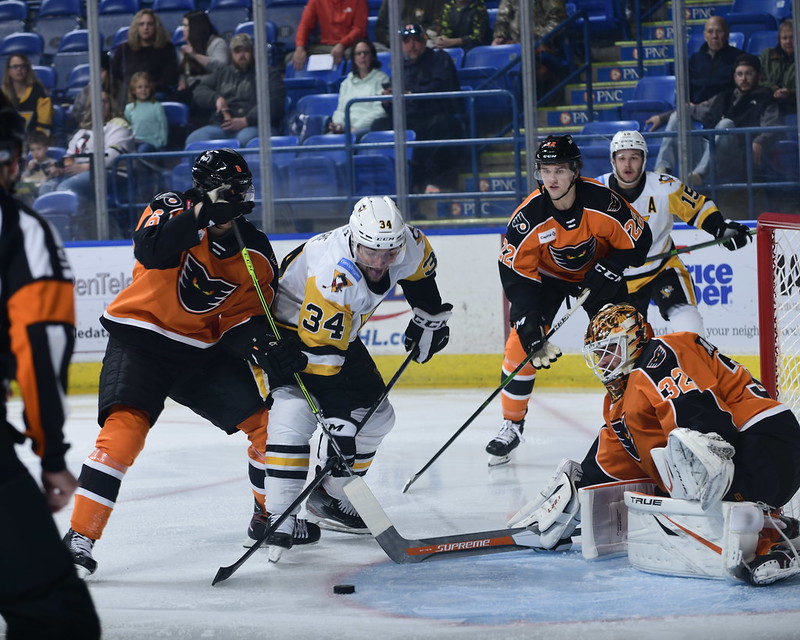 Wilkes-Barre, PA – The Lehigh Valley Phantoms raced out to a 2-1 lead at rival Wilkes-Barre/Scranton on Wednesday night but the Penguins surged back with the next three goals to take a 4-2 lead by the early minutes of the second period which they would eventually convert into a final score.

Gerry Mayhew (2) and Adam Cledending (1) had goals for the Phantoms in the wild, track-meet opening frame of the contest in which the Phantoms saw their 2-1 lead countered by late strikes from Michael Chaput and Radim Zohorna to give the host Penguins a 3-2 lead after the first period. 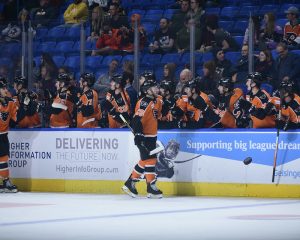 Zohorna scored a pair of goals to lead the attack for Wilkes-Barre Scranton (4-1-0).

Lehigh Valley (0-4-1) found its offense in the first period after Jamie Devane gave the Penguins the initial lead on the deflection of a Niclas Almari point-shot at 6:04 into the game.

Gerry Mayhew had an easy tap-in at the net-front for a power-play strike at 8:23 on some snazzy puck movement from Morgan Frost and Garrett Wilson who received the assists.

Then it was Maksim Sushko with the outlet pass to send Isaac Ratcliffe and Adam Clendening barging across the Penguins’ line with a 2-on-1. Ratcliffe carried the puck towards the middle from the left circle to draw the defenseman and then smartly slid the pass across to Clendening who was wide-open to pick his corner. He chose the upper-left area past the right shoulder of Filip Lindberg to give the Phantoms a 2-1 lead.

But Michael Chaput sniped on the power play from the right circle with 1:15 left in the wild opening frame to force a 2-2 tie and then Radim Zohorna rifled a shot under the right arm of Felix Sandstrom with just 2.4 seconds left in the first period for what held up as the decisive goal.

Zohorna would convert again on the rush on the power play on another assists from Valtteri Puustinen at 4:32 into the second period to extend the advantage to 4-2. 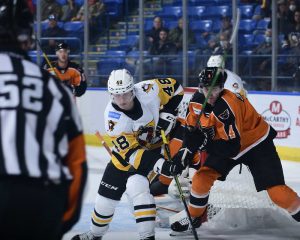 The Phantoms largely carried the better of the play for much of the second and third periods but were unable to break through against Lindberg (3-0-0) again. Lehigh Valley had three power plays in the the third period with some good looks and a great opportunity to cut into the lead and gain momentum but the rookie netminder, Lindberg, remained strong.

The Penguins out shot the Phantoms 25-22. Lehigh Valley was 1-for-5 on the power play while Wilkes-Barre/Scranton finished at 2-for-5.

The Phantoms travel to Utica to take on the Comets on Friday night in upstate New York .The Utica Comets are the former Binghamton Devils against whom the Phantoms went 8-1-4 last season.

The Lehigh Valley Phantoms return home on Saturday against the Syracuse Crunch in the debut of Saturday Niht Hockey Live featuring a between-periods live performance by Kendal Conrad. The Phantoms will then rematch against the Penguins at PPL Center on Wednesday, November 3. Tickets are available at PPLCenter.com