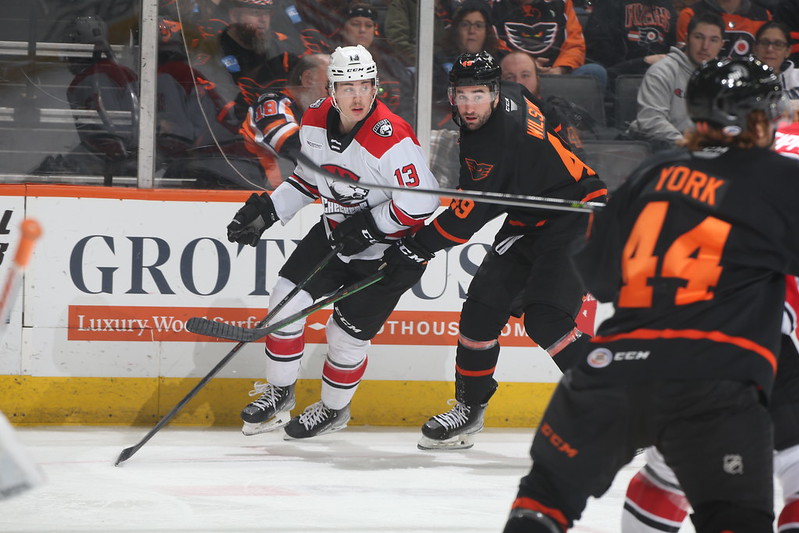 Lehigh Valley, PA – Cal O’Reilly (13th) and Morgan Frost (6th) broke through for a Phantoms team that had a large shots advantage throughout but the Charlotte Checkers made the most of their opportunities in a 5-2 victory at PPL Center on Saturday night.

Jackson Cates had a frightening injury in the opening minute of the second period when he was pushed into the end-boards while on a shorthanded rush. Cates left the game on a stretcher while giving a wave to the supporting crowd on his way out. He was being evaluated at the hospital.

Owen Tippett (2nd) and Dennis Cholowski (3rd) scored in the first period for Charlotte for a 2-0 lead. Tippett sniped from the right circle on the power play. Cholowski’s blast from the left wing beat Pat Nagle on the stick side.

Shortly after the Cates injury came a Charlotte goal for Chase Priskie on the same power play as Nagle was scrambling to find a rebound. Felix Sandstrom entered in relief of Nagle at which point Kole Lind worked into the open slot to accept a feed from a weaving Tippett that was blasted home for a 4-0 advantage.

The Phantoms surged back in the third period beginning with Cal O’Reilly’s backander from the right circle with his back turned which came on the rebound of a Tanner Laczynski shot. With Charlotte goalie Joey Daccord down to his knees, O’Reilly took a peek over his shoulder and got the Phantoms on the board barely more than two minutes into the final frame.

Lehigh Valley had some other nice pushes going but eventually Charlotte raced away on a 2-on-1 that became a 3-on-2. Felix Sandstrom made a terrific left-pad save on the back door but the rebound out to Carter Robertson was available for his first of the season and a 5-1 lead for the Checkers.

Wyatte Wylie offered a shot from way over at the right boards with Morgan Frost stationed to the side of the net on the short side. Frost sharply reached in front of the goal-line for enough of a tip to handcuff Daccord as the puck dribbled between the goalie’s legs and barely across the line for the final goal of the night with 11:44 remaining in the third.

Despite a continued strong push the rest of the way, the Phantoms could get no closer as the Checkers concluded their second consecutive 5-2 win in Allentown.

Lehigh Valley next plays on Tuesday night with a visit to the Hershey Bears.

The Phantoms return to PPL Center next weekend hosting the Laval Rocket on Friday, March 11 and the Hartford Wolf Pack on Saturday, March 12.