Lehigh Valley, PA – The Lehigh Valley Phantoms, proud AHL affiliate of the Philadelphia Flyers, are pleased to announce that defenseman Nick Luukko has signed an AHL contract for the upcoming 2015-2016 season. A 6’2″, 205-pound blueliner from West Chester, Pennsylvania, Luukko was inked by Lehigh Valley to an amateur try-out in late March of last season and appeared in six games with the Phantoms. 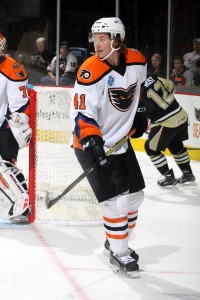 Before coming to Lehigh Valley, Luukko spent four years at the University of Vermont where he compiled eight goals, 27 assists, 35 points and 72 penalty minutes in 131 games with the Catamounts. The son of former Flyers President and current Florida Panthers President Peter Luukko, he was selected by Philadelphia in the sixth round (179th overall) of the 2010 NHL Entry Draft.