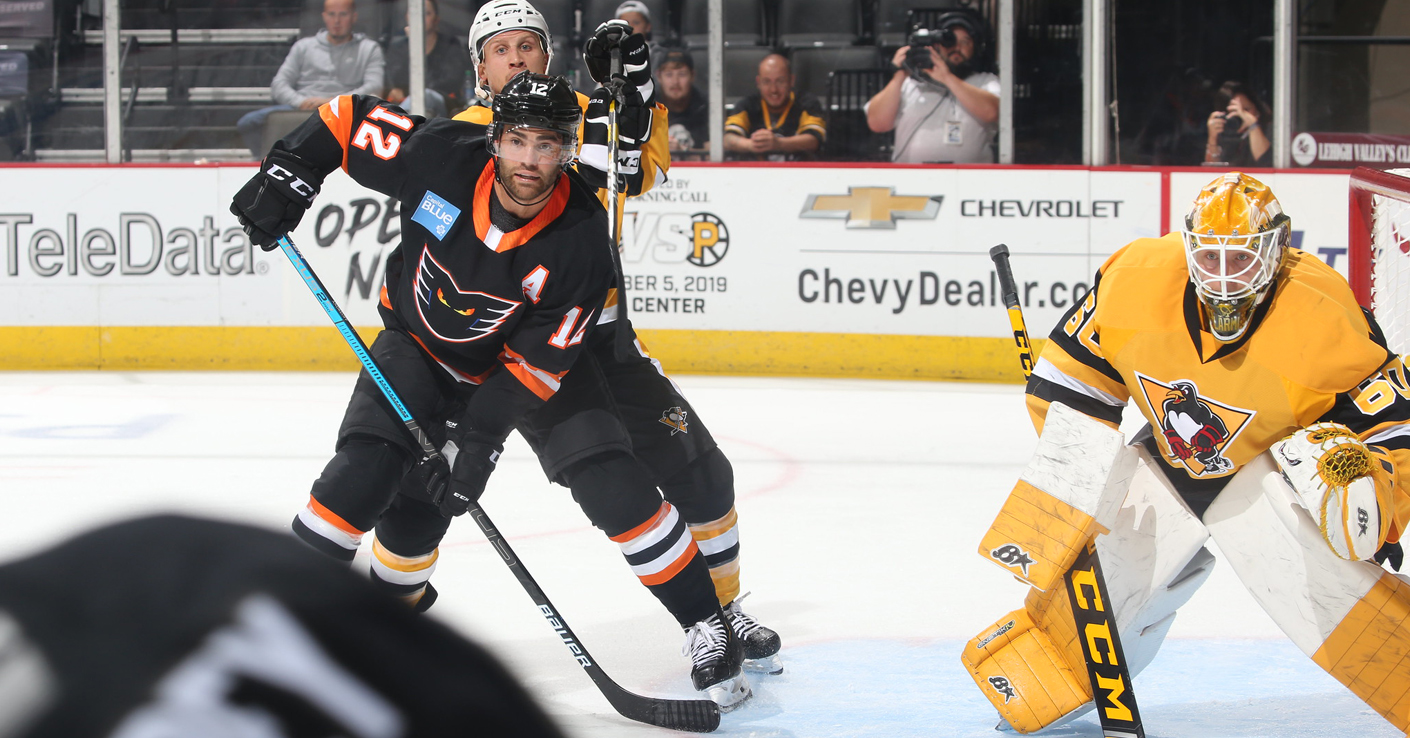 Lehigh Valley, Pa. – The Lehigh Valley Phantoms (2-0-0-0) got two-point performances out of both Andy Andreoff and T.J. Brennan on Sunday afternoon in a 3-1 victory over the Wilkes-Barre/Scranton Penguins (0-2-0-0) on Sunday in a preseason matinee at PPL Center. The Phantoms saw Andy Andreoff, Nic Aube-Kubel, and Mikhail Vorobyev all find the back of the net while goaltender J-F Berube was stellar in his first action on the ice as a Phantom making 22 saves.

After a quiet first 19 minutes of Sunday’s first period, the Phantoms were able to open the scoring in the game on the power play, thanks to a new face around PPL Center, forward Andy Andreoff. Andreoff was able to redirect a slapshot from forward Greg Carey past Penguins goalie Emil Larmi at the 19:26 mark. It was Andreoff’s first goal of the preseason, after he scored 26 goals last season for the Syracuse Crunch. 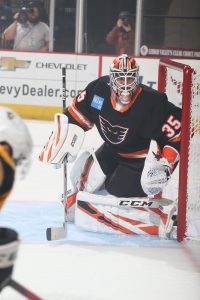 Phantoms goalie J-F Berube was solid in his first 40 minutes of preseason action, stopping all 13 shots that the Penguins sent his way in the first two periods. Berube spent the 2018-19 season with the Cleveland Monster, posting a 3.01 goals allowed average over 43 games.

The Phantoms started off the third period fast, swarming the Penguins net in the first minute. Their  aggressiveness would pay off when Andy Andreoff made a perfect pass to Nic Aube-Kubel in the left circle who sent a rocket past Larmi for the Phantoms second goal of the game and his first of the preseason. Aube-Kubel is set to begin his fourth full professional season and has totaled up 97 points in 203 games with the Phantoms so far in his career.

The Penguins would finally get past Berube late in the third period with a goal from forward Ryan Haggerty. Haggerty was able to capitalize on a loose puck in front of the net that found its way onto his stick and in result, past Berube for the Penguins lone goal of the game.

The Phantoms would strike back less than a minute later as Mikhail Vorobyev beat Larmi from atop of the left circle to make it a 3-1 game and to pick up his first goal of the preseason. Brennan picked up his second assist of the afternoon on the goal while Cal O’Reilly also had an assist on the goal. The goal from Vorobyev helped put a stop to any momentum the Penguins were looking to build.

In the last minute of the third period, the Penguins tried to garner a few scoring chances but were mostly denied by the Phantoms strong defense in front of the net. The Phantoms were able to hold onto their two goal lead and earned a 3-1 victory to move to 2-0 on the preseason.

The two heated rivals brought the intensity and physicality of a regular season contest for Sunday’s matinee. The two teams had to be separated multiple times with small scuffles and heavy hitting happening throughout the game. The Phantoms and Penguins will have plenty of time to settle any differences with 12 regular season matchups set between the two including six at PPL Center. Their first matchup of the regular season and at PPL Center is set for Friday, October 11th.

NEXT TIME OUT: The Phantoms will conclude their preseason schedule on Monday evening against the Hershey Bears at the PPL Center.