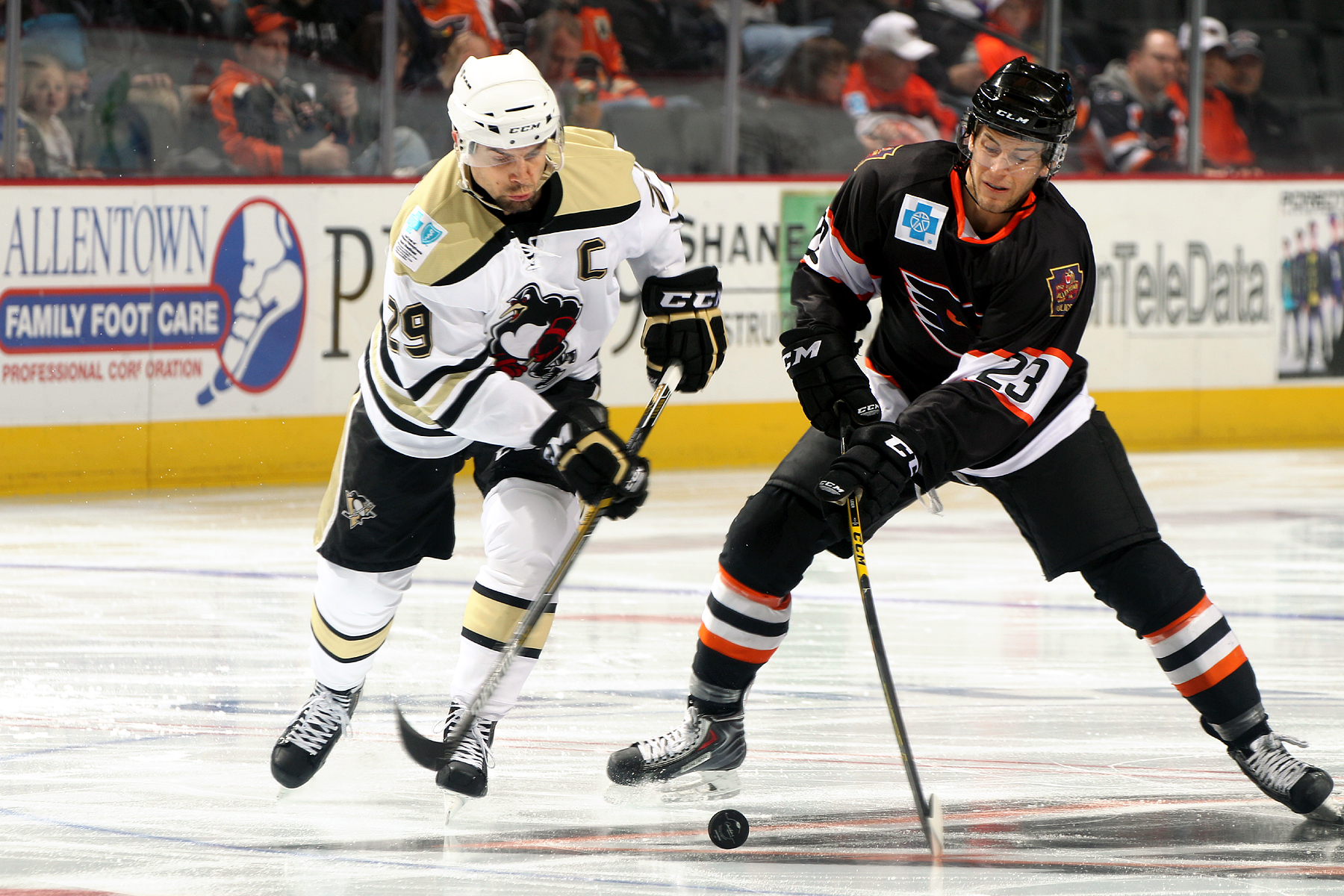 Lehigh Valley, PA – The Lehigh Valley Phantoms debuted their specialty Allentown Police Department jerseys Wednesday evening but it was Wilkes-Barre/Scranton goaltender Matt Murray who protected the Penguins all night long as the visitors served the Phantoms a 3-0 setback in front of 7,456 fans at PPL Center. The special sweaters were worn Wednesday evening and will be worn again during Lehigh Valley’s showdown this Saturday against the Norfolk Admirals before they’re auctioned off via a post-game auction following the conclusion of Saturday’s game. The proceeds from the auction will benefit the Allentown Police Department. 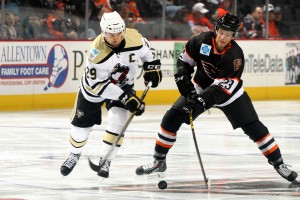 The setback for the Phantoms came just four days after Lehigh Valley suffered a 3-0 loss in Wilkes-Barre/Scranton but the effort Wednesday evening displayed marked improvement from the orange and black.

“I liked tonight a lot better than what it was in Wilkes-Barre,” said Phantoms head coach Terry Murray. “We competed. We had some better play in the offensive zone. More play, more quality chances. Overall, it was a better focused effort.”

After generating just 21 shots in last Saturday’s loss to the Penguins, the Phantoms produced 30 total shots on Wednesday but Murray, who was named earlier today to the AHL’s All-Rookie Team, had an answer for each offering as he garnered his league-leading 12th shutout of the season. Lehigh Valley received an impressive performance of its own in goal as Rob Zepp turned aside 29 of the Penguins’ 31 total shots as the 33-year-old netminder made his eighth consecutive start between the pipes for the Phantoms. 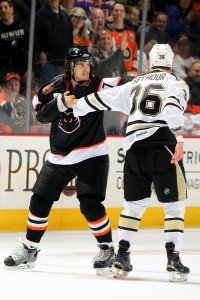 The Penguins opened the scoring less than five minutes into the rivalry showdown when Kapanen, the son of former Philadelphia Flyers’ forward Sami Kapanen and the Pittsburgh Penguins’ first-round selection in the 2014 NHL Entry Draft, gathered a loose puck at neutral ice before cruising into the Phantoms zone and snapping in his first career AHL marker. The unassisted even-strength strike came exactly 4:43 into the first period.

The Phantoms didn’t let Wilkes-Barre/Scranton’s early conversion get them down though as Lehigh Valley responded with sustained offensive pressure in the shifts that followed culminating in several glorious scoring opportunities orchestrated by the trio of Andrew Gordon, Scott Laughton and Taylor Leier that were miraculously turned away by Wilkes-Barre/Scranton goaltender Matt Murray. The Laughton/Leier/Gordon was so effective in the game’s opening frame that they accounted for seven of Lehigh Valley’s 13 total shots in the first period.

Zepp was able to keep the deficit at just a single goal early in the second period despite a tremendous scoring chance for Andrew Ebbett off a clear-cut breakaway. After blocking Gordon’s slap shot in the defensive zone, Ebbett was off to the races but his point-blank opportunity was expertly denied by Zepp.

The Penguins were able to double their lead prior to the close of the second period when, while on the power play, Kuhnhackl redirected Kapanen’s wrist shot from the left wing off the right goal post and into the back of the Phantoms goal. Danny Syvret earned the secondary assist on Kuhnhackl’s eighth tally of the year, which snapped a string of 18 consecutive successful Lehigh Valley penalty kills at PPL Center. Before Kuhnhackl’s conversion, the Phantoms hadn’t surrendered a man-advantage marker at home since Brendan Shinnimin’s power play tally 16:52 into the second period in Lehigh Valley’s 5-4 setback to the Portland Pirates back on March 7th. 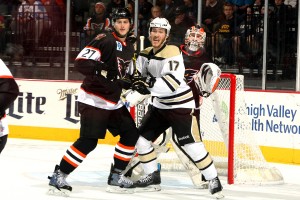 The Phantoms finished the evening 4-for-5 on the penalty kill and have now surrendered just two power play goals against over the team’s last nine home games going an impressive 32-for-34 (94.1 percent) during that stretch at PPL Center.

Wilkes-Barre/Scranton capped the scoring with just under two minutes left in regulation when, with Zepp on the bench in favor of the extra attacker, Kuhnhackl tossed his second goal of the game and ninth of the season into the vacated Lehigh Valley cage. 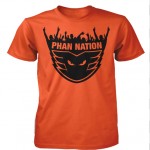