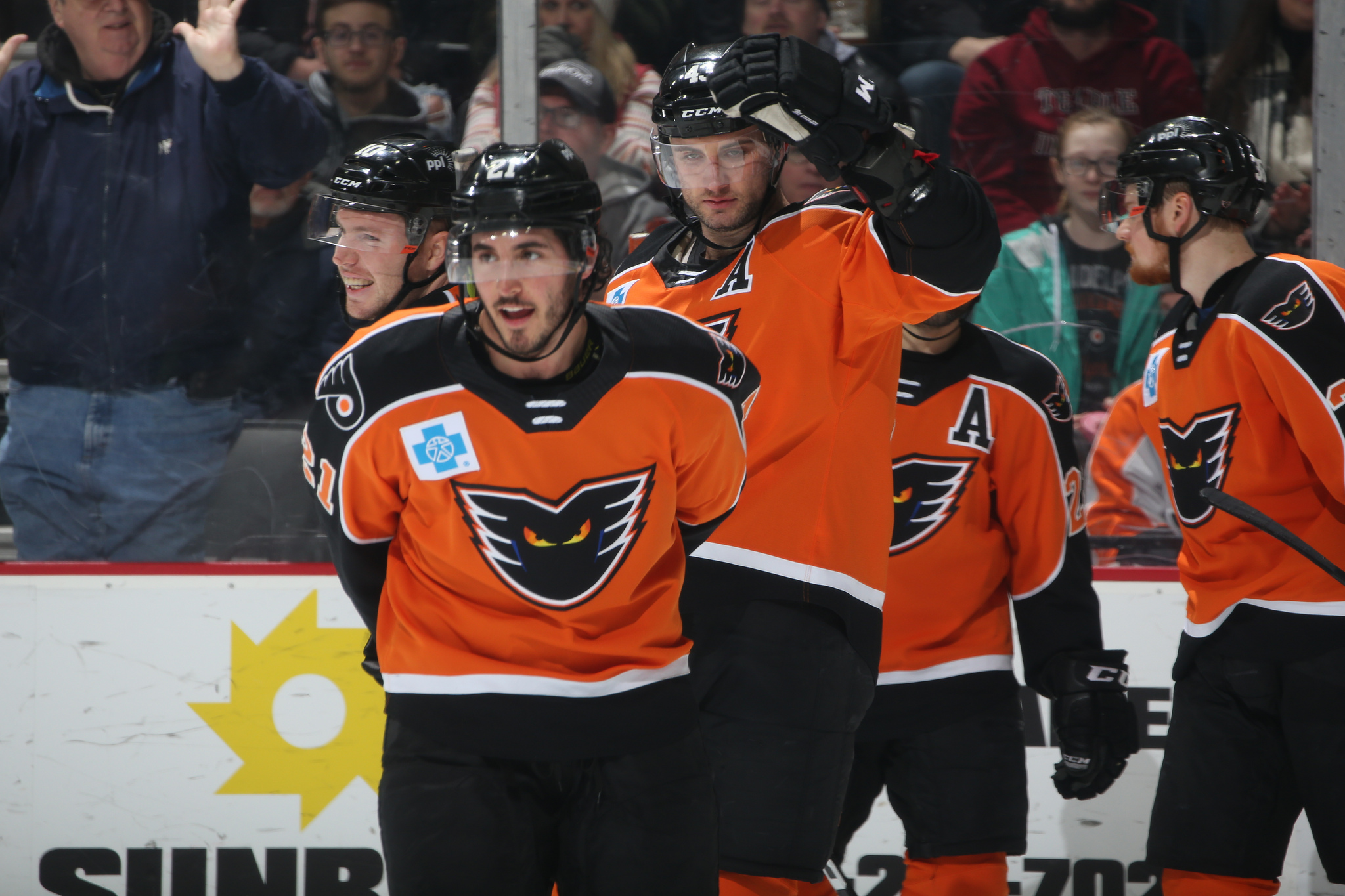 Lehigh Valley, Pa. – The Lehigh Valley Phantoms (30-24-3-3) held on to pick up a 3-2 victory over the first-place Charlotte Checkers (38-15-6-1) inside PPL Center on Friday night. Mike Vecchione led the way with his first two-goal game of the season, and now ranks tied for second on the Phantoms in goals with 15. Colin McDonald also scored for Lehigh Valley and Alex Lyon made 32 saves in the victory. The Phantoms are now 2-1 against the Checkers in Allentown and will meet again Sunday at 1:05

After missing the previous 35 games with an injury, Cole Bardreau returned to the Phantoms’ lineup and instantly made his presence felt. The feisty forward brought the energy Lehigh Valley fans have gotten used to seeing over the last five years, unloading eight hits on the Checkers and drawing two penalties, as well as helping to successfully kill off four Charlotte power plays. He was also second on the team with three shots on goal.

After a scoreless first period, the Phantoms’ fourth line continued to entertain as they brought the PPL Center crowd to their feet. Tyrell Goulbourne and Colin McDonald got loose behind the Checkers defense thanks to a great outlet pass from James de Haas. Goulbourne skated up the left side of the ice and slid a perfect pass over to Colin McDonald and the Phantoms’ captain buried his eight goal of the year.

Lehigh Valley struck again just five minutes later with a power-play goal from Mike Vecchione. Greg Carey fired a shot on Alex Nedeljkovic who was able to make the save but pushed the rebound right to David Kase. Kase found Mike Vecchione in front of the crease with an open net and Vecchione tallied his 14th goal of the season to give the Phantoms a 2-0 lead. 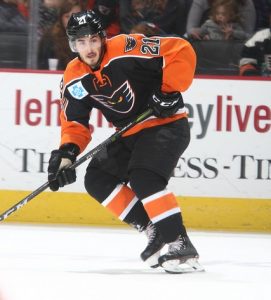 Vecchione kept the dominating middle frame going as he scored his second goal of the period to give the Phantoms a 3-0 lead. With Charlotte on a power play, Vecchione was able to get his stick in the passing lane and force a turnover. Mikhail Vorobyev fired the puck back to Vecchione who won the race against a Checkers defenseman and beat Nedeljkovic with a nifty move for the shorthanded goal. Vecchione picks up his first two-goal game of the season, and his team-leading second shorthanded tally. Vecchione’s first shorthanded goal came just two weeks ago, also against the Checkers on February 22 in Charlotte.

The Checkers got on the board 3:04 into the third period when Aleksi Saarela scored his 19th of the season. Josiah Didier fired a shot from the point and Saarela was able to redirect the shot enough to fool Lyon and end the shutout bid.

Charlotte cut the Phantoms lead to one on a 4-on-3 advantage about halfway through the third. Goulbourne and Poturalski each picked up matching minors for roughing, followed by a Vorobyev tripping penalty gave the Checkers their fourth power play of the game. Mike Vechione put in a heroic effort on the penalty kill, blocking two shots after breaking his stick but Charlotte was eventually able to get one by Lyon, as Saarela potted his second of the game.

Lehigh Valley was able to hang on to defeat the first-place Checkers 3-2 as Alex Lyon made 32 saves to pick up his 13th victory of the season.

NEXT TIME OUT: With Kelly Clarkson taking over PPL Center on Saturday, the Phantoms and Checkers will have a day to recover before they faceoff again on Sunday at 1:05 p.m. Stick around after the game, as fans will have the opportunity to take photos on the ice with the Phantoms players.