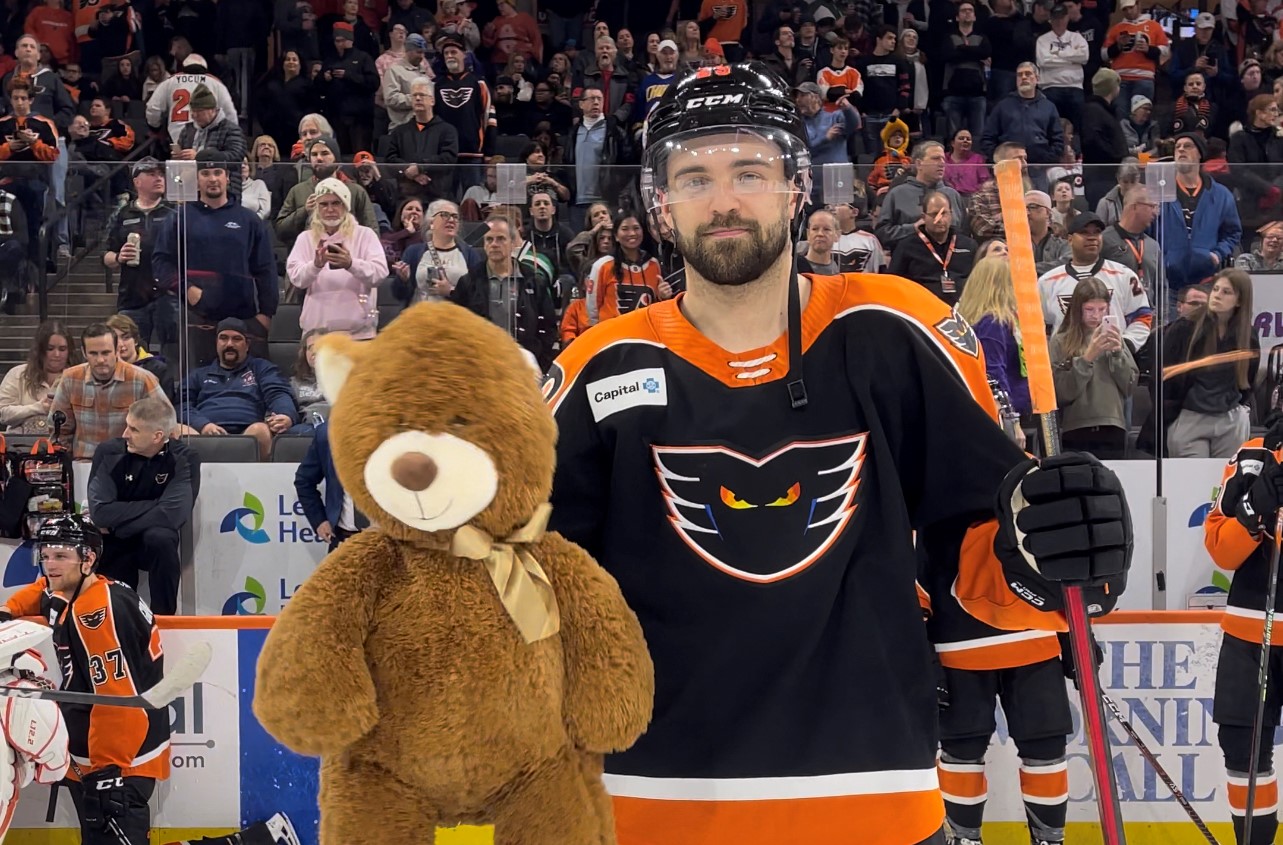 Lehigh Valley, PA- Cooper Marody sent the teddy bears flying through the air at PPL Center in one of the team’s biggest and most anticipated evenings of the season. But the Providence Bruins pushed back late for a come-from-behind 2-1 overtime win on Saturday night.

Vinni Letteri scored in overtime on a poke-check and steal. Joey Abate had tied it for the Bruins on a breakaway goal against Nolan Maier with 9:54 left. The Phantoms extended their point-streak to four gams (3-0-1) with the overtime decision as Lehigh Valley and Providence traded extra-time victories on each others’ ice during the weekend ome-and-home series. 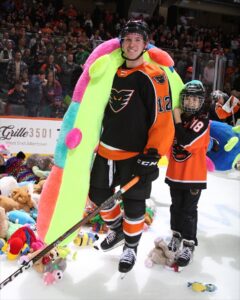 But it was Marody’s goal with 5:19 left in the second period that made the evening so special. Elliot Desnoyers won a faceoff and Garrett Wilson steered te puck back to Adam Ginning on the point whose shot was double-deflected y Desnoyers and Marody to bring on the crazy stuffed animal chaos. It was a long build-up of drama and anticipation with several close calls and great chances tantalizing the Lehigh Valley faithful before Marody finally broke through. It was the latest Teddy Bear Toss goal scored in Lehigh Valley history. The team has more recently had a trend of early scores on their Teddy Bear Toss Night but this one was more drawn-out with big stops by Providence goalie Brandon Bussi continually keeping the stuffed animals in the seats.

But finally, the big celebration came and the flying plushies inside the arena were yet again a terrific site to behold. Over 37,000 donated stuffed animals have been donated through the previous Teddy Bear Toss games in Allentown and thousands more will be added to that total during the team’s official count. After that will come the big Delivery Day with our friends at Valley Youth House.

Unfortunately for Lehigh valley (12-9-3), Bussi was otherwise perfect with 34 saves on 35 shots in continually denying some fantastic scoring tries throughout the night including several from right on top of him. Lehigh Valley was dominating in the game and outshot Providence 23-9 through 40 minutes while also limiting the Bruins to just four shots on goal in a stretch of about 34 minutes. But, despite the domination on the ice, the Phantoms were embroiled in a one-goal game and the Bruins finally found some chances of their own.

Providence (16-4-6) evened the score just past the midway point of the third period when Joey Abate picked up a stretch pass from Joona Koppanen near the Phantoms line and raced in behind the defense to beat Maier with a wrist shot past the blocker.

Lehigh Valley had a handful of chances to win the game in regulation, including the only power play opportunity of the game for either club, which began with 3:47 left in the third period, but the Phantoms couldn’t find a go-ahead goal.

Lehigh Valley also had two consecutive grand opportunities with less than 2 minutes left. Tyson Foerster got around Bussi but ran out of room to center the puck from the side of the net with the goaltender down and out. Then Artem Anisimov intercepted a pass near the Bruins’ blue line and fired a hard wrister on Bussi who held on to send the game to overtime.

In the extra session, the Phantoms won the opening face-off, but Vinni Lettieri stole the puck near the Phantoms blue line and scored past the glove of Nolan Maier with 4:08 to go to lift the Bruins to the win.

Lehigh Valley has a quick turnaround to wrap up the weekend with a 5:00 start Sunday evening at the Hershey Bears. The Phantoms return home for a mid-week rematch with Hershey on Wednesday at PPL Center.