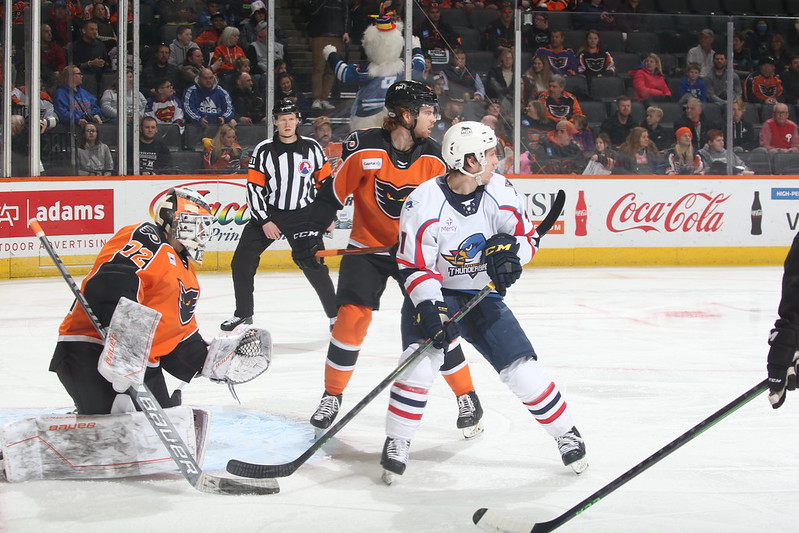 Lehigh Valley, PA – Tanner Laczynski returned to action for his first games of the season and scored the Phantoms’ lone goal on Sunday afternoon in a hard-fought 3-1 loss against the first place Springfield Thunderbirds in the final game of Lehigh Valley’s six-game homestand.

James Neal (4th) scored the late winning goal in the third period to break a 1-1 tie and Nathan Walker added an empty netter.

Laczynski made his season debut on Saturday against Utica and was playing just his second game of the season after being sidelined for the last five months following hip surgery during Training Camp in September. The talented sixth-rounder out of Ohio State appeaed to pick up right where he left off last year with several solid plays, pick-offs, and scoring chances.

Kiril Ustimenko (0-3-1) put forth another solid effort between the pipes with 29 saves on 31 shots.

Ustimenko made several key stops in the first period and his teammates blocked some others as Lehigh Valley and Springfield battled to a 0-0 deadlock in the first 20 minutes. Springfield out shot the Phantoms 10-5 in the opening frame.

A rebounding puck off the left pad of Ustimenko found an open Drew Callin on the backdoor for his fourth of the season and the first goal of the game early in the second.

Lehigh Valley was still hanging on in their efforts to keep it a one-goal game.

A Springfield (26-14-7) turnover at the side of their own net turned into a quick chance for Laczynski midway through the second period which he buried past goalie Charlie Lindgren for a 1-1 tie.

The Phantoms built on that momentum with 10 more shots on goal in the subsequent nine minutes with several quality chances and close calls to taking the lead themselves.

Springfield eventually broke through at 8:25 into the third period when James Neal offered a perfectly placed shot from the left circle to the upper far corner that Ustimenko couldn’t stop. The three-time NHL All Star has scored four goals in just four games since joining the Thunderbirds after clearing waivers from St. Louis.

Nathan Walker (18th) added a late empty-netter for the Thunderbirds to finish the scoring as Springfield improved to 3-0-0 against the Phantoms this season.

The Phantoms next hit the road for three straiht beginning Wednesday night at the Wilkes-Barre/Scranton Penguins and continuing Friday night and Saturday afternoon at the Cleveland Monsters.

The Phantoms return to PPL Center on Wednesday March 2 against the Providence Bruins and will also host the Charlotte Checkers back-to-back on the team’s 25th Anniversary Celebration Weekend with a pair of games on Friday, March 4 and Saturday, March 5.