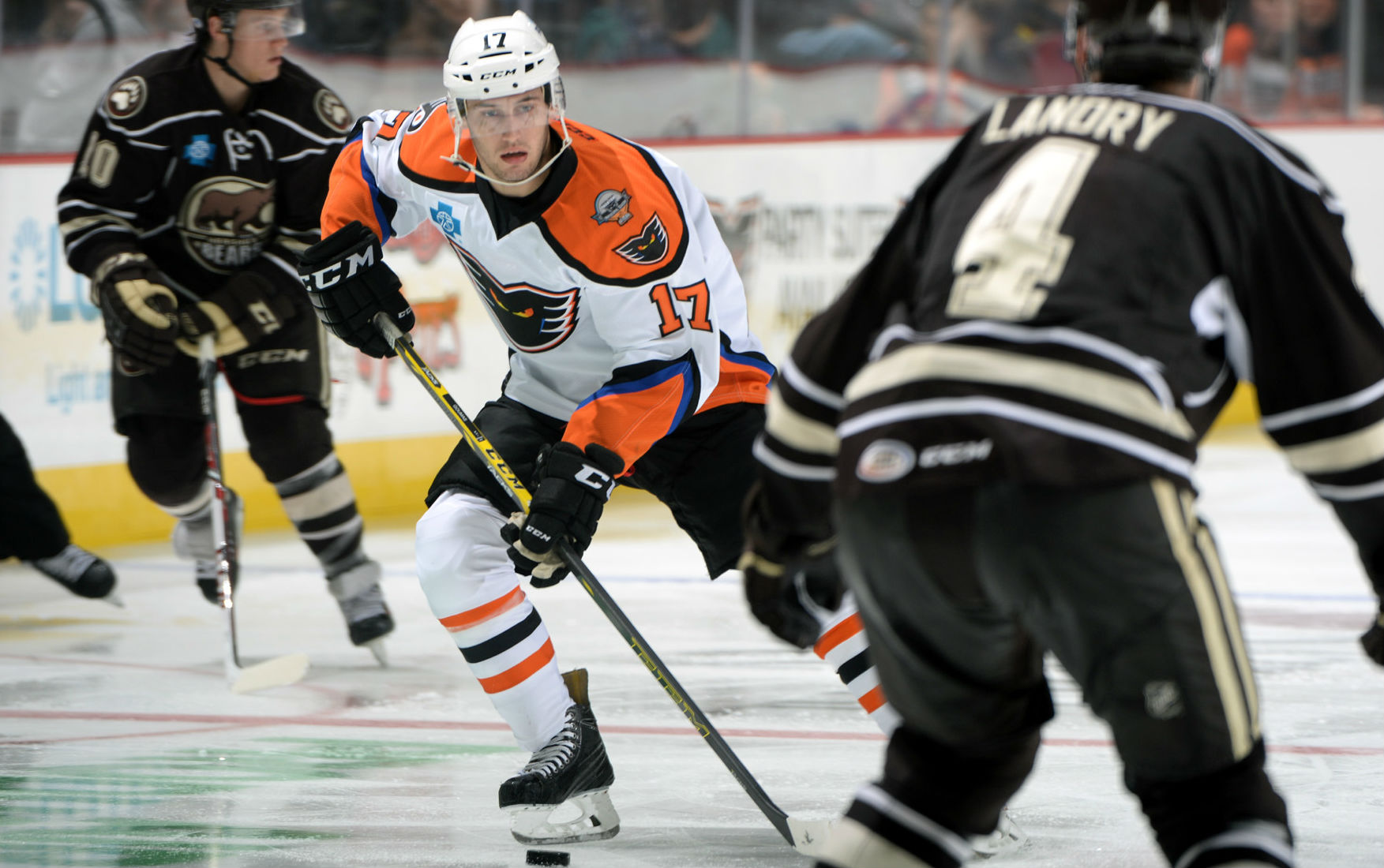 Hershey, PA – Kevin Goumas in the left slot scored an overtime-winner off an impressive cross-ice pass by Nick Cousins from the right boards to conclude a thrilling 5-4 triumph for the Lehigh Valley Phantoms on Sunday evening at Giant Center in Hershey. The fourth overtime victory of the season capped a wildly exciting battle between the Keystone State rivals and was the first victory in ChocolateTown for the Phantoms.

Hershey battled back from one-goal deficits to force tie scores on four different occasions. The Phantoms never trailed. But on the last goal the Phantoms scored there would be no further opportunity for the East-Division leading Bears to equalize again.

Jay Rosehill secured his second career multi-goal game with his fourth and fifth tallies of the season. Three of his five goals this year have come at Giant Center. This performance came EXACTLY two years after his only other other two-goal game in the AHL. On February 8, 2013 Rosehill had a pair of goals for the Norfolk Admirals in a victory over the Wilkes-Barre/Scranton Penguins.

Robert Hagg celebrated his 20th birthday with a pair of nice assists while Nick Cousins registered his team-leading 15th goal of the season and Jason Akeson tallied with a backhander after a brilliant move through the Hershey defense for his 12th of the year extending his goal-scoring streak to four games.

Anthony Stolarz made a number of showstopping saves on way to his seventh victory of the season. While he was turning aside one Hershey drive after another, little did he know he was going to be recalled by Philadelphia following the game. Flyers general manager Ron Hextall informed the Flyers media in Washington D.C. while the Phantoms were still in the second period of their game in Hershey that Stolarz would be on his way up and would meet the Flyers in Montreal for Philadelphia’s next game on Tuesday. The 21-year-old rookie Stolarz was not made aware of his first ever NHL call-up until after the Phantoms game was complete.

The Phantoms scored their fourth overtime winner of the season and third on the road. Kevin Goumas joins Brandon Manning (October 17 vs. Adirondack), Scott Laughton (October 25 at Binghamton) and Nick Cousins (January 2 at Norfolk) in the select group. Lehigh Valley improved to 4-4 in overtime games and 8-5 in all decisions decided after regulation (which includes a 4-1 mark in shootouts).

A rookie from the University of New Hampshire, Goumas celebrated his first professional overtime goal in almost expressionless or stoic fashion as he casually glided backwards to the corner glass where he awaited his celebrating teammates.

The Phantoms’ victory came despite the early loss of one of their leaders. Alternate captain Zack Stortini received a game misconduct just 8:35 into the game when trying to pull away his stick during a scuffle with Garrett Mitchell. The stick inadvertently made contact with the linesman who was trying to intercede and Stortini was thus headed to the showers on the “abuse of officials” call.

Lehigh Valley struck first at 12:01 into the game on a fine pass from the right boards by Brett Hextall connecting with Jay Rosehill in the slot for a perfect chip through the blocker-side of Copley. Austin Fyten also assisted on the play with a poke-away from a defenseman in the right circle. The goal came almost immediately on the other side of a key penalty-kill, the first of six straight on the day for Orange and Black.

Hershey would tie the score with a shorthanded breakway goal at 19:09 as captain Dane Byers converted on their 2-on-0 rush after some back-and-forth with teammate Jim O’Brien.

Just 20 seconds later, the veteran Rosehill would strike again, this time sharply deflecting a left-point drive by Robert Hagg that was also helped by Steven Delisle. The Phantoms led 2-1 at the first break.

Stan Galiev scored on a big blast in the slot in the opening seconds of the middle period to forge a 2-2 tie. And the Bears were threatening to turn the tide a few minutes later with a 5-on-3 opportunity. but on the strength of three fine saves off the right-leg of Stolarz, the Phantoms were able to scramble their way through the difficult penalty kill. And for the second time in the game were able to capitalize on their penalty-kill success and turn the momentum into a goal back the other way.

Lehigh Valley would retake the lead at 11:08 right on the other side of that 5-on-3 kill with reigning AHL Player of the Month Nick Cousins burying his chip in the slot on a nice give by Brandon Alderson from the left circle. Cousins with his 15th of the season now re-takes sole possession of the team-lead in goals from Andrew Gordon.

Hershey evened the score again with 2:15 left in the second period on a 3-on-3 rush into the Phantoms zone with Jim O’Brien’s cross-ice give connecting with defenseman Tomas Kundratek on the backdoor.

Lehigh Valley retook the lead one more time taking advantage of their carry-over power-play opportunity to open the third period. Jason Akeson weaved and dangled his way around a Hershey defenseman, cut towards the Bears goal, then pulled the puck around to his backhand for a highlight-reel caliber goal past Copley’s blocker. Akeson’s 70th career goal with the Phantoms is eighth-most in team history and is four away from Mike Maneluk for seventh-place all-time.

The equalizer for Hershey would come on another breakaway with Chris Brown this time the beneficiary notching his 12th of the season with 9:33 to go in the third. The rest of the period saw some sparkling stops from both Copley and Stolarz who pushed this game to overtime. Stolarz made three more saves in the extra period before Cousins would wheel around in the zone and connect perfectly with Goumas for the game-winner.

After that, both teams would enjoy power-play opportunities in the closing minutes of the third. But the Phantoms were unable to strike again against Copley. And then Lehigh Valley successfully killed off a potentially costly too many men penalty they were assessed with just 5:02 left with a couple more nice stops from Stolarz along the way.

The Phantoms improved to 22-20-5 with the victory while the first-place Hershey Bears extended their point-streak to 10 games (8-0-2) with the overtime loss. Hershey out shot the Phantoms 40-39. The Phantoms went 1-for-5 on the power play while holding Hershey to 0-for-6.

Goaltender Connor Knapp was recalled from Reading before the game and served as backup to Anthony Stolarz. Rob Zepp missed the game following an injury in Friday’s game at Binghamton.

Lehigh Valley improved to 4-5-0 in the rivalry series against the Hershey Bears with three more encounters on the docket in the 2014-15 regular season. The Phantoms return to Giant Center on March 1. Hershey’s sixth and last appearance at PPL Center will take place on April 14.

The Phantoms return to PPL Center on Friday to host the Binghamton Senators on Cap Night presented by Service Electric. All fans in attendance will receive FREE Phantoms Ball Caps! Tickets are available at PPLCenter.com or by calling 610-347-TIXX (8499) or in person at the Mealey’s Furniture Box Office inside PPL Center.