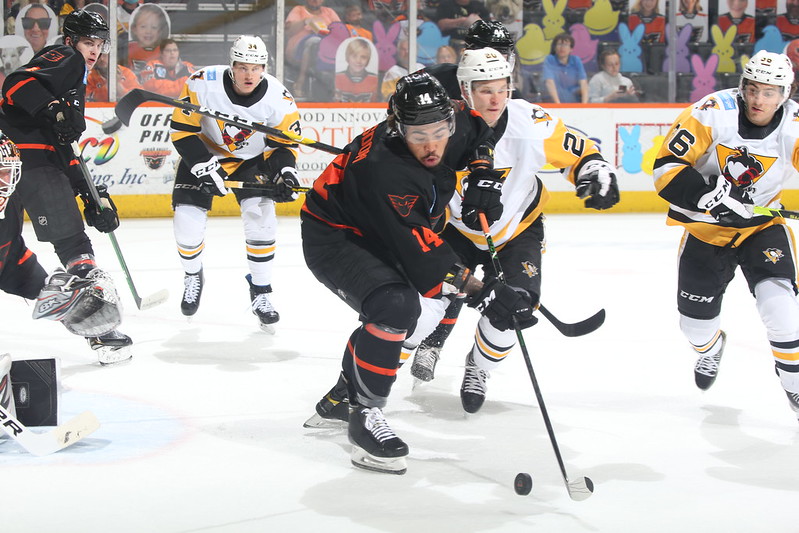 Lehigh Valley, PA – Hitting and fighting and a distaste of each other befitting the Phantoms vs. Penguins rivalry were all on display in front of a roaring crowd that sounded like over 8,000 even if the allowed number inside was only a fraction of that. The Penguins prevailed in overtime 2-1 to claim the last meeting of the season after the two closely located opponents went to extra-hockey for a sixth time in eight meetings this year. The Phantoms finished 4-1-3 against the Penguins in the 2021 season.

Wade Allison and Max Willman both found agreeable participants to drop the gloves while Garrett Wilson knocked a Penguins player into the Phantoms’ bench and Tanner MacMaster delivered a third-period hit that brought a huge roar as well. It was playoff-intensity style hockey in an unusual season with no playoffs.

Ryan Fitzgerald scored the lone marker for the Phantoms on a slick connection up ice from Chris Bigras to Zayde Wisdom who sent Fitzgerald in for a breakaway tying goal in the third. Fitzgerald’s 11th goal of the season puts him into sole possession of the team lead. And it came mere seconds after Wade Allison had his first pro fight when he dropped the gloves with little Felix Robert after some previous tangles and hits with P-O Joseph. Allison rose to his feet and was cheering while all alone in the penalty box after Fitzgerald scored the goal after his own momentum-changing bout.

Kasper Bjorkqvist scored his first goal of the year on the rebound of a Jordy Bellerive drive to the net to put Wilkes-Barre/Scranton ahead at the end. Jonathan Gruden had scored on the backdoor in the first period on a feed from Drew O’Connor to give the Penguins the initial 1-0 lead that lasted until the third.

Max Willman took exception to a hit from Cam Lee in the third period and similarly dropped the gloves for his first AHL fight. The physicality and intensity seemed to be contagious in one of the most entertaining games of the year.

In the first two periods,  Phantoms’ goalie Zane McIntyre made some strong tops, particularly on the penalty kill, to keep the Phantoms within a goal. One save in the second period that rated among his best of the night had him scrambling to his left to get to a big one-time blast on the backdoor by Will Reilly that brought a big cheer from the crowd.

Connor Bunnaman had a glorious chance in front of the net slamming home a Cal O’Reilly feed from behind the goal but Penguins’ goalie Alex D’Orio made the big stop to keep the game tied.

The Phantoms had a power play with 2:13 left in the third with a chance to win the game but the Penguins held strong. One big blast from Derrick Pouliot just missed the net and another big one-timer with just 30 seconds remaining was swallowed in by D’Orio who had the angle played correctly.

Lehigh Valley had just rushed into the zone on their own odd-man rush but that opportunity fizzled out and turned into a Penguins’ 2-on-1 that led to the winning goal to finish the exciting battle.

The Phantoms return to PPL Center on Sunday at 3:05 p.m. against the Binghamton Devils in the season finale. After that, it will be on to preparing for the 2021-22 season for the Phantoms players and staff. The American Hockey League has announced that its 86th season will run from October 15, 2021 through April 24, 2022.