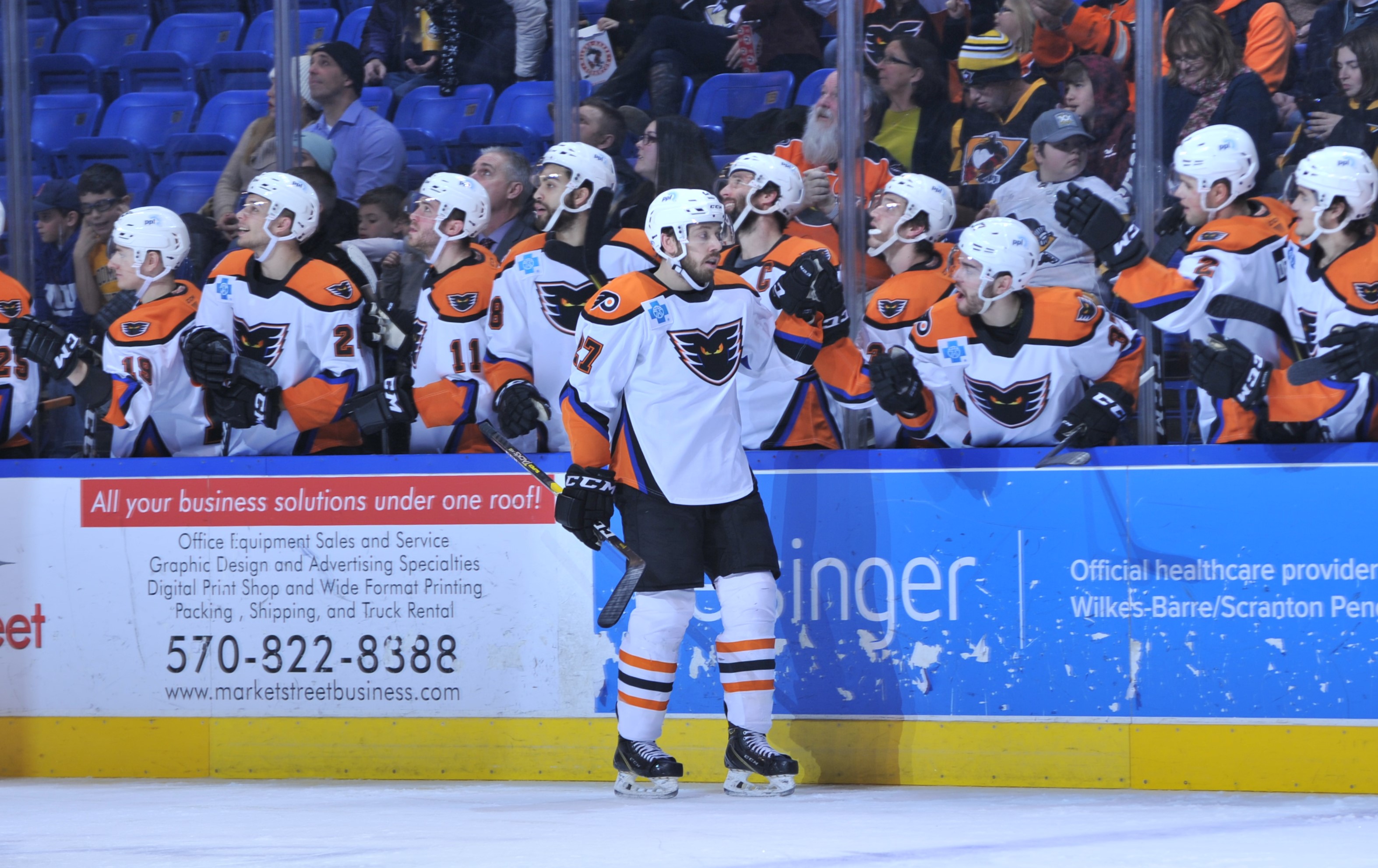 Wilkes-Barre, Pa. – For the third straight game, the Lehigh Valley Phantoms (22-15-3-2) needed beyond the 60 minutes to decide the outcome, however they were unable to secure the second point this time as they fell 2-1 in overtime to the Wilkes-Barre/Scranton Penguins (20-18-4-1) at Mohegan Sun Arena. A depleted Phantoms squad, playing with only 17 skaters (10 forwards, 7 defenseman) due to injuries, was able to battle and earn a point, largely in part thanks to a 44 save performance from goaltender Anthony Stolarz. Mike Huntebrinker scored the lone goal for the Lehigh Valley, the first AHL goal of his career. 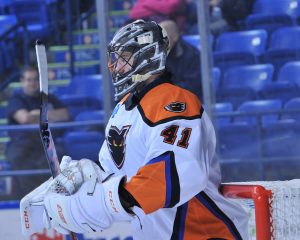 The Phantoms once again relied on superb play from their goaltender to keep them in the game, despite the uneven shot count during the first two periods. Anthony Stolarz made 32 saves on 32 shots through the first two periods (15 in the first, 17 in the second) to keep Wilkes-Barre/Scranton off the scoresheet. Tristan Jarry only had to make 17 saves but was also perfect through the first 40 minutes as we headed to the third period scoreless.

The Phantoms started to apply the pressure on the Penguins during the final three minutes of the second period but were unable to find the back of the net. Steven Swavely had a close chance at a rebound in front of the crease late in the second but was unable to control it in time to beat Jarry sliding across the goal line.

Play took a while to heat up on a frigid Monday afternoon, but four minutes into the third period Mike Huntebrinker, the shootout hero from Saturday’s game, finally broke the ice to give the Phantoms a 1-0 lead. Huntebrinker corralled a pass from Mike Vecchione and ripped a rolling puck off the post and in for his first AHL goal. Huntebrinker has played nine games this season for Lehigh Valley after spending the past two seasons with the Reading Royals in the ECHL.

Wilkes-Barre/Scranton was able to tie it with 8:56 remaining in the third on their 38th shot of the game. Adam Johnson was able to get to a loose puck down near the red line and somehow snuck a tough-angle shot past a diving Mark Friedman and Anthony Stolarz to even the game back up at 1-1.

As the clock creeped down to under a minute remaining in overtime, Ethan Prow was able to push a loose puck over the goal line to earn the Penguins the second point in the sixth meeting (of 12) between the Pennsylvania rivals. The two teams don’t meet again until March 6.

Lehigh Valley went 0/2 on the power play and Wilkes-Barre/Scranton went 0/3.

NEXT TIME OUT: Lehigh Valley will return to PPL Center on Wednesday January 23, to face their other in-state rival, the Hershey Bears at 7:05. Tickets can be purchased to the game HERE.