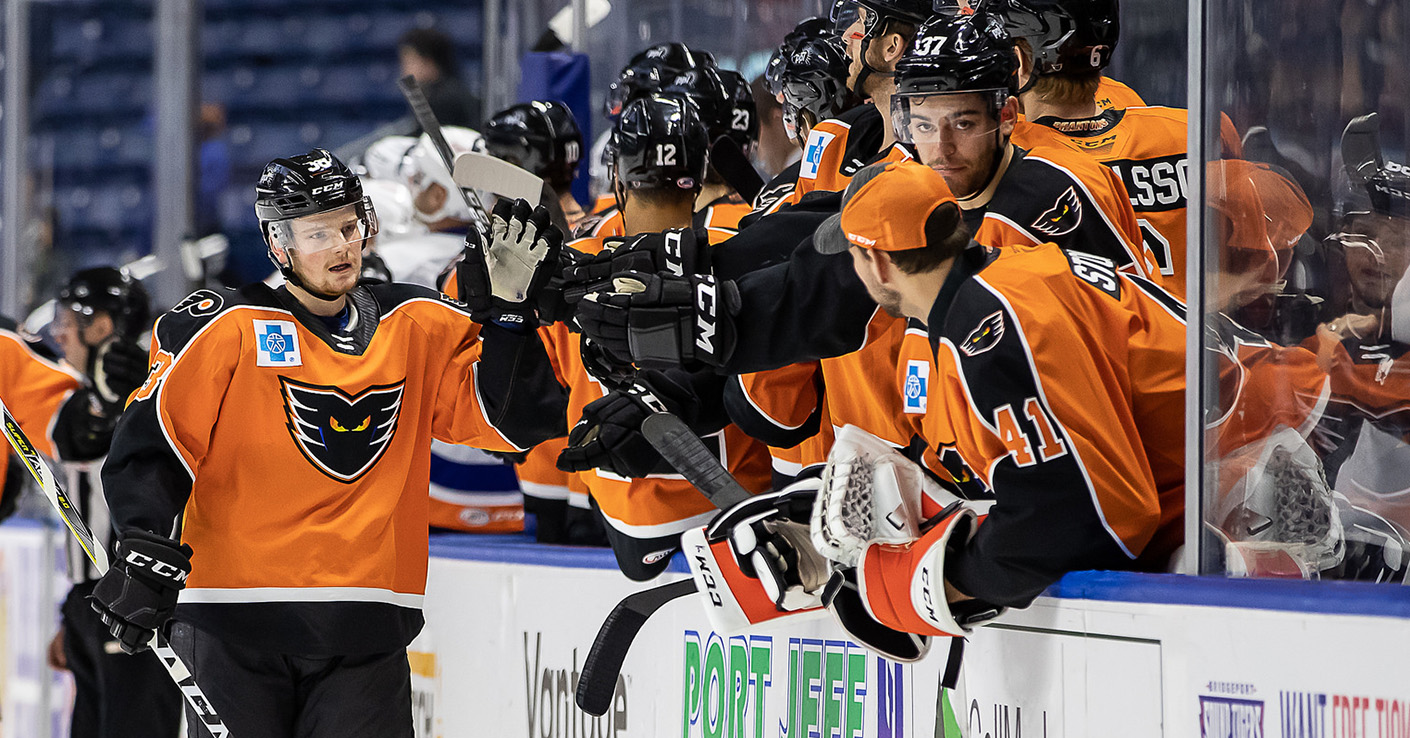 Acclimating yourself and settling in with a new team can be a tough experience for any young player.

But imagine doing it when you don’t speak the same language.

For several young players on the Lehigh Valley Phantoms roster — David Kase, Mikhail Vorobyev and German Rubtsov — it hasn’t been the hockey that’s been the tough part to adjust to in North America, but their life away from the rink that has been the challenge.

“Hockey is hockey,” said the 21-year-old Kase, who hails from Kadan, Czech Republic. “It’s just skating and scoring goals. All my life I have been doing this and it’s easy. It doesn’t matter if I play hockey in the [Czech Republic], Sweden or here. It’s more easy to play hockey than doing things outside [of the rink].”

Kase, who spent the last year playing in Sweden, went through a similar, and arguably tougher, transition just a season ago.

“Last year was my first year from my hometown,” he said. “Everything was different because I was living by myself. I did everything alone. Cooking, filling out papers and it was different than my years in the Czech Republic.”

Luckily for Kase, who currently ranks eighth on the Phantoms with 10 points (four goals, six assists) in 15 games this season, his older brother has already gone through a lot of the same experiences.  Ondrej Kase, who is playing in the NHL for the Anaheim Ducks, has been in the United States for the past four seasons and provided his younger brother with some words of wisdom before coming to America.

“He told me before my coming here that the first month it will be hard for you because everything is new. He said, ‘Don’t stress, the team will help you and your girlfriend will help you.’ He told me just focus on hockey, play your game and everything [will come later].”

While those words of advice have certainly helped the younger Kase brother, there are some parts of life that not even the highest level of preparation can help you avoid, whether you are an American citizen or not.

“I needed some special card for USA, [that had] information about me living here. I was waiting [at the DMV] for two hours. It was crazy.”

While Kase may be the lone Czech on the roster, Mikhail Vorobyev, a native of Ufa, Russia, has some fellow countrymen to help him in his transition to North American life. Rookie forward German Rubtsov and third-year pro Radel Fazleev are going through, and have gone through, a lot of the same challenges that the 21-year old is currently facing.

That support network between the “Russian Bash Brothers”, a nickname given by Phantoms forward Greg Carey, is something that Phantoms head coach Scott Gordon believes can help all three.

“I’m sure there’s a little safety net there,” Gordon said. “It’s always nice to be able to speak your language and when you don’t have that opportunity every single day it can probably grind on you a little bit. I’m sure they talk about things with their country and what’s going on over there. So maybe it makes it feel a little bit more like home as opposed to just being away and on your own and feeling like you are on an island at times.”

While Vorobyev’s English is vastly improved from his rookie season, thanks to a tutor and the help of his teammates, he said that his fellow Russian, Fazleev, played a huge part in adjusting to America.

“It wasn’t hard for me because we have a couple Russian guys in the system,” Vorobyev said. “My first season Radel Fazleev helped me and is help for everything for me.”

When asked about whether or not having some additional players from the Motherland was helpful for him, Vorobyev was quick to point out that it certainly does eliminate some of the homesickness.

“Yeah, it probably does help,” he said. “Because we can speak the Russian language and it feels like home.” 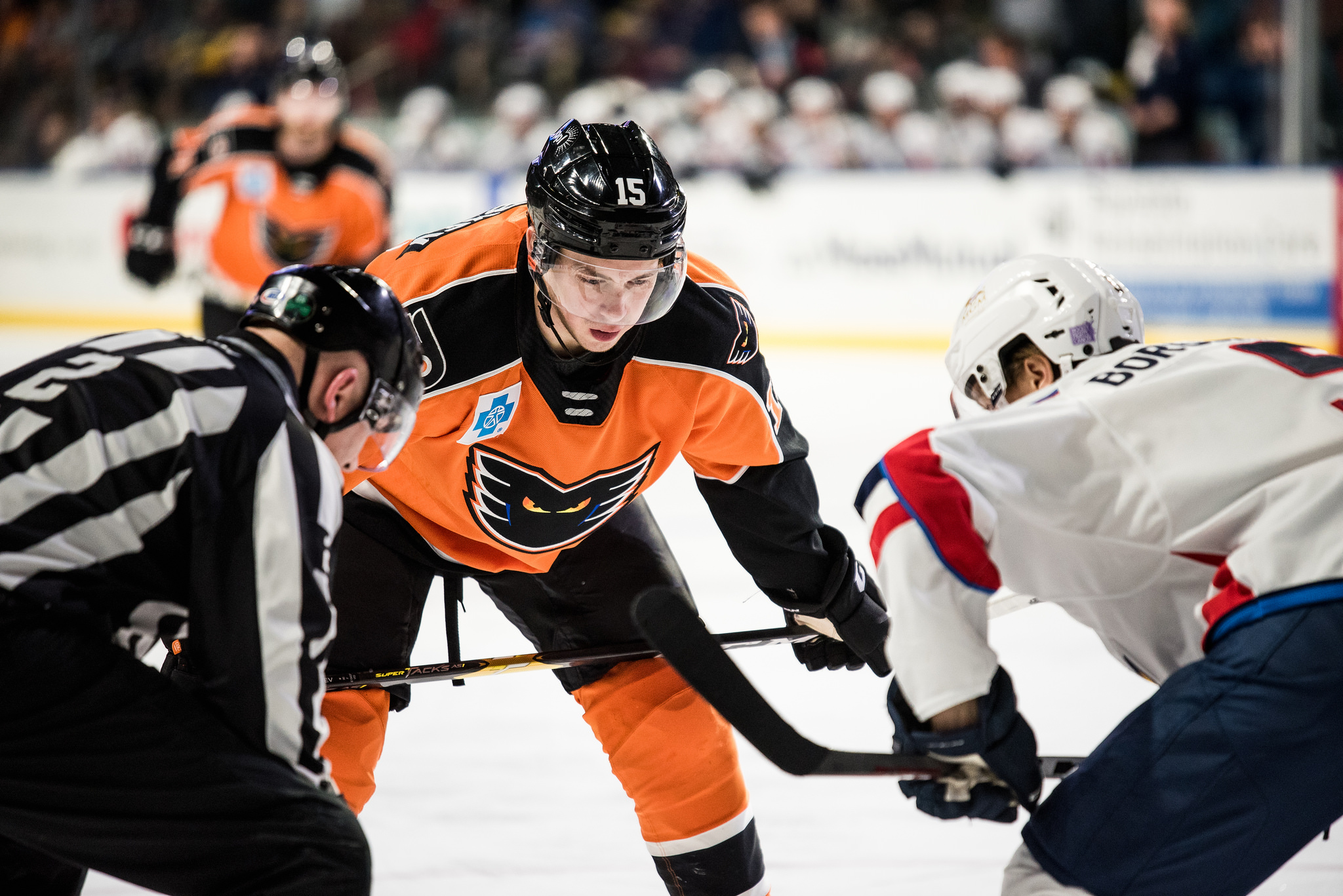 And even though that bond has helped to keep the development train on the tracks for the young Russian forwards in the Philadelphia Flyers organization, Gordon also noted that it’s in their best interest to not rely on that forever.

“You don’t want to get into situations where that becomes a crutch for them,” Gordon said, “where they can just rely on their Russian and not learn the English language, because that’s ultimately going to be important as they progress as hockey players.”

Continuing to work on his English — both with his tutor and teammates — and learning to grow into his life in the United States are the things that may have helped Vorobyev the most, both on and off the ice.

A solid rookie campaign this past season — that saw him score nine goals and tally 20 assists for 29 points in 58 games — as well as a strong training camp in September allowed Vorobyev to do something that not many young players are able to.  Steal a spot on an NHL roster.

At the start of this season, Vorobyev earned his way onto the Philadelphia Flyers’ opening-night roster and played in seven games, producing two points before he was sent to the Phantoms on October 28.

Although the start of Vorobyev’s rookie season a year ago in North America may have been rockier than that of current rookies Kase and Rubtsov, head coach Gordon said that once he improved away from the rink, he was able to take the next step on the ice.

“With Misha’s circumstances, once he had a better grasp of the style of play, which was a slow process, he was able to grasp the way we wanted to play and he was a very effective player to the point where he was one of our best players at the end of the year last year.”

While Kase has his older brother to give him some advice along the way, Vorobyev doesn’t have the luxury of having a relative playing in North America. His decision of whether or not he wanted to take the plunge of coming to America was helped by a former NHLer that he played with in the KHL.

“I had a conversation with Anton Slepyshev,” Vorobyev said thinking back. “He played for the Oilers, and I spoke to him before I signed contract. He said, ‘Just go, stop thinking, just go.’”

What would be the things that held the young Russian back from coming for a shot at the NHL? Well, that boiled down to the language barrier, but Slepyshev let him know that he was in similar company.

“Because I didn’t know language,” Vorobyev said. “I didn’t speak and I couldn’t say like, ‘Hello.’ [Slepyshev] said he didn’t speak too before he came and it’s not a big deal. You just need to try and speak, learn English and you’ll feel good. Like I feel now.”

Despite being from different towns and countries as well as speaking different languages, all of the prospects have something in common. A support network of 20-plus players in their locker room willing to help them out both on the ice, and especially, off the ice.

“It goes on all the time,” Gordon said. “With all the players, not just with the guys from [other countries]. I think that it’s one of those things where sometimes it’s kind of thankless because you don’t even know if they are understanding you at times.

“But I think with the group that we have, Misha, Ruby, David, they’re definitely onboard with everything and sometimes the process is a little bit slower, but it’s part of the learning curve.”