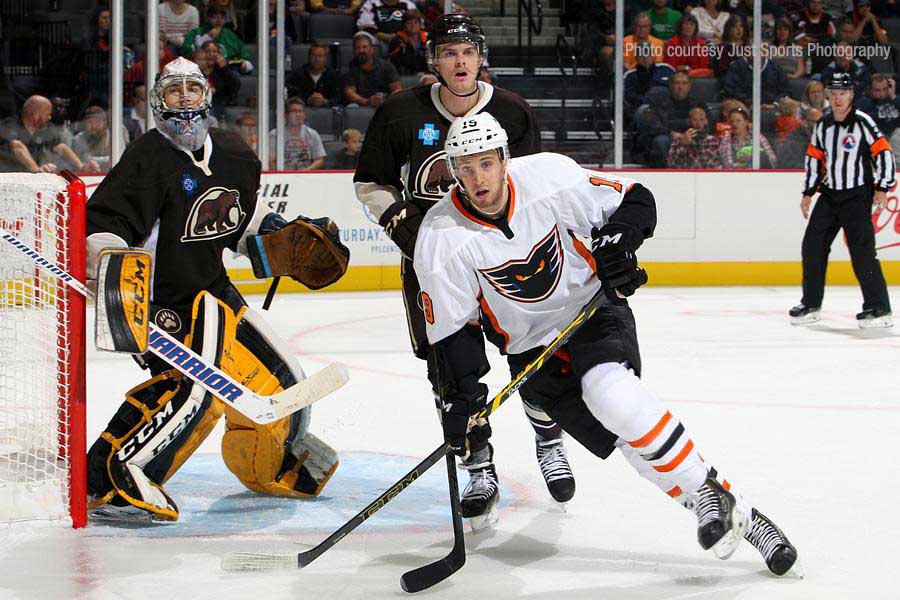 Lehigh Valley, PA – The debut preseason game for the Lehigh Valley Phantoms at PPL Center roared off to an appropriate beginning with Brett Hextall knocking home the debut goal for the team while his father, Flyers general manager Ron Hextall, watched from his booth at the top of the building. The Phantoms took the initial lead but ultimately fell to the Hershey Bears 3-1 on the historic night in downtown Allentown.

The debut preseason game for the Lehigh Valley Phantoms at PPL Center roared off to an appropriate beginning with Brett Hextall knocking home the debut goal for the team while his father, Flyers general manager Ron Hextall, watched from his booth at the top of the building. The Phantoms took the initial lead but ultimately fell to the Hershey Bears 3-1 on the historic night in downtown Allentown.

But the night wasn’t entirely about goals, hits and winners and losers. This first-ever Lehigh Valley Phantoms game marks the beginning of a new sports era in the continued revitalization of downtown Allentown. The “Battle on Hamilton” mixed-squad contest last Saturday matching Flyers and Phantoms players was the first-ever hockey played on the PPL Center ice-sheet. But this contest marks the debut appearance of the team taking the ice in their Lehigh Valley Phantoms jerseys.

“It leaves you kind of speechless how great it is,” said Phantoms co-owner and co-president Jim Brooks. “Rob (Brooks) and I have been working on this project for….oh…12 years! Ten years specifically in Lehigh Valley. So to see all the happy faces here, the boys and girls running around watching meLVin, it’s surreal for us and it’s better than we ever dreamed.”

Brett Hextall joins the Phantoms this year from the Portland Pirates, the AHL affiliate of the Arizona Coyotes, where the energetic winger had scored 27 goals over the past three seasons. The crowd erupted as they recognized it was Ron Hextall’s son who had hustled to the crease to bury the rebound of a Kevin Goumas breakaway midway through the first period giving the Phantoms a 1-0 lead at the time. Ron Hextall was shown on the video-board shortly after the close-up of Brett celebrating at the bench and the PPL Center crowd erupted.

Could the first-ever Lehigh Valley Phantoms preseason goal at PPL Center have been more perfect?

“It’s a proud father there,” Jim Brooks said. “But it’s an even more proud son. Just all the guys working really hard here. We had a great event here with the Flyers and Phantoms mixed-squad. But we came into this game still wondering if these boards are actually going to hold up to some hits! In jest of course. But now it’s great to see passion and I think our team this year is going to be made of passion. We’ve got some great guys that come to work everyday.”

In their comeback efforts, Hershey would make the most of its chances while holding off a near-constant Phantoms power-play attack. The Bears rallied against 20-year-old rookie goalie Anthony Stolarz beginning when Joel Broda scored shorthanded in the second period. Stan Galiev broke the tie midway through the third using a fantastic spin-o-rama move around a Phantoms defenseman to open his top-shelf blast from between the circles. Braden Pimm capped the scoring a couple minutes later for the 3-1 final.

Bears rookie goaltender Pheonix Copley was the star of the game for Hershey with 23 saves on 24 shots while helping the Bears’ penalty-kill limit Lehigh Valley’s power play to an 0-for-8 mark.

The Phantoms had some close-range opportunities including a pair of breakaways by Nick Cousins and a perfect point-blank chance for Darroll Powe but Copley made some impressive saves to keep the Lehigh Valley offense in check.

The Lehigh Valley Phantoms return to action night with a road preseason tilt in Hershey. The Phantoms then return to PPL Center to face off against the Albany Devils in their preseason finale.

Check it out! Don’t miss the action and fun of Lehigh Valley Phantoms hockey at PPL Center in downtown Allentown! Contact the Phantoms Front Office for information on season tickets and affordable partial-season plans by calling 610-224-GOAL (4625)