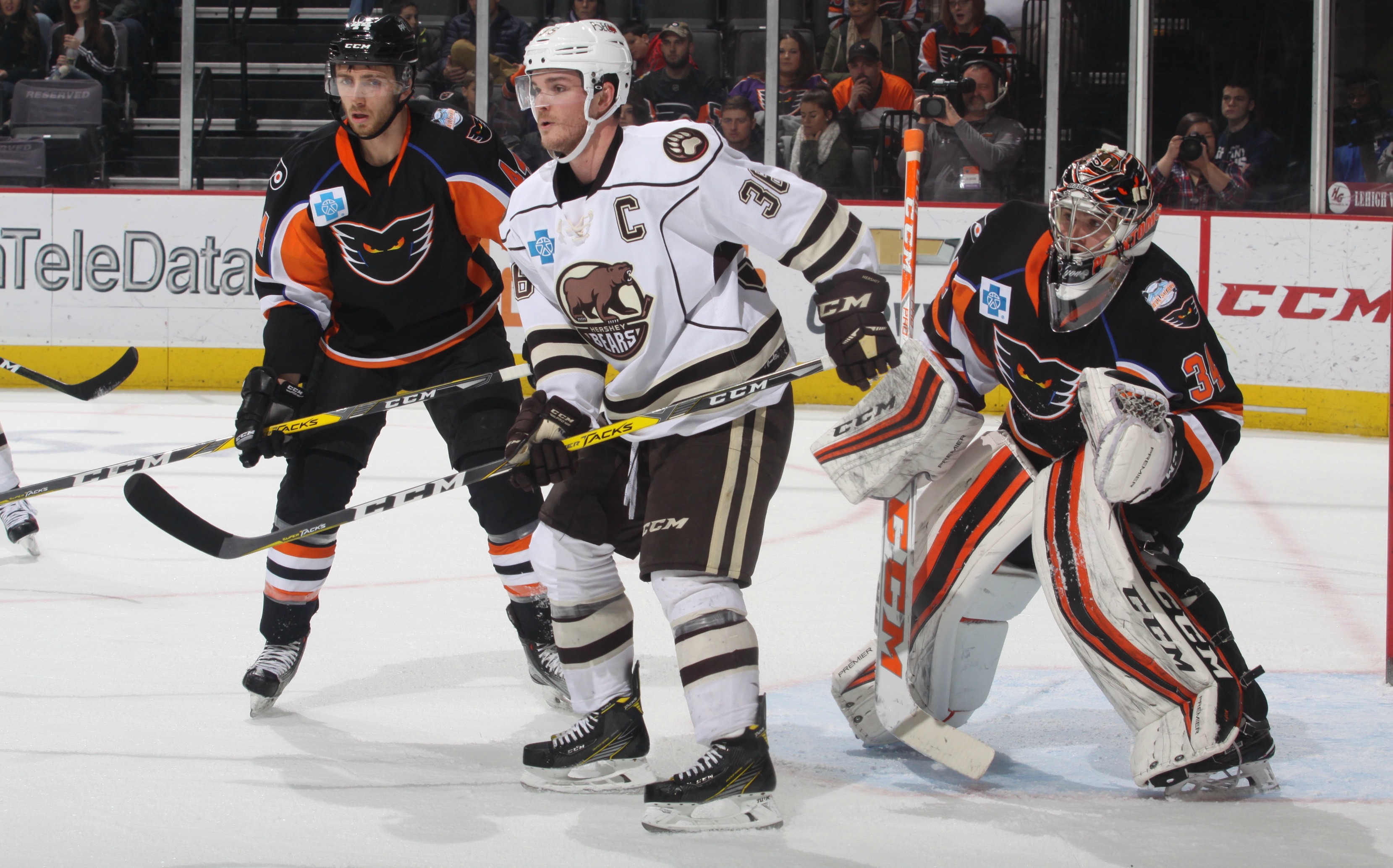 Lehigh Valley, PA – The 50th Phantoms sellout all-time in less than three seasons at PPL Center was ready for hockey’s return on the other side of the Holiday Break but so were the Hershey Bears who avenged a pair of recent December setbacks to their in-state rivals in the form of a 5-2 decision on Monday night.

It was the largest Phantoms crowd of the season at an even 8,800 fans who were energized and excited at the corner of Seventh and Hamilton in Center City Allentown. And things looked promising for the hosts right from the start with a 1-0 lead on the 13th goal of the season from Colin McDonald. But for the first time in 13 such opportunities, the Phantoms were not able to capitalize on a first-intermission advantage for a victory. Andy Miele also registered a key conversion for the hosts with his third of the year. But Hershey was successful in evening the season rivalry series at three games apiece on the strength of goals from Chris Bourque (8th), Travis Boyd (10th), Paul Carey (9th), Christian Thomas (13th) and Zach Sill (6th).

The Phantoms had a perfect 6-0 homestand within their sights but had to settle for a still very impressive 5-1-0 mark in their longest stretch of PPL Center engagements in the 2016-17 campaign. Lehigh Valley at 20-8-1 maintains a one-point advantage over the Hershey Bears (17-6-6) in the ultra-competitive Atlantic Division standings.

After a denial by goalie Vitek Vanecek, Phantoms captain Colin McDonald roared right back with a one timer in the slot that he placed perfectly to the upper-right corner for his 13th of the season. The power-play strike came with some board battles and quick puck movement by Danick Martel and Travis Sanheim who were credited with helpers on the play. 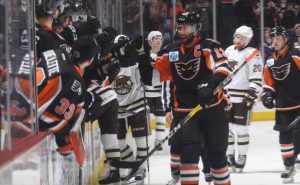 McDonald came dangerously close to tacking on another just a couple minutes later when Cole Bardreau’s quick pickoff in the neutral zone resulted in a breakaway but Vanecek appeared to barely get a right skate on the close-range offering as McDonald shortly thereafter went crashing out into the corner.

The Phantoms showed hardly any signs of rustiness after the Holiday Break layoff and carried the bulk of the play in the opening frame. Lehigh Valley previously held a record of 12-0 in games in which the team had a lead after 20 minutes but for the first time this season there would be a blemish on that mark as the Bears were on the verge of a big surge in the middle frame.

A carry-over power play to begin the second provided the early momentum for the Chocolate and White and they would go on to score back-to-back goals less than a minute apart to turn their deficit into a one-goal advantage. Chris Bourque scored from the right circle on the rush as the Bears quickly guided the puck across from left to right while in transition. With his 499th career point as a member of the Bears, Hershey had evened the count at 1-1 at 4:22 into the second period.

A power-play opportunity would allow Travis Boyd to achieve double figures in goals this season with his one-timer from the left dot at 5:15 smartly set up by a nifty fake-slapper at center-point by Christian Djoos.

Paul Carey’s ninth of the season at 17:09 came on a waist-high deflection of a center-point drive by veteran defenseman Aaron Ness. Carey extended his point streak to 19 games which is the longest in the American Hockey League since 2008-09.

The Phantoms surged right back just 23 seconds later with Reece Willcox flying up the right boards and carrying behind the Hershey net before leaving a perfect give on the doorstep for the awaiting Andy Miele for the chip-shot. Nic Aube-Kubel also assisted on the goal at 17:32 and the Phantoms trailed at the second intermission 3-2.

Lehigh Valley was not without other quality opportunities in the second period despite the increased pressure of the Hershey attack. A nifty poke-check at center by the fast hands of Samuel Morin sent the hulking blueliner in all alone on a breakaway but his bid was turned aside by the left pad of Vanecek. 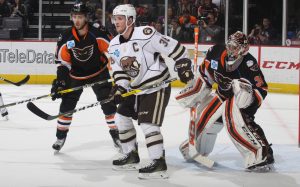 The Phantoms enjoyed a carry-over power play to open the third and then were granted another man advantage when Chris Bourque was assessed his second consecutive penalty but the Bears penalty kill was successful at clogging the shooting lanes in their efforts to inhibit the Phantoms’ opportunities.

A costly turnover from the Phantoms end led to a Zack Sill pickoff. Ryan Bourque’s shot from the left circle hit off the hands of Christian Thomas in the slot and deflected in past the waving glove of Alex Lyon for a key goal at 5:37 into the third period and a 4-2 Hershey lead.

Sill would close the scoring with six minutes remaining when Thomas wheeled behind the goal and connected with the veteran at the top of the left circle whose powerful one-timer beat Alex Lyon on the blocker side.

The feisty game finished with a handful of skirmishes after the final result had officially been registered. Various players gathered behind the Lehigh Valley goal and then again met around center ice as both sides displayed their mutual animosity for each other after the two strong squads had squared off four times in the month of December alone. 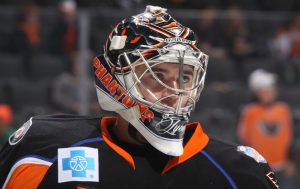 Hershey out shot the Phantoms 30-25. It was the first time the opposition has won the shot count in the last eight games and also represented Lehigh Valley’s lowest shot total in a little over a month.

The Bears were 1-for-4 on the power play while Lehigh Valley finished at 1-for-5.

The Phantoms hit the road for their remaining games of calendar year 2016 with their culminating sojourn to western New York. Lehigh Valley faces off against the Rochester Americans on Wednesday and Friday evenings.

The Phantoms return to PPL Center on Saturday, January 7th at 7:05 against the Albany Devils and also have a home game on Sunday, January 8th at 5:05 against the Utica Comets on Star Wars Night. Lehigh Valley’s next rivalry encounter against the Hershey Bears takes place on January 13th at PPL Center. Tickets for upcoming Phantoms home games are available at PPLCenter.com