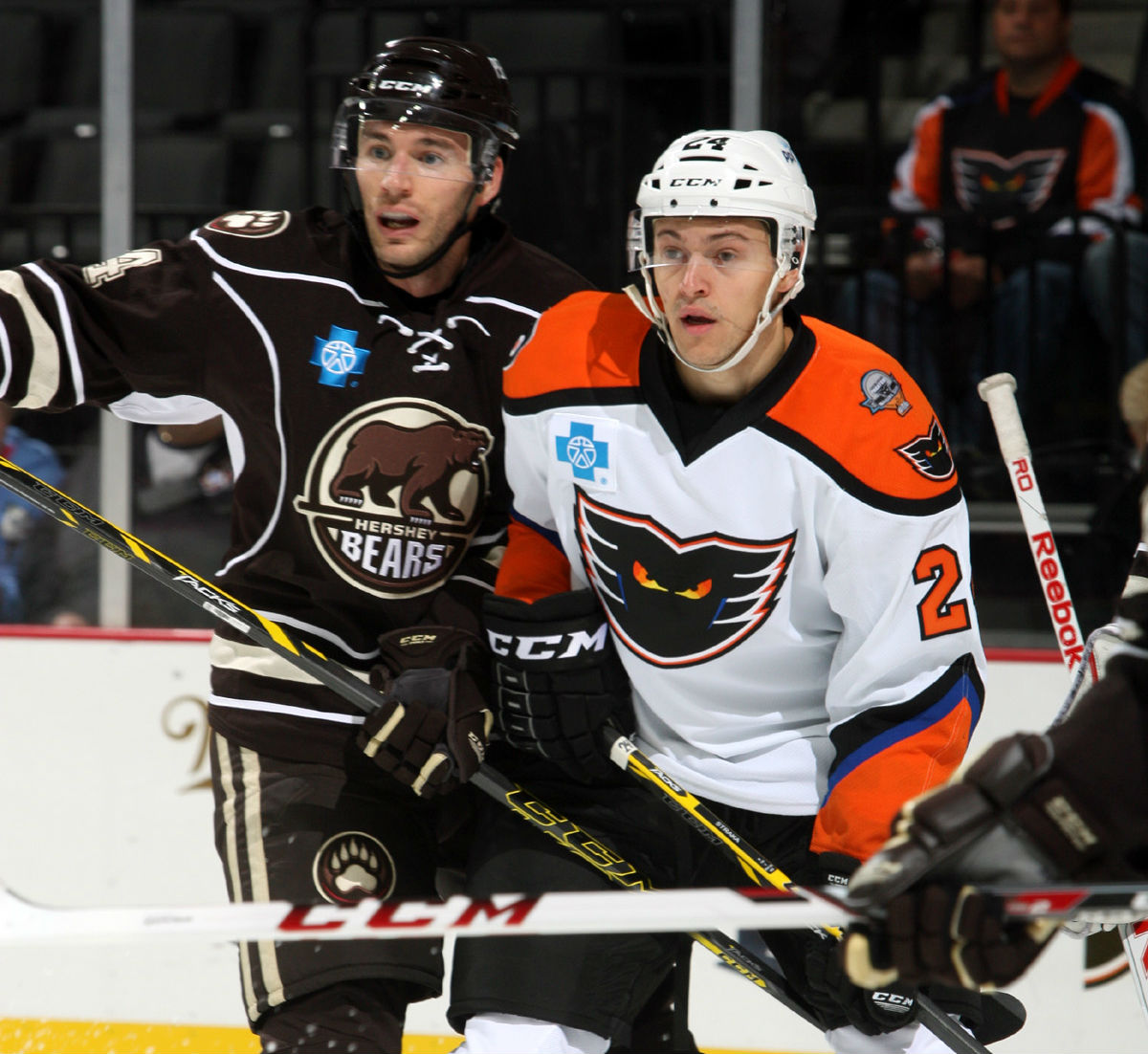 Hershey, PA – Trailing 3-2 in the third period, Brandon Manning’s powerful slapshot with about 15 minutes remaining clanged hard off the iron and away in a key moment that allowed host Hershey to hold off Lehigh Valley’s comeback efforts in what was eventually a 5-2 decision.

Andrew Gordon scored against his former team for his 12th of the season and Oliver Lauridsen tallied his second of the year for the Phantoms scoring. Gordon has scored four goals in his last five games and tallied yet another one at Giant Center where he was immensely popular as a star player who scored 102 goals in a four-year stretch in ChocolateTown.

Hershey captain Dane Byers led the Bears’ attack with a pair of goals and Pheonix Copley was able to hang on for the victory over Anthony Stolarz in the battle of talented rookie goaltenders.

Lehigh Valley and Hershey are even in their season rivalry-series at three games apiece and both teams are unscathed at home against each other. This contest was the opener of a home-and-home series this week between the East Division foes with a rematch upcoming on Wednesday night at PPL Center in Allentown.

The game also marked the midway point of the season for the Phantoms who have played the first 38 games of their 76-game regular season schedule and hit the half-mark with a record of 19-14-5.

The Phantoms found themselves in a 3-1 hole in the opening period and were facing 5-on-3 penalty kill to open the second frame but goaltender Anthony Stolarz bounced back from the opening to turn in some terrific saves thus keeping his team in the game. Lauridsen’s goal seven minutes into the second frame came shortly after another one of Stolarz’s impressive stops.

Hershey’s penalty kill was a big difference-maker in the contest. One of the top kills in the league successfully held the Phantoms to 0-for-8 on the man advantage. Among other tough breaks in the game, the Phantoms had two powerful blasts that rang hard off posts and also had another one that barely deflected away and appeared to graze iron as well.

Veteran TIm Kennedy opened the scoring just over five minutes into the game with an unassisted breakaway tally past the right leg of Stolarz for his third of the year. The interception and rush up ice came at the very end of a Phantoms power play but the goal itself was not technically considered shorthanded in the statistics as Jim O’Brien for Hershey had just returned from the penalty box as Kennedy was converting.

Less than two minutes later Andrew Gordon would be denied on a breakaway by Copley but the Bears efforts to clear the zone inadvertently resulted in another opportunity for Gordon in the slot who successfully blasted his second chance through Copley to even the score at 1-1.

Former Phantom and Flyer Kris Newbury rifled a pass from the right-wing corner to the crease which bounced off Byers and into the goal for a 2-1 lead and then Zack Stortini was called for an unsportsmanlike conduct penalty after taking exception to Newbury’s goal celebration in his vicinity. The Bears tallied on the ensuing power-play on a nice drag through the slot by Chris Brown who registered his 11th sliding the puck past the left skate of Stolarz.

Somehow Stolarz kept the Phantoms within a couple throughout a lengthy and dangerous 5-on-3 to open the second period as the rookie goalie nicely bounced back from the opening frame to provide his Phantoms an opportunity to make a comeback.

Lauridsen scored his second goal in his last four games with a wrister from the high slot after accepting a pass from the right-wing boards by Kevin Goumas. Former Hershey Bear Brett Flemming started the rush up ice and received the secondary assist on the play.

The Phantoms had the momentum and were now generating the better chances on goal but were unable to find the equalizer in their third game of the weekend. Manning’s iron-shot on the power play was followed in short order by an Andrew Gordon drive in the slot that appeared to barely glance off the shoulder of Copley and then graze the post as well. Defenseman Adam Comrie also struck the post back in the second period with a powerful blast of his own.

Dustin Gazley picked off a puck behind the Phantoms goal with under four minutes remaining and Byers blasted home his second of the game to give the Bears valuable breathing room.

Lehigh Valley was awarded a late power play with 2:30 to go and pulled Stolarz for a 6-on-4 attack but were still unable to beat Copley. Dustin Gazley raced down the right-wing with time running out and scored into the empty-net from a sharp angle with 10 seconds remaining for the 5-2 final score.

The Phantoms are in the midst of a stretch of six games in nine days with games upcoming on Wednesday at home vs. Hershey, on the road at Syracuse on Friday, and then back at home on Saturday against St. John’s.

Tickets are currently available for Lehigh Valley’s next home game which comes this Wednesday, January 21st when the Phantoms welcome the rival Bears to PPL Center for a rematch. Tickets can be purchased at the Mealey’s Furniture Box Office at PPL Center (701 Hamilton), by calling 610-347-TIXX (8499) or by logging on pplcenter.com.