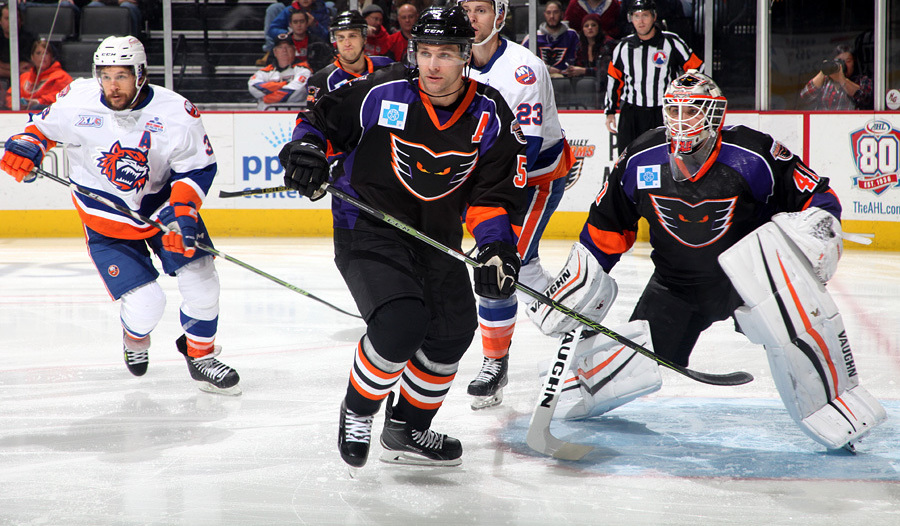 Lehigh Valley, PA – Robert Hagg scored his first goal of the season and Anthony Stolarz registered 27 saves Saturday evening but the Bridgeport Sound Tigers were able to hang on for a 2-1 victory over the Lehigh Valley Phantoms in front of 8,886 fans at PPL Center. The standing room-only crowd marked the sixth sellout of the season for the Phantoms and the team’s 28th regular season sellout since opening the doors of PPL Center last Fall. 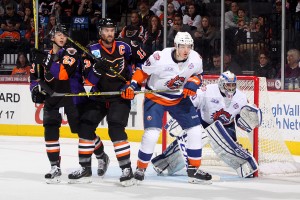 Saturday’s game was another “20 Years of Phantoms” nights as the team continues to celebrate the 20th Anniversary Season of Phantoms hockey. As part of the celebration, Phantoms players donned specialty throwback jerseys reminiscent of those worn by the Philadelphia Phantoms and such former Phantoms and current NHL stars as Claude Giroux, Jeff Carter and Patrick Sharp. In addition, the first 3,000 fans in attendance Saturday evening received the second of four commemorative poster giveaways in celebration of the team’s 20th Anniversary Season.

Saturday’s game marked the first of six total meetings during the 2015-2016 regular season between Lehigh Valley and Bridgeport and was the Phantoms’ sixth contest in downtown Allentown over the team’s last seven games overall.

Despite the setback, Stolarz turned in another sensational performance between the pipes. The second-year netminder denied 27 of Bridgeport’s 29 total shots in the game and has now registered 11 games with 27 or more saves this season. 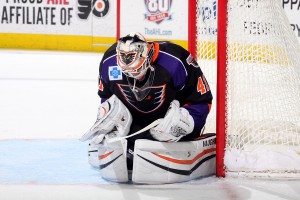 Meanwhile, Hagg provided the offense for the Phantoms with a power play conversion from Aaron Palushaj and Samuel Morin. Hagg’s man-advantage marker was the lone power play tally in a game that featured 15 combined power play opportunities. Lehigh Valley’s penalty kill was razor sharp in denying each of the Sound Tigers’ six man-advantage chances while the Phantoms produced one power play marker in nine opportunities. Lehigh Valley’s penalty kill has now allowed just one power play goal over the team’s last five games going an impressive 19-for-20 during that stretch.

Taylor Beck and Joe Whitney provided the offense for Bridgeport while Christopher Gibson earned the win in goal for the Sound Tigers with 21 saves.

Bridgeport opened the scoring just over five minutes into the contest when, fresh off a two-minute hooking infraction, Beck pounced out of the penalty box before gathering a pass on the left wing en route to snapping home his eighth goal of the season. Bracken Kearns and Jared Gomes assisted on the even-strength strike netted 5:24 into the first period.

The Phantoms nearly leveled the contest a little over five minutes into the second frame when, after a two-minute minor for boarding, Mark Alt came roaring out of the penalty box before kick starting a right wing rush only to see his sizzling snap shot rattle off the right post.

The Sound Tigers doubled their lead in the final minute of the second stanza when Sebastian Collberg broke in on a two-on-one alongside Whitney before feeding a cross-ice dish resulting in Whitney’s team-leading 12th goal of the year. Collberg garnered the only assist on the five-on-five conversion scored 19:21 into the second period.

The Phantoms sliced Bridgeport’s lead in half and brought the capacity crowd at PPL Center to its feet with six and a half minutes left in regulation when Hagg snapped in his first goal of the season with a wrist shot from the high slot. Palushaj and Morin assisted on the power play tally scored 13:30 into the third period. The goal came amid Lehigh Valley’s ninth power play opportunity of the game, the second most power play chances the Phantoms have enjoyed in a game this season.

The Phantoms are back in action on Sunday when Lehigh Valley invades the Mohegan Sun Arena in Wilkes-Barre/Scranton for a 4:05 p.m. clash with the Penguins. Catch all the action on WAEB 790-AM, online at 790waeb.com or via the iHeartRadio app. Coverage begins with “Countdown to Faceoff” at 3:25 p.m. Sunday’s game kicks off a five-game road swing for the Phantoms which will see Lehigh Valley travel to Wilkes-Barre/Scranton, Binghamton, Hershey and Portland before returning to downtown Allentown.

The Phantoms are then back at PPL Center on Friday, January 8 when they welcome the Penguins back to downtown Allentown for a 7:05 p.m. showdown. Tickets for Friday’s game, along with each of the Phantoms’ 21 remaining home games, are currently available by logging on to pplcenter.com, by calling 610-347-TIXX [8499] or by visiting the Mealey’s Furniture Box Office at PPL Center [701 Hamilton Street].