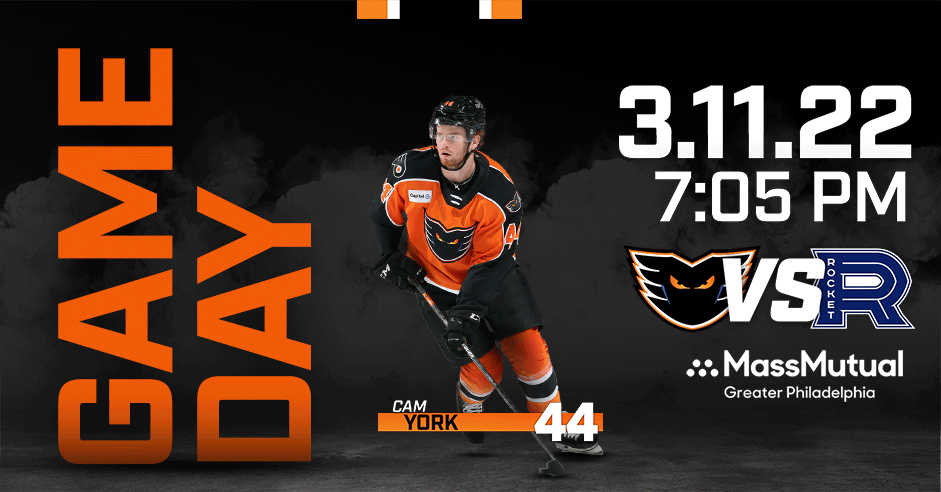 TONIGHT
It’s a GAMEDAY at PPL Center, presented by MassMutual, as the Lehigh Valley Phantoms host the Laval Rocket, AHL affiliate of the Montreal Canadiens.
Lehigh Valley (18-24-10) is facing Laval for the first time this season and will return the favor just of Montreal in two weeks.

LAST TIME
Felix Sandstrom kept the Phantoms close but eventually the Hershey Bears struck for three goals in the third period in a 4-0 win. Zach Fucale recorded a 26-save shutout to avenge some recent losses at PPL Center. The game was 0-0 at the midway mark before Beck Malenstyn’s deflection goal broke the deadlock and began a two-goal and three-point night. It was just the second regulation win for Hershey against Lehigh Valley in eight games of the season rivalry series.

WADE RETURNS
High-energy winger Wade Allison has been activated from injured reserve in Philadelphia and loaned to the Lehigh Valley Phantoms and is expected to return to the Phantoms’ lienup this weekend. The second-rounder out of Western Michigan University has played just seven games with the Phantoms and one game with the Flyers in a season with limited action due to three different injuries. His most recent game was January 22 for the Philadelphia Flyers at Buffalo. Allison has three goals and one assist in his seven games with the Phantoms that al came in December and January.

LAVAL ROCKET
Laval (25-19-3), AHL affiliate of the Montreal Canadiens, rates third in the North Division. Popular Phantoms’ alum Danick Martel has scored nine goals with nine assists. Martel played in 199 with the Phantoms from 2015-18 scoring 68 goals which rates third all-time in Lehigh Valley history and was the most for any Lehigh Valley player at the time he was claimed off waivers by Tampa Bay.

Goalie Cayden Primeau, son of former Flyers’ captain Keith Primeau, is 11-9-1, 2.80, .912 with the Rocket and has also played in 11 NHL games this season with Montreal going 1-7-1, 4.88, .866. The former Northeastern University standout grew up in Voorhees, NJ where he played for Bishop Eustace Prep and the Philadelphia Revolution. Primeau has recently been recalled to Montreal again.

News and Notes
– Cal O’Reilly has played in 993 professional games including the AHL, NHL and KHL. He is projected to reach his 1,000th pro game on March 25 at Laval. On March 4, he became the 41st player to reach 800 AHL games.
– The Phantoms have played 52 games and have 23 remaining with less than two months to go in the 2021-22 regular season.
– Matt Strome has three goals in his last three games. All five of his goals this season have come since January 23. Strome missed Tuesday’s game at Hershey due to injury.
– Hayden Hodgson leads the Phantoms with 16 goals and has four goals in the last seven games as well as 10 goals in the last 18 games. Hodgson is returning to the lineup following a three-game suspension.