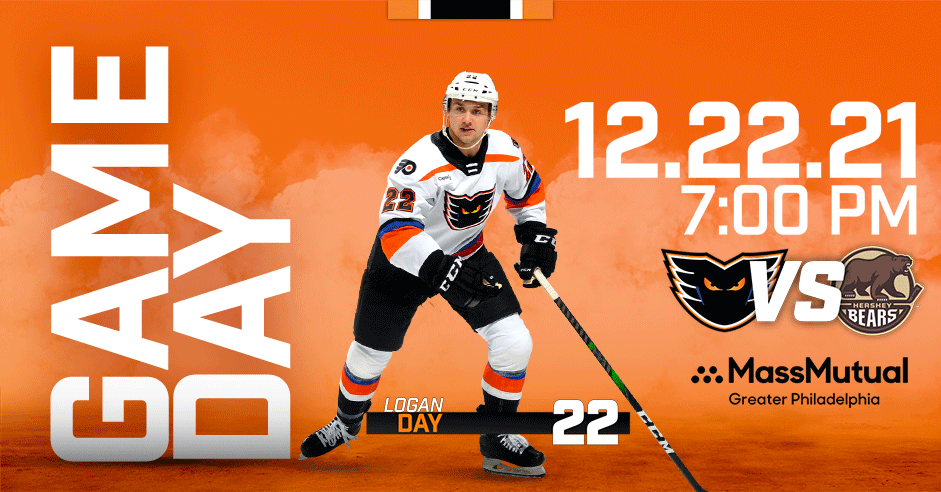 TONIGHT: It’s the last Phantoms GAMEDAY before the Holiday Break. The Lehigh Valley Phantoms trek to Chocolatetown to take on the rival Hershey Bears. The Phantoms enter tonight on a five-game point streak (4-0-1) and are 2-1-0 against the Bears this season including 1-1-0 at Giant Center. This is the second game of a home-and-home series between the two teams. This is Game 4 out of 14 in the season rivalry series.

LAST TIME: Connor Bunnaman extended his goal-streak to three games and Pat Nagle was terrific in a 29-save masterpiece as part of a 2-1 win over Hershey on Tuesday night at PPL Center. Charlie Gerard opened the scoring in the first period with his first goal as a Phantom. Nagle was barely more than three minutes away from his first ever AHL shutout before Ryan Dmowski broke up his blank sheet with just 3:07 left. Hershey put the puck in the net just a half-second after the game ended and the horn had sounded on what WOULD have been the tying goal.

WELCOME BACK: Gerry Mayhew was recalled to the Flyers on Tuesday morning and participated in Philadelphia’s Morning Skate ahead of that night’s game against the Washington Capitals. But Lehigh Valley’s leading scorer was back with the Phantoms later that afternoon after the Philly vs. Washington game was called off and postponed due to COVID protocols affecting the Caps.  It was to be Mayhew’s first game with the Flyers.
Jackson Cates also was returned to the Phantoms ahead of the Tuesday night contest just five days after scoring his first career NHL goal last Thursday at Montreal.

HERSHEY: The Bears are 12-9-3 and have now lost two straight after a three-game win streak that culminated with an 8-3 blowout of the Wilkes-Barre/Scranton Penguins on Saturday. The Bears were missing several key players from the lineup yesterday including Phantoms’ alum Mike Vecchione, Axel Jonsson-Fjallby and Cody Franson as well as goalie Zach Fucale. The Bears have added some tryout players to fill out their roster, Joe Snively and Brett Leasson returned to the Bears in time for Tuesday’s contest after the Capitals game against the Flyers was postponed earlier in the day.

NOTEABLES:
– Gerry Mayhew’s assist in Tuesday’s game on Connor Bunnaman’s goal puts Mayhew into sole possession of the team in points with 16 passing Morgan Frost. Mayhew’s nine goals also leads the Phantoms.
– Pat Nagle has served as goalie in each contest of the five-game point streak for the Phantom sincluding three starts and two relief appearances. Nagle is 4-0-2 with the Phantoms.
– Connor Bunnaman is on a three-game goal streak. That’s tied with Max Willman for the longest such streak on the Phantoms this season.
–  Cal O’Reilly has a three-game assist streak and also has points in six of the last seven games.
– Maksim Sushko has three goals in the last five games and is also on a three-game points streak (2-1-3).

UP NEXT: The Phantoms will be off for the Holiday Break after tonight’s game. They return to PPL Center next Wednesday, December 29 to take on the Cleveland Monsters. The Phantoms are also at home on Saturday, January 1 at 6:05 p.m. against the Bridgeport Islanders.