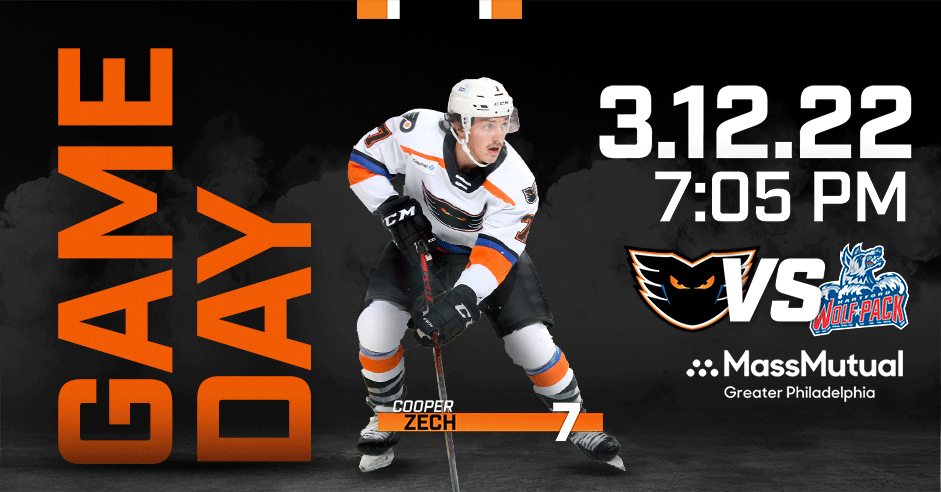 TONIGHT
It’s a GAMEDAY at PPL Center, presented by MassMutual, as the Lehigh Valley Phantoms host the Hartford Wolf Pack, AHL affiliate of the New York Rangers
Lehigh Valley (19-24-10) is 3-2-0 against Hartford entering the final game of the season series. Tonight is the last home game in the month of March.

LAST TIME
Wade Allison powered a comebck victory over the Laval Rocket with a goal and two assists in a 4-3 win on Friday night at PPL Center. The Phantoms trailed 3-1 late in the second period but scoed the next three straight for the W. Allison’s power-play goal early in the third period broke a 3-3 tie. Max Willman had tied it just two minutes earlier. Logan Day (3rd) and Cal O’Reilly (14th) also tallied for the Phantoms in the exciting win. O’Reilly going Allison in the three-point club in the contest.

WADE RETURNS
High-energy winger Wade Allison was activated from injured reserve in Philadelphia and loaned to the Lehigh Valley Phantoms where he made his return to the lineup on Friday. Allison now has a four-game goal streak with the Phantoms that dates back to January. Allison’s goals in his last four Lehigh Valley contests were on Jan 14, Jan 15, Jan 16 and Mar 11.
The second-rounder out of Western Michigan University has played just seven games with the Phantoms and one game with the Flyers in a season with limited action due to three different injuries. His most recent game was January 22 for the Philadelphia Flyers at Buffalo. Allison has four goals and one assist in his right games with the Phantoms.

HARTFORD WOLF PACK
Hartford (27-16-7) enters the week with a three-game point streak and is hanging on to third-place in the Atlantic Division. Head coach Kris Knoblauch was previously an assistant coach on the Flyers along with current Phantoms’ head coach Ian Laperriere. Lehigh Valley is 3-2-0 against Hartford this season including a 26-save shutout for Pat Nagle at XL Center on January 29. But the Wolf Pack won the most recent matchup in a wild 6-4 contest on February 5 at PPL Center with Hartford overcoming an early 2-0 deficit via a five-goal outburst in the second period. Captain and leading scorer Jonny Brodzinski (18-21-39) is currently up with the New York Rangers. Rookie Austin Rueschoff’s 13 goals is tops among active Pack players. Veteran goalie Keith Kinkaid is 18-5-2, 2.63, .913

News and Notes
– The Phantoms showed a very different look in their lineup on Friday night compared with their last game on Tuesday at Hershey. Entering the lineup Friday were Wade Allison, Max Willman, Hayden Hodgson, Matt Strome and Egor Zamula. Allison was playing his first game since January. Willman had returned to the Phantoms from the Flyers. Hodgson was coming back from a three-game suspension. Strome and Zamula both missed one game due to injury before returning on Friday.
– Hard-shooting Wade Allison is on a four-game goal streak with lamplights in his most recent four games dating back to January. Allison’s goals came on January 14, January 15, January 16 and March 11.
– Cal O’Reilly has played in 994 professional games including the AHL, NHL and KHL. He is projected to reach his 1,000th pro game on March 25 at Laval. On March 4, he became the 41st player to reach 800 AHL games.
– The Phantoms have played 53 games and have 23 remaining with less than two months to go in the 2021-22 regular season.
– Matt Strome has three goals in his last four games and returned to the lineup on Friday after sitting out for one game last Tuesday due to injury. All five of his goals this season have come since January 23. Strome missed Tuesday’s game at Hershey due to injury.
– Hayden Hodgson leads the Phantoms with 16 goals and has four goals in the last eight games as well as 10 goals in the last 19 games.