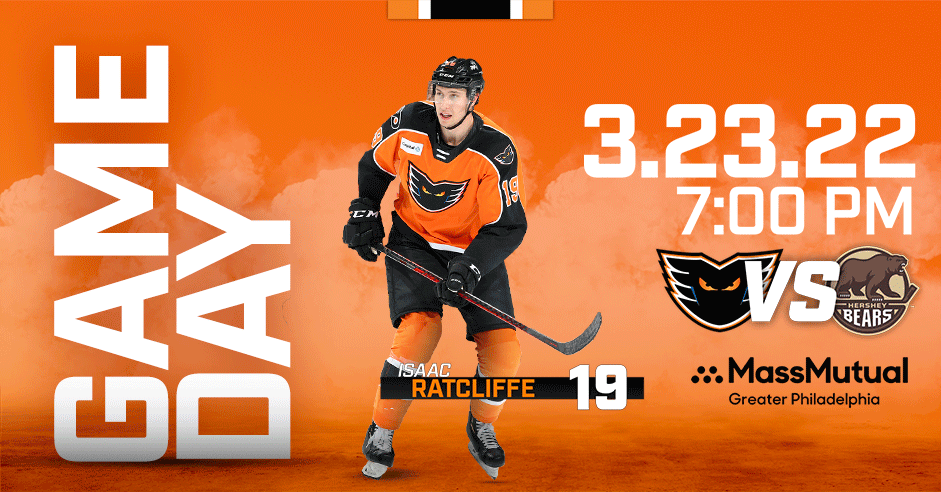 TONIGHT
It’s a GAMEDAY presented by MassMutual with the Lehigh Valley Phantoms traveling to Chocolatetown to take on the Hershey Bears!
Lehigh Valley (22-25-10) is playing Game 4 of a six-game road swing. This is Game 58 of the season and there are 19 remaining including tonight.
Hershey (29-23-8) dropped three straight on its recent Canadian road-trip. The Phantoms are 5-3-1 against Hershey. Tonight is Game 10 out of 14 in the rivalry series.
Tonight is Cal O’Reilly’s 999th pro game.

LAST TIME
Lehigh Valley racked up seven goals for the first time this season including two apiece from Cal O’Reilly and Wade Allison. Egor Zamula had three assists while Tanner Laczynski scored for a second consecutive night. Isaac Ratcliffe and Charlie Gerard also found the back of the net. Allison added two assists for the first four-point performance of the season for the Phantoms.

HERSHEY BEARS
Lehigh Valley has lost their most recent two visits to Giant Center without scoring a goal in 4-0 and 2-0 shutout losses dealt by Zach Fucale. The Phantoms still have the edge in the series with a 5-3-1 record against the Bears. Hershey (29-23-8) dropped three straight last week with just a single overtime-loss standings point at Belleville in a rough road-trip through Canada that concluded with a 5-1 loss at Laval on Wednesday. Phantoms’ alum Mike Vecchione is the team’s active leading scorer with 12-24-36. He recently returned from the Washington Capitals where he played in his first NHL game since signing with the Flyers and playing 2 games for Philadelphia in 2017-18.

PHANTASTIC!
– Cal O’Reilly is currently at 998 pro games (AHL, NHL, KHL combined) and is projected to play in his 1,000th pro game on Friday, March 25 at Laval. Earlier this month, he became the 41st player to reach 800 AHL games.
– Cal O’Reilly has 18 goals this season to equal a personal high. The 35-year-old captain of the Phantoms also had 18 goals in a season 15 years ago in the 2006-07 season when he was a 20-year-old rookie with the Milwaukee Admirals. Cal has five goals in his last five games including a pair of two-goal games. Cal rates 30th all-time in AHL scoring with 675 points. He is 9th all-time in assists with 527.
– Wade Allison is on a six-game point streak from January 14 through March 19. He also had an unusual 4-game goal streak from January through March that included an almost two-month hiatus due to injury. He has goals in five of his last six games with Lehigh Valley including a four-point performance on Saturday at Springfield which is the most for any Phantom in a game this season.
– The Phantoms trail Wilkes-Barre/Scranton by six points for the last playoff spot in the Atlantic Division and Lehigh Valley also has one game in hand. The Phantoms and Penguins have three games against each other in April including in the season finale on April 30 at PPL Center. The top 6 teams in the Atlantic Division qualify for the playoffs.