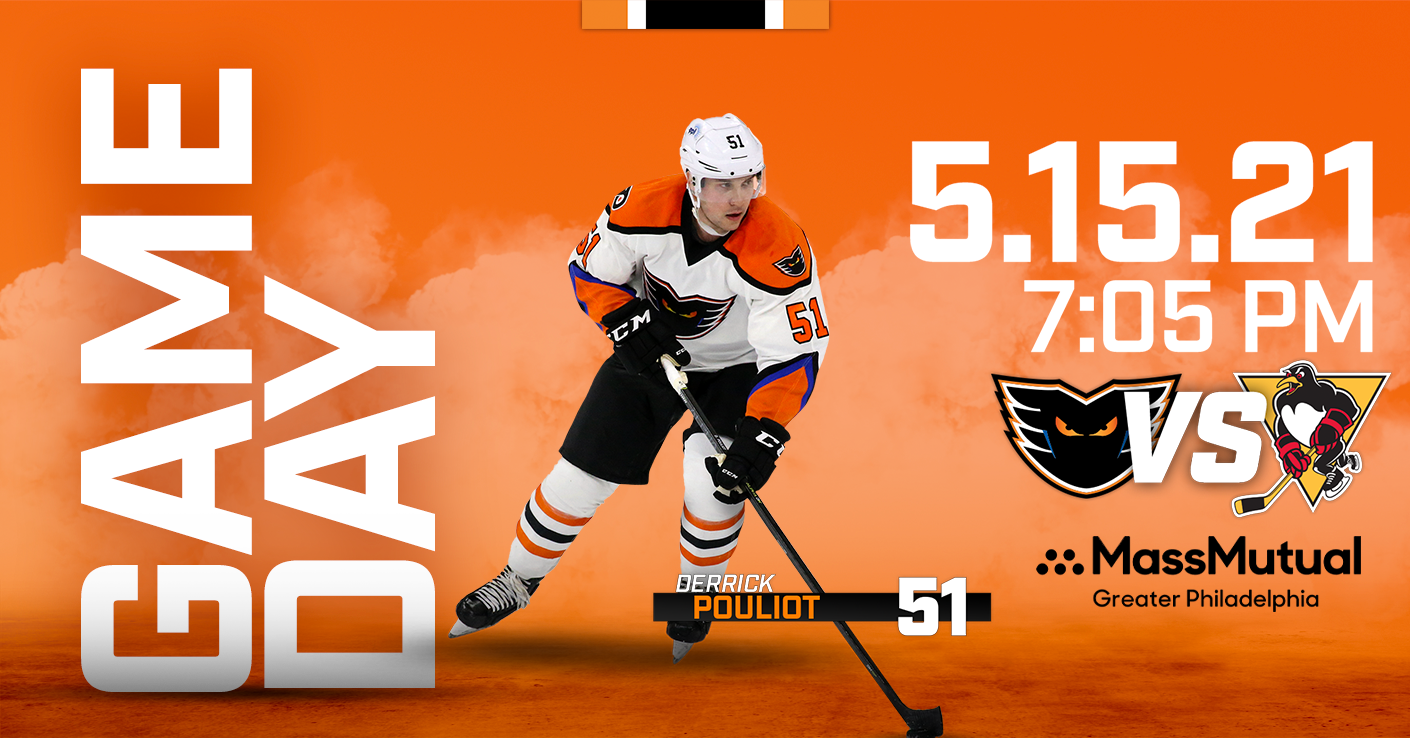 Last Time Out – The Phantoms won at “The Rock” in a 2-1 decision over the Binghamton Devils at Prudential Center in Newark. It was the first-ever game in an NHL arena for Lehigh Valley and the first appearance for the franchise since the Adirondack Phantoms played the Bridgeport Sound Tigers in Philadelphia in 2014. David Kase broke a scoreless deadlock late in the second period. And Chris Mueller’s power play goal with 7:45 remaining in the third period held up as the game-winner. Felix Sandstrom had a 27-save game seeing 28 shots in his fifth consecutive strong performance.

Last Time at Home – Brennan Saulnier scored three goals in the first 9:55 of the game and the Phantoms breezed from there to a comfortable 6-2 win over the Wilkes-Barre/Scranton Penguins on Mothers’ Day at PPL Center. Chris Mueller scored twice in his 800th AHL game and Tanner MacMaster had a goal and an assist while Zayde Wisdom contributed three primary assists and recorded a +4 rating. It was the largest margin of victory for the Phantoms this season. Saulnier had only one goal in 11 games played this season before his first-period explosion on Sunday afternoon. He capped the day with a fight against Jordy Bellerive with 49.7 seconds left and flexed and waved his arms to the crowd on his way off.

Historic Hatty! – Brennan Saulnier’s hat trick just 9:55 into the game is the fastest in the 25-year history of the Phantoms’ franchise. It was the first “Natural” hat trick in Lehigh Valley history and was just the sixth time a Phantoms player had scored three goals in a single period. The last Phantom to score three goals in a period was Pete Zingoni in 2006 for the Philadelphia Phantoms against the Binghamton Senators. Saulnier’s hat trick was the team’s first at PPL Center in over three seasons datin back to Danick Martel’s trifecta on October 7, 2017 on Opening Night against the Hershey Bears in a 7-2 win.

800 Club! – 35-year-old veteran Chris Mueller celebrated his 800th career game with his first multi-goal performance of the season. The father-of-four is on his tenth AHL team and has won two Calder Cups in his career (Texas 2014 and Toronto 2018). He becomes just the 40th in AHL history to reach 800 career games and is the AHL’s active goal-scoring leader now with 246 conversions. With his 802nd AHL game tonight, Chris Mueller will move into a tie for 38th all-time with former Hershey Bears great Mitch Lamoureaux whose tenure in different stretches with Hershey in the 1980s and 1990s was primarily as a member of the Flyers organization.

Welcome Back! – The Lehigh Valley Phantoms have received three players from the Philadelphia Flyers ahead of the team’s last three games of the season. Forward Wade Allison and defenseman Cam York return after successful NHL debut stints and goalie Felix Sandstrom arrives from the Taxi Squad looking to continue is hot streak.
Allison has played in eight games with the Phantoms scoring 4-5-9. He played 14 games with the Flyers scoring 4-3-7 including a two-goal game on May 7 against Washington.
York has played in six games with the Phantoms scoring 2-3-5 including the game-winning goal in his most recent Phantoms’ contest on May 5. He played in three games with the Flyers averaging almost 20 minutes of ice time.

Sensational Sandström – Felix Sandstrom has put together five very strong starts after inconsistent opportunities due to schedule interruptions earlier in the season. Dating back to April 24, Sandström is 3-1-1 with a 1.85 goals-against average and .950 save percentage including save totals in order of 37, 32, 40, 34 and 27. He has allowed just nine goals in the last five games on 179 total shots faced. This is quite a turnaround compared to his first five starts of the season from February 27 through April 21 in which he had a 4.76 goals-against average and .838 save percentage.

Phantoms to Make NHL Debuts in 2021 Season:
Maksim Sushko Feb 18, 2021 (PHI vs. NYR)
Tanner Laczynski Apr 3, 2021 (PHI at NYI)
Wade Allison Apr 15, 2021 (PHI at PIT)
Egor Zamula Apr 27, 2021 (PHI at NJ)
Cam York May 7, 2021 (PHI at WSH)
Looking Ahead – The American Hockey League has announced its intention for a full schedule in the 2021-22 campaign for its 86th season which will begin on October 15 and run through April 24.
Still In It – Lehigh Valley has to run the table AND hope for some help in order to overtake the Hershey Bears for the North Division title and the Teddy Oke Trophy. Hershey’s Magic Number to clinch the division is at one standings points. Any loss for the Phantoms (regulation or overtime) or any single standings point by the Bears in their remaining two games will give Hershey the division crown based on points percentage.
Similarly, the Magic Number for Hershey to clinch the Provident Bank Pennsylvania Cup is at one with both teams having a single game remaining in the PA Cup. The Phantoms need to defeat the Penguins on Saturday and also hope for Hershey to lost in regulation against the Penguins on Sunday in order to pass the Bears in the Pennsylvania Cup race.