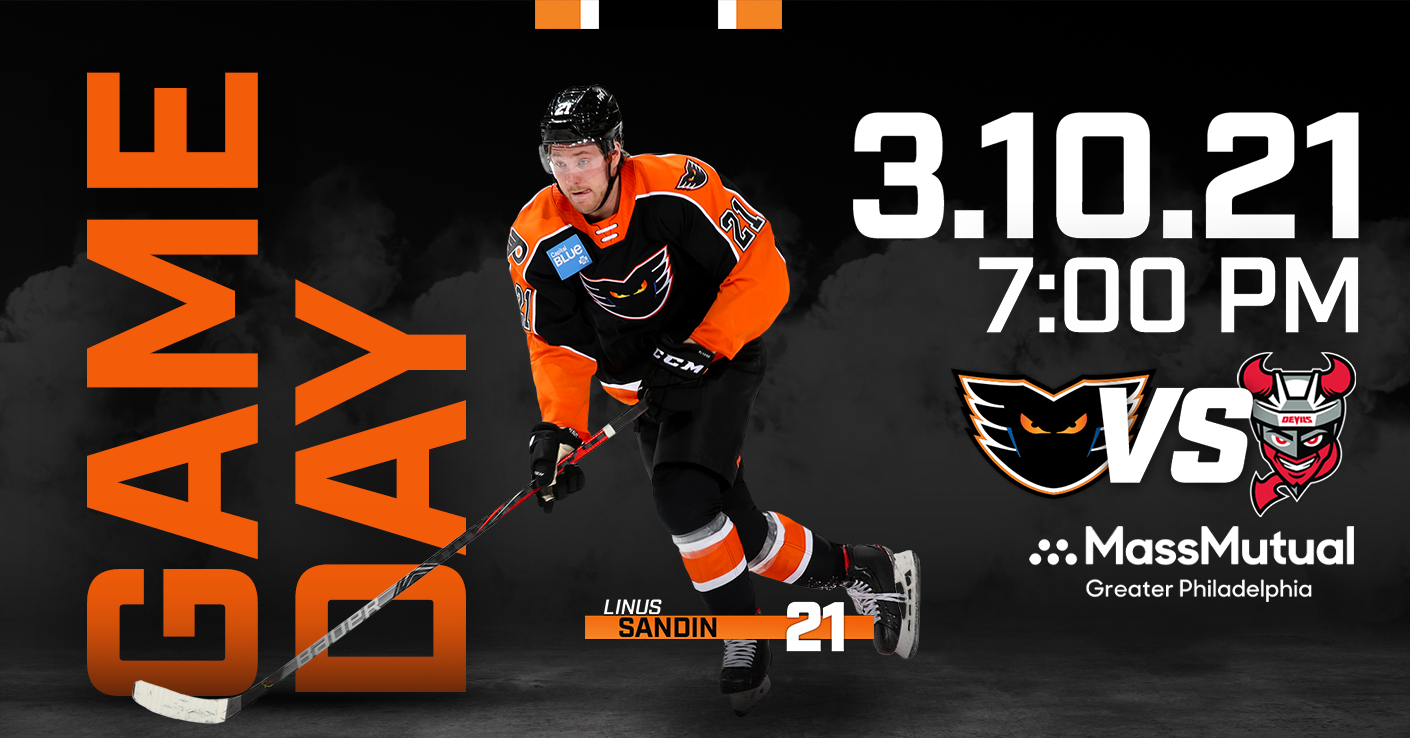 Today’s Game – The Lehigh Valley Phantoms travel to the RWJBarnabas Health Hockey House in Newark, NJ for the fourth of 14 meetings against the Binghamton Devils this season. Lehigh Valley is 2-1-0 against Binghamton this year. Tonight is Game 11 out of 38 in the 2021 season and also the finale of three straight on the road. Tonight is also the opener of a home-and-home series with the rematch coming on Saturday night at PPL Center. The last time the teams met was on February 24 at Newark when Max Willman scored the overtime winner in a 5-4 decision. The Devils started the season 2-0-0 but have gone 0-5-3 since then.

Last Time Out – Ryan Fitzgerald scored his second overtime winner of the season and the Phantoms prevailed at Wilkes-Barre/Scranton 4-3 on Monday night. Brennan Saulnier (1st), Garrett Wilson (1st) and Pascal Laberge (2nd) also tallied for the Phantoms. Zane McIntyre racked up 32 saves in improving to 5-1-1.

Get Your Tickets, Here!! – The Phantoms and PPL Center are pleased to announce they are “Back to Live.” Lehigh Valley Phantoms home games at PPL Center will now be held at 15% capacity. Tickets for all home games have gone on sale and are available to the general public.

Welcome Back – Pascal Laberge returned to the lineup after an injury on February 24 at the Binghamton Devils. He scored a goal upon his return and now has a two-game goal streak with lamplighters on February 24 and March 8.

Long Time Coming – Samuel Morin is back to playing defense and is thriving in his return to the position. His assist on March 3 in his first game back with Lehigh Valley was his first pro point in over three years. Morin’s last point had been 1,138 days earlier on January 20, 2018 in an outdoor game at Hersheypark Stadium. He left that game early with an injury and when he returned in the playoffs in May 2018 had the first of his two knee injuries and surgeries. Morin had played just 11 combined gams in the past two seasons.

Best in the League – The Phantoms boast the two highest scoring active players in the AHL. Cal O’Reilly is first with 617 points while Chris Mueller is second among all active AHL players with 568 points and is first with 242 goals. The 35-year-old Mueller also leads all active AHL’ers in games played with 779. Mueller has won the Calder Cup twice (Toronto 2018 and Texas 2014) and also won an NCAA Frozen Four title with Michigan State.

Let’s Stay Late – The Lehigh Valley Phantoms have played six overtimes in ten games to lead the AHL in extra-period hockey. Lehigh Valley has the most overtime wins (4) and also is tied for the most overtime losses (2). The Phantoms have have all four of their overtime wins on the road this season with Ryan Fitzgerald (Feb 6 at Hershey), David Kase (February 14 at Hershey), Max Willman (February 20 at Binghamton) and Ryan Fitzgerald again (March 8 at Wilkes-Barre/Scranton) scoring the winners. Binghamton’s Brett Seney (February 10) and Wilkes-Barre/Scranton’s Frederick Gaudreau (Feburary 27) have victimized the Phantoms in the 3-on-3 session.
Ryan Fitzgerald became just the third player, and first forward, in Lehigh Valley history to score two overtime goals in a single season. Andy Welinski (2019-20) and T.J. Brennan (2018-19) have also done it.

Scouting the Devils – Binghamton started off strong at 2-0-0 but since then have gone eight straight without a win in an 0-5-3 slump. Last Saturday, the Devils squandered a 3-0 lead against the Penguins to fall 6-3 after allowing 43 shots by Wilkes-Barre/Scranton and a 3-for-7 performance on the power play by the Pens. The Devils had another close call in Hershey on Sunday when Marian Studenic scored a late equalizing goal for the Devils at Hershey with just 33 seconds left. But Martin Fehervary scored the overtime winner for Hershey to extend Binghamton’s winless skid. The Devils are allowing 3.9 goals per game which is worst in the Eastern Conference. Popular Phantoms alum Danick Martel is tied for the team lead with four goals including a shortie against the Phantoms on February 24. 34-year-old captain Ben Street has four goals and seven assists for a team-leading 11 points. Defenseman Reilly Walsh is enjoying a strong rookie campaign since joining the Devils from Harvard with two goals and five assists for seven points.

Milestone for Gordo – Scott Gordon is on his way to becoming just the sixth head coach in AHL history to reach the 400 Win milestone. Gordon has 395 wins in the American Hockey League including 174 with the Phantoms and 221 wins with the Providence Bruins. Gordon is the second active winningest coach in the AHL trailing only Roy Sommer of the San Jose Barracuda who is the AHL’s all-time wins leader with 775.

Upcoming – The Phantoms return to PPL Center on Saturday night to host the Binghamton Devils in a rematch. Then the Phantoms have an earlier start-time after Daylight Savings as they travel to Hershey for a 3:00 matchup on Sunday.