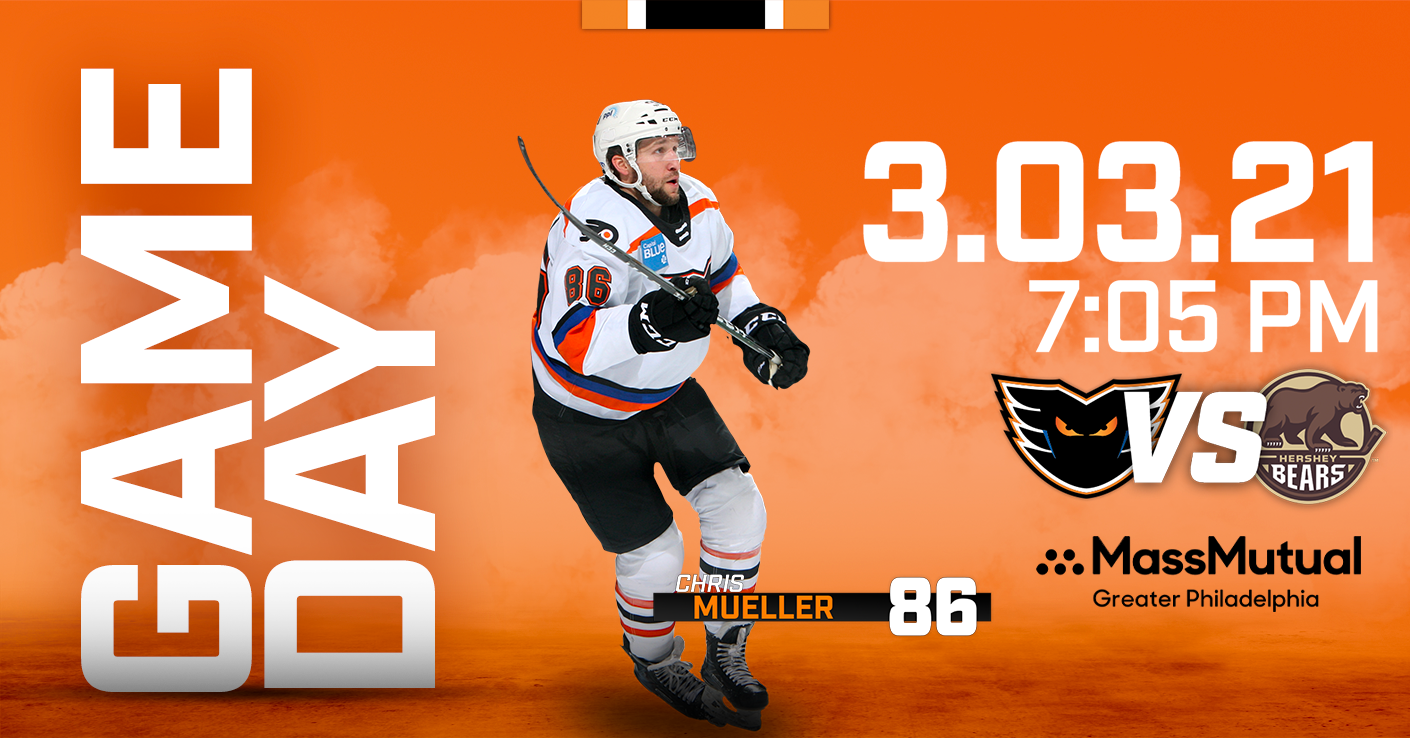 Today’s Game – The Lehigh Valley Phantoms return to PPL Center for the opener of a home-and-home series against the Hershey Bears. It is the first of seven visits to Allentown for the Bears. Tonight is the eighth game of the season and Game 3 of 14 between the two rivals. The Lehigh Valley Phantoms posted a pair of overtime victories at Hershey on February 6 and February 14 with Ryan Fitzgerald and David Kase posting the winners. The Phantoms rallied from behind in the third period in both of their Chocolate Town comebacks.

Last Time Out – Max Willman scored a pair of goals and Zayde Wisdom and Ryan Fitzgerald added lamplighters as well but the Wilke-Barre/Scranton Penguins prevailed in overtime 5-4 on a winner for Frederick Gaudreau. Lehigh Valley’s offense was boosted by an inspired power play that converted twice. Rookie defenseman Mason Millman notched a couple assists for his first professional points. Lehigh Valley earned a standings point for a sixth time in seven outings this season.

Max Effort – 26-year-old winger Max Willman was named the CCM/AHL Player of the Week on March 1 for his tremendous stretch that included a pair of multi-goal games, an overtime winner, and five goals in three games in total during the previous week. Willman is on a four-game goal streak dating back to the previous week which is equal to the longest in the AHL this season. Willman is a second-year pro but is still technically an AHL rookie having played 24 games with the Phantoms last season thus falling short of the official non-rookie threshold of 25 AHL games entering this season. Willman is the first Phantom in five years to win the AHL Player of the Week honors. Colin McDonald was the last to be so honored on January 21, 2016 shortly after a five-point game that included a hat trick as part of a ten-point week. Two Phantoms players won the award in the team’s inaugural season in Lehigh Valley; Nick Cousins on March 15, 2015 and Scott Laughton on October 21, 2014 after scoring the first official goal at the brand new PPL Center.

Wisdom Beyond His Years – The youngest player in Phantoms franchise history is showing tremendous ability and wisdom beyond his years in his first-ever professional games. Zayde Wisdom scored two goals in consecutive games on February 14 and February 20 and scored goals in consecutive games on February 19 and 20 to stay tied with Max Willman for the team lead with six goals apiece. Willman’s goal on February 19 at Wilkes-Barre was perhaps one of the best in Lehigh Valley history maintaining possession despite two players trying to bring him down and then finishing with an elevated backhander while he was blasted from behind. E showed off his backhand skills again the next night with a nifty behind-the-back pass that connected with Max Willman for the team’s first goal of the night.
The fourth-round selection of the Flyers from the Kingston Frontenacs on the OHL became the youngest player in franchise history when he debuted on February 6 at 18 years, 6 months and 30 days old beating the record by just 20 days previously held by Derek Mathers of the Adirondack Phantoms. Wisdom would normally be playing in the Ontario Hockey League currently but while that circuit remains on hiatus the contracted players are allowed to gain experience…and wisdom…with games in the professional ranks.

Special Teams – The Lehigh Valley Phantoms surrendered a power-play goal last Wednesday breaking their perfect penalty kill this season but they are still tops in the AHL at 94.7% having killed 18 of 19 opponent advantage opportunities. The Phantoms power play had been the opposite of that, rating last in the league before coming alive on Saturday with a pair of man-up markers. Zayde Wisdom has scored two of his six goals on the power play.

Sammy’s Back– Samuel Morin was loaned to the Lehigh Valley Phantoms by the Philadelphia Flyers on Monday as the big defenseman-turned-forward continues to progress at his new position. Morin has played one game with the Phantoms on February 6 at Hershey and he also played in the team’s preseason game on February 4 at PPL Center. The former-blueliner has played in four games with the Flyers this year, most recently on February 24 against the New York Rangers. Morin is the first ever to have played for the Phantoms in each of six seasons although that includes just one or two games in a couple of those years. Morin has sustained two different knee injuries dating back to May 9, 2018 and has thus barely played the past two full years. Morin had just 11 total games combined in the previous two seasons and injuries held him back the year before that as well with just 20 total games in the 2017-18 season.

Cal Closes In – Cal O’Reilly is knocking on the door to become only the 10th player in AHL history to record 500 assists. The AHL active’s scoring leader currently has 490 helpers including six this season. O’Reilly’s 616 career point rates 43rd all-time in AHL history. He currently stands 13th in assists and is two away from catching long-time Buffalo Bisons great Larry Wilson (1951-68) for 12th.

Let’s Stay Late – The Lehigh Valley Phantoms have played five overtimes in seven games to lead the AHL in extra-period hockey. Lehigh Valley is tied for the most overtime wins (3) and also the most overtime losses (2). The Phantoms also went to overtime in each of its first four away games before the streak finally ended on February 26 at Wilkes-Barre/Scranton. Ryan Fitzgerald, David Kase and Max Willman have scored overtime winners for the Phantoms while Binghamton’s Brett Seney and Wilkes-Barre/Scranton’s Frederick Gaudreau have victimized the Phantoms in the 3-on-3 session.

Scouting the Bears  – Hershey is coming off a pair of three-goal victories over the Binghamton Devils with 6-3 and 3-0 triumphs on consecutive nights. Zach Fucale recorded the shutout on Saturday in Chocolate Town. Garrett Pilon, son of former NHL’er Rich Pilon, lead the team with eight points including seven assists. 20-year-old first-rounder Connor McMichael has four goals including a hat trick against the Penguins a couple weeks ago. Kody Clark, son of former Toronto Maple Leaf Wendall Clark, has three goals and one assist. Riley Sutter is the son of former Philadelphia Flyer Ron Sutter who was teammates with Phantoms assistant coach Kerry Huffman. 37-year-old captain Matt Moulson has played over 1,000 pro games. He scored 30 goals for head coach Scott Gordon when both were with the New York Islanders in 2009-10 which began his streak of three-straight 30-goal campaign with the Isles.

Upcoming – The Phantoms open a three-game road swing with a Saturday afternoon rematch at Hershey followed by a Monday evening game at Wilkes-Barre and a Wednesday night clash in Newark against the Binghamton Devils.