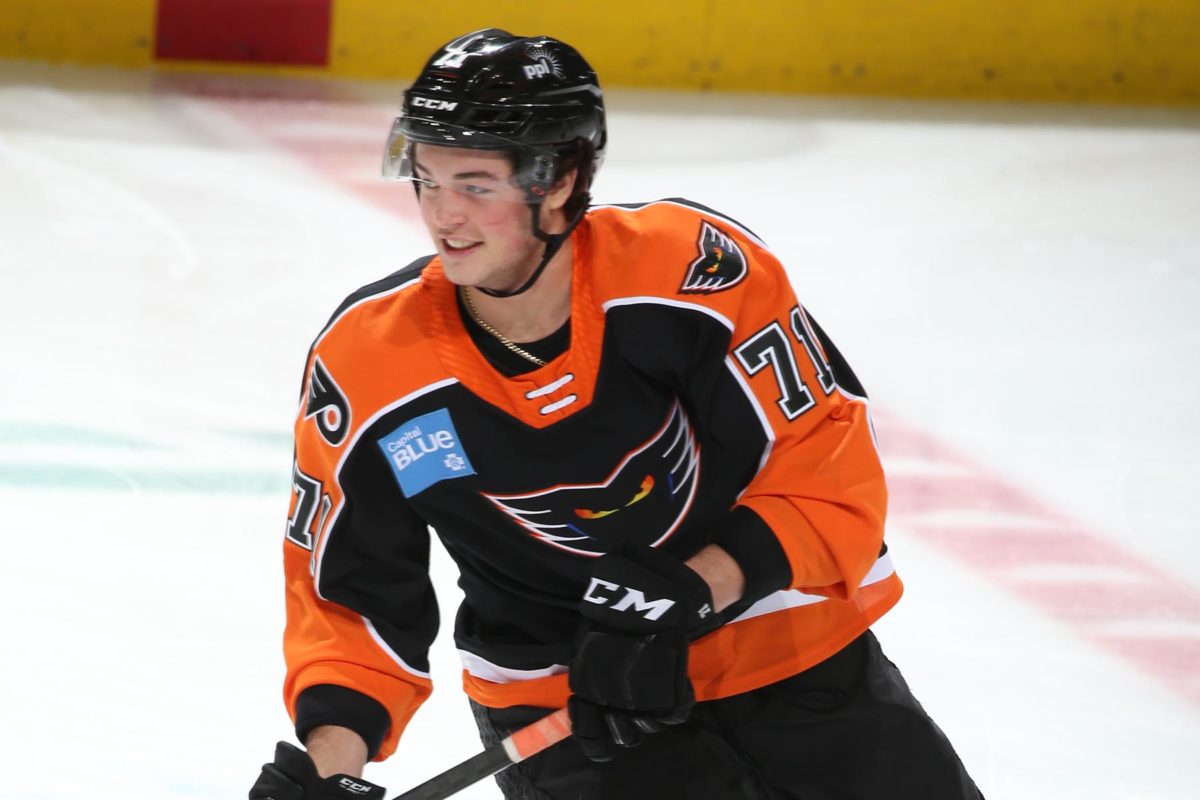 by Tony Androckitis | AHL On The Beat

It’s been quite a whirlwind the past two months for 19-year-old Lehigh Valley Phantoms rookie forward Tyson Foerster.

Foerster, the Philadelphia Flyers’ 2020 first-round draft choice (23rd overall), has been able to get a jump start on his acclimation to the pro game earlier than players his age normally would due to the Ontario Hockey League’s extended suspension of play.

He got quite the scare in his pro debut back on Feb. 6 at Giant Center in Hershey with the Phantoms opening their regular-season schedule on the road against their rival, the Washington Capitals’ AHL affiliate.

In the third period, Foerster tried to start a transition play off the rush in the neutral zone, switching gears and turning with the puck to head the other way. Bears forward Steve Whitney lost an edge trying to get back to defend and slid into an unsuspecting Foerster, leaving a scary-looking play and the rookie forward down on the ice before later being helped off to the locker room.

“I thought it was worse when it happened. I honestly couldn’t feel my leg at all. I couldn’t put any pressure on it or anything and I was kind of nervous a bit,” Foerster recalled.

When it was announced that he’d only be missing four weeks with a fractured shin, it was definitely a sigh of relief amongst the organization and the fanbase that Foerster’s injury wasn’t something overly serious like a knee injury or anything like that.

Upon his return to game action after missing a month’s time, it certainly took Foerster a few games to really get into the swing of things again and playing on a regular basis.

“I didn’t have a bad game. But I still think there’s a lot more I can give,” Foerster said after his first game back on Mar. 3, a 4-3 comeback win over Hershey. “Practice doesn’t really do the justice of playing in a 60-minute game, but all in all, I don’t think I played too bad. But I know there’s still more to give.”

The next time out, one month to date of his shin fracture and in the same building the injury occurred in, Foerster managed to help break Hershey’s shutout bid and register his first pro point in the lone bright spot for Lehigh Valley in a 4-1 loss in Hershey on Mar. 6.

His first pro goal also came in Hershey, on Mar. 14, early in the first period after the Phantoms had allowed a goal in the opening minutes of play. David Kase carried the puck in 2-on-1 on the left wing before passing across to the top of the crease for Foerster, who, with his right-handed shot, was handcuffed on the pass but was able to muscle a backhander into the net for pro goal number 1.

​As the month of March continued, Foerster continued to gain a comfort level in his ability to make plays. He also received praise from head coach Scott Gordon for the pace at which was playing heading into April.

“It’s funny how confidence comes when you work hard. A lot of the stuff that’s happening for him is through a lot of pace that he’s playing with,” Gordon said of Foerster’s strong play of late. “You know, he’s in on forechecks and you play more in the offensive zone as opposed to playing in defensive zone and chasing it, you just you give yourself that opportunity to feel good about your game and and he’s a good example of what hard work will do for you.”

The way he was playing, it was only a matter of time before the offensive breakout arrived. It came at the end of the month, where on Mar. 31 he tallied a four-point night (two goals, two assists), passing on a rush at an empty net to teammate Ryan Fitzgerald to complete the 4-1 final score.

Following up the four-point night with another two-goal game, including the game-tying goal with the extra attacker in the final minute of a come-from-behind shootout win on Apr. 3, Foerster was riding the highs of another three-game point streak in which he tallied seven points (four goals, three assists).

Foerster’s big-game performances in regulation have been followed up by two equally impressive tallies in shootouts this season. After tallying the tying goal Mar. 31 against the Wilkes-Barre/Scranton Penguins, he also tallied the lone shootout tally in the Phantoms’ comeback win.

Foerster is up to 10 points (six goals, four assists) in his last eight games and is certainly starting to get into a groove at the AHL level and being rewarded for his hard work.

He was also quick to credit the coaching staff and the veterans for helping ease the transition to the pro game. And the winning environment sure helps.

The Phantoms sit at 12-3-2-1 heading into Sunday afternoon’s scheduled meeting with Hershey.

“I think the coaching staff and honestly, just like I said before, the veterans on the team are helping us out a lot. We make a little mistake, we fix it. We’re all here to learn,” Foerster said. “And we know if we’re going to be here long then we got to learn from the older guys.”

All in all, the early pro experience has opened Foerster’s eyes of what lies ahead if he wants to make it in pro hockey and achieve every hockey player’s dream of playing in the NHL.

“Just how much harder I have to play, honestly,” Foerster said of his biggest takeaways from the pro game thus far. “I noticed it at Flyers camp and here — how much stronger the guys are on the puck. I mean, in juniors you can just lift their stick and you can take it and have like a two on one or something. But here, everyone’s super strong. everyone’s the same really. So it’s just working for your ice and working for your space to make plays.”