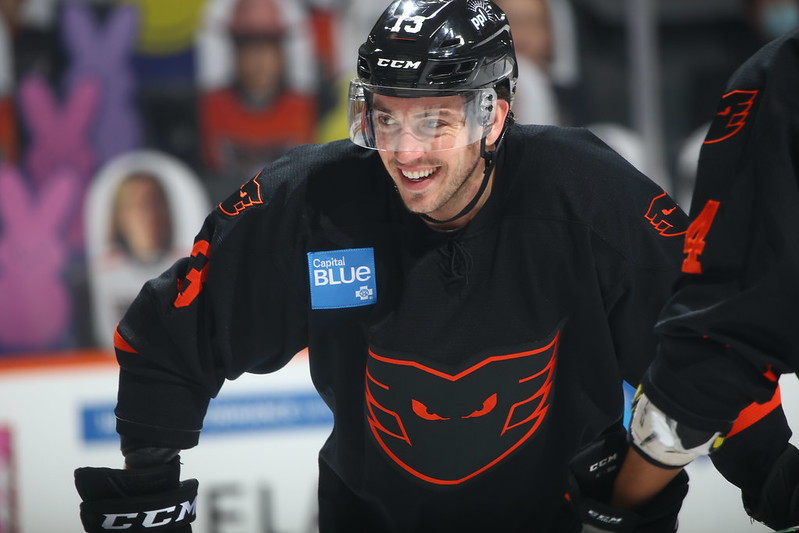 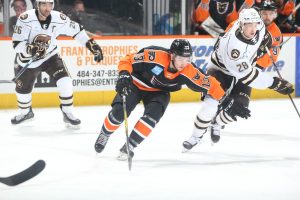 Ryan Fitzgerald, 26, led the Phantoms last year with 12 goals and was second on the team with 21 points in 28 games. Two of his goals were overtime winners.

The Boston College product spent his first three pro seasons with the Providence Bruins. Fitzgerald was a Round 4 selection of the Boston Bruins in 2013 and led Providence in rookie scoring in 2017-18 with 21 goals and 37 points. The speedy 5’9″ left wing has played in 223 games in the American Hockey League scoring 55 goals with 69 assists for 124 career points.

Ryan Fitzgerald is the son of New Jersey Devils General Manager Tom Fitzgerald and is the brother of Casey Fitzgerald of the Rochester Americans. He is cousins with Kevin Hayes and also Brady and Matthew Tkachuk. 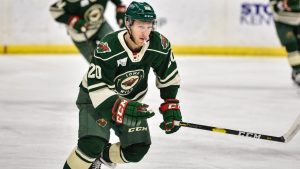 Gerald Mayhew, 28, is a right-handed shooting forward from Wyandotte, Michigan. Mayhew won the Les Cunningham Award as Most Valuable Player in the American Hockey League when he scored 39 goals with the Iowa Wild in 2019-20. He also won the Willie Marshall Award (Most Goals) and played in the AHL All-Star Classic.

The undrafted standout at Ferris State had been awarded Michigan Mr. Hockey as the best high school player in the state in 2010-11 when he scored 44 goals in 30 games with Wyandotte Roosevelt High. Mayhew has played in 228 AHL games over parts of five seasons with the Iowa Wild scoring 97 career goals with 81 assists for 178 points. He has scored the most career goals in Iowa Wild franchise history and is second all-time in career points. Mayhew also has appeared in 17 NHL games with Minnesota scoring two goals with one assist.

Adam Clendening, 28, has played the last three seasons with the Cleveland Monsters. He spent part of last year on the Columbus Blue Jackets Taxi Squad while also playing in nine games for the Monsters scoring one goal with three assists.

Clendening has played in 90 NHL games with seven different teams including Chicago, Vancouver, Pittsburgh, Edmonton, New York Rangers, Arizona and Columbus. He has scored four goals and 20 assists in his NHL career. The veteran blueliner has played in 370 games in the AHL with 40 goals and 203 assists for 243 points.

Clendening is a two-time AHL All-Star Classic participant with the Rockford IceHogs in 2013 and with the Cleveland Monsters in 2020. He was a first-team All-Star selection in 2013-14 rating second among all blueliners with 44 assists and 56 points with Rockford that season. He was also a second-team selection the year before as a rookie.

Clendening is a 6’0″ tall lefty shot from Wheatfield, New York who previously played with the U.S. National Under-18 Team and Boston University when he was a Round 2 selection of the Chicago Blackhawks in 2011.

Nick Seeler, 28, is a lefty-shooting rearguard from Eden Prarie, Minn. who was on the Chicago Blackhawks Taxi Squad for much of the 2021 season. He has previously played in 112 games with the Iowa Wild scoring two goals with 17 assists. He also has played in 105 NHL games with Minnesota and Chicago scoring two goals with 10 assists. A 6’2″ tall left-handed shooter, Seeler played collegiately at Nebraska-Omaha and Minnesota and was a Round 5 pick of Minnesota in 2011.

Cooper Zech, 22, has played the last two-plus seasons with the Providence Bruins following a standout freshman campaign at Ferris State University after which he turned pro with an AHL contract. Zech checks in at 5’10” and is a lefty shooter. He has played in 78 AHL games with Providence scoring three goals with 18 assists. Zech was the first Ferris State freshman in 30 years to lead his team in scoring when he scored 8-20-28 in 2018-19. He also placed tops among all NCAA freshmen defensemen that season.