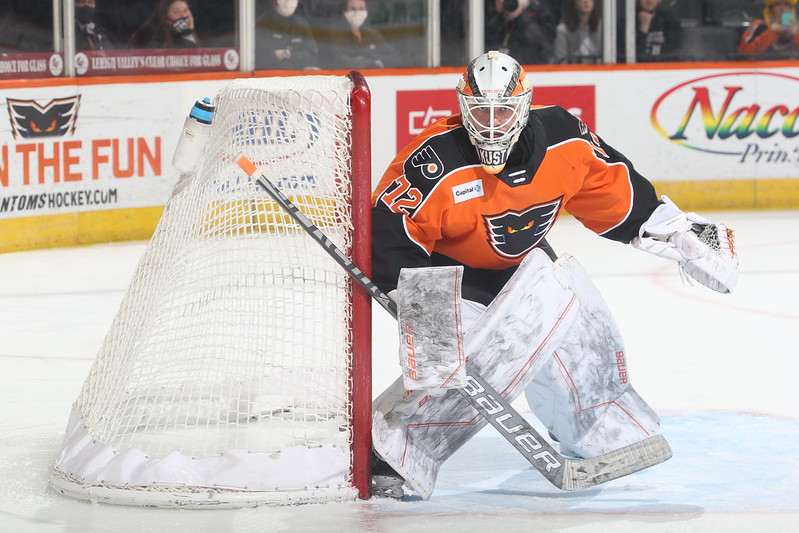 Phantoms Play at Wilkes-Barre/Scranton on Wednesday

February 22, 2022 – The Lehigh Valley Phantoms have announced that goalie Kirill Ustimenko has been recalled to the Philadelphia Flyers on emergency basis after it was announced by the Flyers that Carter Hart is unavailable due to an eye infection.

The Phantoms have also announced that they have signed goalie Alex Sakellaopoulos from the Adirondack Thunder of the ECHL to a PTO (professional try out) contract.

Ustimenko, 23, performed well last weekend after being pressed into relief duty on Saturday. He made 20 saves on 21 shots against Utica to earn a standings point and finished that up with a 30-save game against Springfield. On the weekend, he finished witha  1.66 goals-against average and .942 save percentage. Ustimenko is 0-3-1, 2.66, .914 with the Phantoms this season.

Sakellaropoulos, 27, has played with the Adirondack Thunder of the ECHL this season where he has gone 6-10-0, 3.67, .886. The Tinley Park, IL native was a standout at Union College from 2013-17 where he was also a participant on the 2014 team that won the Frozen Four National Championship in Philadelphia.

Sakellaropoulos has 78 career ECHL games over five seasons  with several teams including Wichita last year and Norfolk and Rapid City in 2019-20 with a career record of 33-32-6, 3.04, .906. He has played in two AHL games in March, 2019 as a member of the Springfield Thunderbirds where he went 0-0-2, 2.90, .900. He also previously had tryout contracts with the Utica Comets and Binghamton Devils but did not appear in any games with those teams.

The Phantoms open a three-game road swing on Wednesday night at the rival Wilkes-Barre/Scranton Penguins. The team then plays a pair of games at the Cleveland Monsters on Friday at 7:00 p.m. and Saturday at 1:00 p.m.