Lehigh Valley, PA – Michael Del Zotto notched a goal and an assist while Jake Voracek added a pair of helpers as the Philadelphia Flyers, parent club of the Lehigh Valley Phantoms, downed the New York Islanders 5-3 Monday evening at PPL Center in the first-ever NHL game played in the Lehigh Valley. The contest, which was thoroughly enjoyed by 7,981 raucous, orange-clad fans, kicked off the second season of hockey at the state-of-the-art facility in fine fashion.

“It was an awesome experience,” Voracek said. “Good thing we got the win for the fans. They saw five goals from us so I would say it was pretty good.” 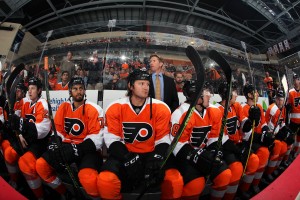 Michael Raffl, Travis Konecny, Vincent Lecavalier and Pierre-Edouard Bellemare also found the back of the net for Philadelphia on Monday in support of the newly-appointed Hakstol’s first professional game after a successful 11-season stint at the University of North Dakota.

“When you’re going through something new I guess everything is a new experience,” Hakstol said. “I was excited to be out there but it becomes business pretty quickly when the puck drops.”

Playing in the current home of the Lehigh Valley Phantoms, the Flyers received contributions from a number of both current and former Phantoms. Raffl and R.J. Umberberg, both Phantoms alumni, contributed a point each while Cole Bardreau, Jay Rosehill, Brandon Manning, and Chris VandeVelde, all members of last year’s Inaugural Season at PPL Center, added a point apiece as well. 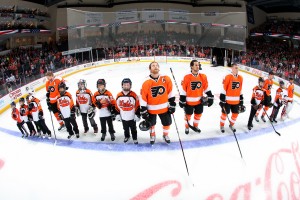 The game served as a perfect kick-off to what is sure to be another incredible season of hockey in the Lehigh Valley. The Phantoms will host a pair of preseason tilts on Saturday, October 3rd and Sunday, October 4th (both 5:05 PM start times) before the regular season gets underway on Saturday, October 10th against the Syracuse Crunch (7:05 PM).

Raffl opened the scoring less than six minutes into the opening period when, while on the power play, Voracek sent a perfectly-placed touch pass into the slot that was expertly directed home by Raffl. Del Zotta grabbed the secondary assist on the man-advantage marker netted 5:56 into the first period. A 26-year-old forward from Austria, Raffl suited in a pair of games with the then-Adirondack Phantoms two seasons ago during which he tallied a goal and two assists.

The Islanders leveled the contest just over two and a half minutes later when a right wing shot by James Wright deflected off the skate of Flyers goaltender Michal Neuvirth and into the back of the Flyers cage.

Despite the even score, it was Philadelphia that dominated the opening 20 minutes outshooting New York 12-5 in the game’s first frame. 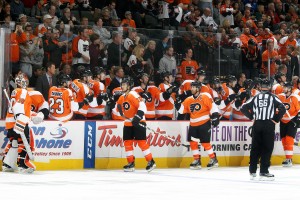 The Flyers regained the lead less than four minutes into the middle stanza when an opportunistic Konecny pounced on a bounding puck atop the Islanders goal crease before backhanding in the go-ahead conversion. Bardreau and Rosehill, fellow Phantoms forwards from a season ago, assisted on the even-strength scored 3:46 into the second period. One of Philadelphia’s two first-round selections in this summer’s draft, Konecny was tabbed with the 24th overall pick in the 2015 NHL Entry Draft.

New York was able to even the tilt once again though as, just over a minute later, Alex Quine’s offering from the right side changed direction above the goal crease before eluding Neuvirth. Kevin Czuczman and Michael Dale Colle assisted on the five-on-five tally notched 5:08 into the middle frame.

Philadelphia bounced right back though and re-established a one-goal advantage less than three minutes later when it converted its second power play in as many opportunities. After a point shot from Evgeny Medvedev made it through to Greiss, a net-mouth scramble quickly ensued, which was eventually won by Lecavalier who swatted in a loose puck at the side of the net. Playing in his first professional game in North America, Medvedev garnered an assist along with Umberger. A 33-year-old forward from Pittsburgh, Umberger spent parts of two seasons with the Philadelphia Phantoms from 2004 to 2005 during which he recorded 24 goals and 75 points across 88 games.

The Islanders leveled the contest for the third consecutive time just over two minutes into the final frame when Justin Vaive scored 2:18 into the period from Anthony Beauvillier and former Phantoms captain Ben Holmstrom. But the Flyers weren’t going to be denied.

Philadelphia grabbed the lead back for good just over a minute later when Del Zotto scored from Voracek and Claude Giroux 3:23 into the final stanza. The Flyers then landed the game’s final conversion with just eight seconds remaining when Bellemare struck into an empty New York net. Fellow Phantoms alumni Manning and VandeVelde assisted on the game’s final marker.

Neuvirth, who signed as a free agent to a two-year contract earlier this summer, earned the victory in goal for Philadelphia after 15 saves on 18 shots. Meanwhile, Thomas Greiss and Christopher Gibson combined to register 24 saves on 29 Flyers shots in the game.

Philadelphia’s power play was a perfect 2-for-2 on the night while New York produced one man-advantage marker in four opportunities.