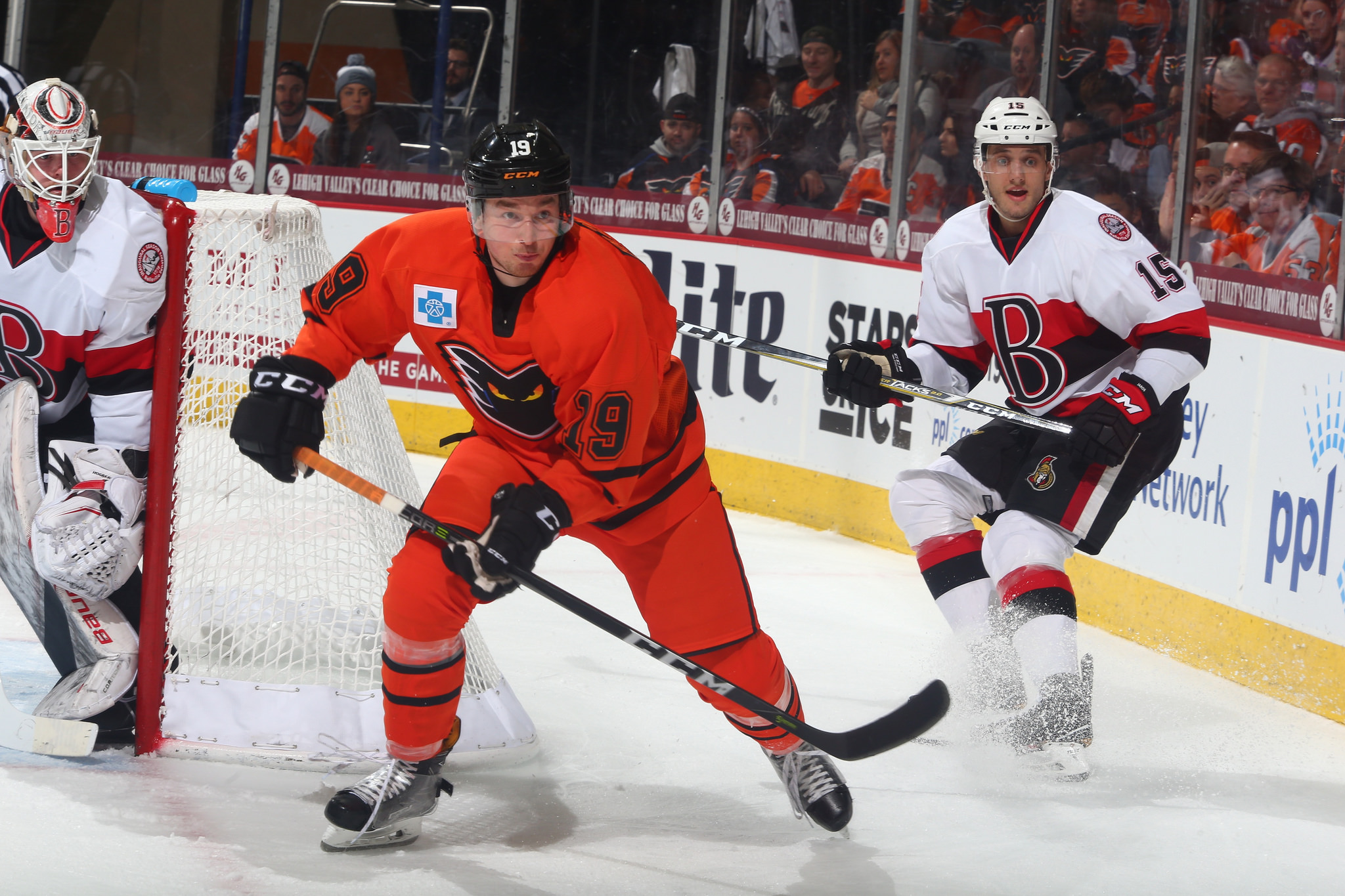 Lehigh Valley, Pa. – No shutout this time but it was yet another win at PPL Center for the first-place Lehigh Valley Phantoms who can seemingly do very little wrong on their home ice. The Phantoms doubled-up the visiting Belleville Senators 4-2 for their fifth consecutive home win.

Greg Carey because the first Lehigh Valley player to reach 30 goals in a season while Colin McDonald (6th), Mike Vecchione (16th) and Cole Bardreau (10th) also contributed to the attack.

The Phantoms improved their overall mark to 44-17-9 and, in so doing, trimmed their Magic Number to clinch the Atlantic Division down to just six points over the Wilkes-Barre/Scranton Penguins. If Lehigh Valley goes 3-3-0 in its remaining six games then the team will automatically lock up the top spot.

That is a significant motivator over the upcoming two weeks for Phantoms captain Colin McDonald whose team has already locked in a position in the Calder Cup Playoffs.

“For sure. Some guys in here might have won a division before but I haven’t as a pro,” McDonald said. “It is something selfishly that I would like to do to have on my resume. It’s a pride. And more importantly than that you don’t want to be sliding going into the playoffs. We want to be playing the right way and kind of on all cylinders.”

Another Saturday sellout crowd of 8,621 packed into the dazzling PPL Center to cheer for the red-hot Phantoms who were sporting their bright orange “Color Rush” jerseys for one final swan-song before a postgame auction of the game-worns for the fans. The packed house represented the team’s 14th sellout crowd of the 2017-18 season and is the 75th jammed gathering all-time in the four seasons of the team since arriving to the corner of Seventh and Hamilton in Center City Allentown.

On home ice, the Phantoms are now a dominating 15-1-2 since January 13th. PPL Center and the frequent sellout crowds have combined to provide the team with the strongest of home-ice advantages in the entire American Hockey League.

Belleville had the initial jump in the contest and Dustin Tokarski was tested early and often by the Senators’ attack. But despite a 14-4 shots advantage for the visiting Senators it was the Phantoms who emerged with a 1-0 advantage through the opening twenty minutes. Even though the Phantoms were ahead on the scoreboard there was still some concern with the proceedings of the opening minutes.

“We just came out slow,” Vecchione said. “But we came back after the first period and regrouped. We were lucky to be out of there one-nothing. “Tik” (Tokarski) played a great game and kept us in it…. It was a great overall win. Not our best but still good to get the two points.”

Greg Carey rushed up the left-wing and sniped through the glove of Marcus Hogberg in the Belleville crease at 12:10 into the first period. Rookie defenseman David Drake notched an assist in his pro debut and Alex Krushelnyski also registered a helper on the play.

The Phantoms showed stronger play in the second period and tacked on a pair of goals to boost their lead to 3-0. Colin McDonald put the puck on net from the base of the left circle at almost exactly the midway point of the game for a power-play goal somehow squeaking through Hogberg and a 2-0 lead. Mike Vecchione and Will O’Neil recorded assists on the play.

Vecchione would later poke-check a loose puck at the Phantoms line with mere seconds remaining allowing him to race away with a 2-on-1. The rookie pivot from Union College opted to snipe from the left circle for an unassisted tally with just six seconds left in the period thus providing the Phantoms a valuable extra marker en route to the locker-room with a 3-0 lead.

The B-Sens finally broke the Phantoms’ incredible shutout streak with consecutive goals two minutes apart in the third period at 7:22 and 9:23 by Jordan Murray and Jack Rodewald to cut Lehigh Valley’s lead down to 3-2 and suddenly the Phantoms found themselves in a much tighter affair again.

Belleville pulled relief goalie Filip Gustavsson for an extra-attacker effort but a slip-up led to 2-on-1 rush towards the empty-net for the Phantoms that was tapped in by Bardreau after the initial steal by Nic Aube-Kubel.

Dustin Tokarski with 27 saves for the win improved to 19-8-6 while securing back-to-back triumphs on the weekend. He held the visiting Senators off the scoreboard until the third period but finally Belleville broke through to snap the team’s incredible shutout streak. Jordan Murray’s goal at 7:22 of the third period was the first surrendered at PPL Center since March 11th against the Binghamton Devils. In between came 102 consecutive saves for Phantoms netminders Dustin Tokarski and John Muse in a streak that lasted a span of 233:30. Lehigh Valley had recorded shutouts in the previous three home games as well as the last 11 periods representing new Phantoms franchise records for consecutive home shutout success.

Tokarski capped a magnificent month of March with some mind-blowing numbers. The 28-year-old from Watson, Saskatchewan went 6-1-1 with three shutouts and a 1.94 goals-against average and .931 save percentage.

Lehigh Valley held the Senators to 0-for-2 on the power play and have now killed 22 of their last 23 opponent man-advantage opportunities in the last seven games. What’s more, the Phantoms have killed 89% of the opponents’ power play chances since January 20th.

The Phantoms continue to pace the circuit in total offense at 3.5 goals per game and picked up three goals in a contest for the 45th time this season. Lehigh Valley is a stunning 40-1-4 when scoring three or more goals.

The Phantoms depart on their last road-trip of the 2017-18 season with a pair of games at the Charlotte Checkers on Tuesday and Wednesday nights in a potential Calder Cup Playoff series preview. Lehigh Valley in first place and Charlotte in fourth place would meet in the opening round of the postseason should both teams maintain those positions in the standings.