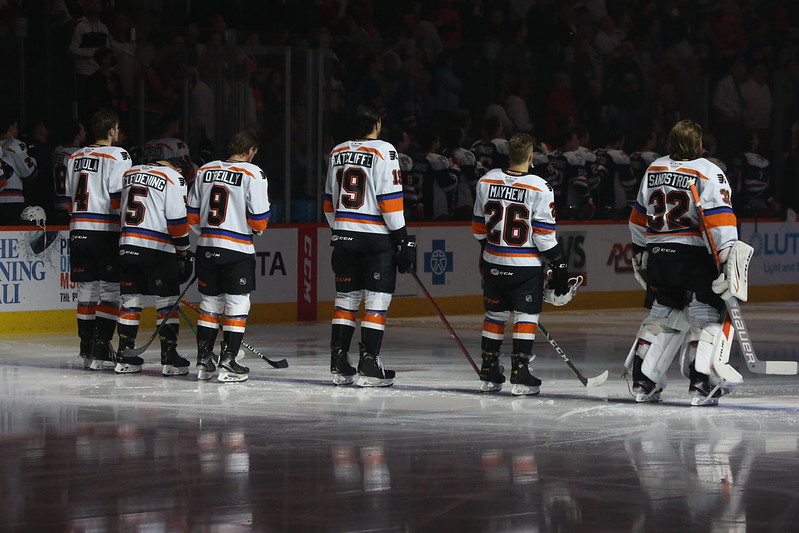 Lehigh Valley, PA – The Lehigh Valley Phantoms celebrated their return to full crowds with a raucous, white-out, rally-towel-waving contingent of 7,514 bringing the noise on Opening Night at PPL Center. But the Hartford Wolf Pack rallied from behind to post a 3-1 victory on Saturday.

It was the first home game in 591 days in which the Phantoms did not have attendance restrictions. The last time the Phantoms had a crowd this large was 594 days earlier on March 8, 2020 against the Bridgeport Sound Tigers in what was the team’s 100th all-time sellout at PPL Center. 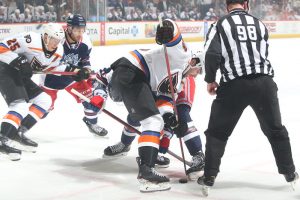 Undoubtedly, this one was special. After an abbreivated and unusual 2020-21 season with limited attendance and reduced capacity, the fans were ready to cheer and wave their towels in a noise-filled continuation of this Opening Weekend that had begun 24 hours earlier with the My Why Tour game between the U.S.A. National Women’s Team against Canada. The game felt like a return to before the pandemic but with an amped-up energy that area fans had been waiting and waiting to let out.

Felix Sandstrom was sensational between the pipes for the Phantoms with 38 saves on 40 shots. The second-year Phantom posted a number of spectacular stops in the third to preserve a 1-1 tie as long as he could but Jonny Brodzinski received a wide-open opportunity uncovered in the slot which he buried for the game-winner with 5:02 to play.

The Lehigh Valley Phantoms (0-3-0) struck first on a shorthanded breakway goal for Max Willman in the closing seconds of the first period. Morgan Frost had poke-checked the puck away in the neutral zone and Willman zipped up the left wing and shot the puck past the right skate of Hartford goalie Adam Huska for the 1-0 lead.

Hartford’s (3-1-1) equalizing goal in the opening minutes of the second period came on one of those weird kind of bounces that are a hallmark of the sport. Ty Ronning’s shot on the rush from the left wing was kicked out by the left pad of Sandstrom but it bounced off a Phantoms player hustling and into the net for the unlucky equalizer.

Brennan Saulnier threw a pair of rocking forechecks in the first period to ignite the crowd on his special weekend in which he saw his sister play on the same ice with Team Canada just 24 hours earlier. Saulnier dropped the gloves in the second period with the bigger P.C. Labrie to further ignite the Phantoms’ faithful. 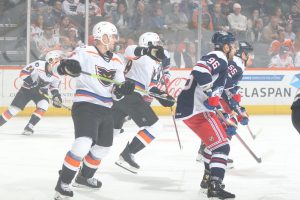 Jonny Brodzinski was open in front of Felix Sandstrom with 5:02 remaining to blast home the go-ahead goal for the Pack after Sandstrom had done everything he could to hold off Hartford and keep the game tied. Just two minutes before the go-ahead goal came a scintellating save off the right pad to deny Ty Ronning on the backdoor. His best stop of the evening drew raucous applause from the astonished PPL Center contingent.

The Phantoms had a 6-on-4 late in the game but were unable to break through against Hartford netminder Adam Huska despite buzzing immediately in front. Huska earlier had recorded consecutive saves on Tyson Foerster and Cam York back-to-back that were among his best of the evenings.

Hartford’s Anthony Bitetto eventually emerged from the penalty box just as his team was securing possession and he sealed the win with an empty-netter late after the Phantoms couldn’t cash in during their power play. Garrett Wilson went after Bitetto right after the goal as a response to the interference penalty he had taken on a hit against Saulnier two minutes earlier. 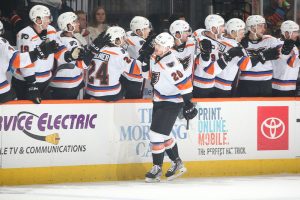 The Lehigh Valley Phantoms conclude their Opening Weekend on Sunday afternoon against the Wilkes-Barre/Scranton Penguins with a 3:05 p.m. puck-drop at PPL Center. Tickets for the finale of our kickoff weekend are available at bit.ly/OPENINGWEEKEND

Be sure to visit our Phantoms Phrenzy in downtown Allentown and the Arts Walk before the game featuring live music, restaurant discounts, and lots of fun. And don’t forget to WEAR WHITE!!