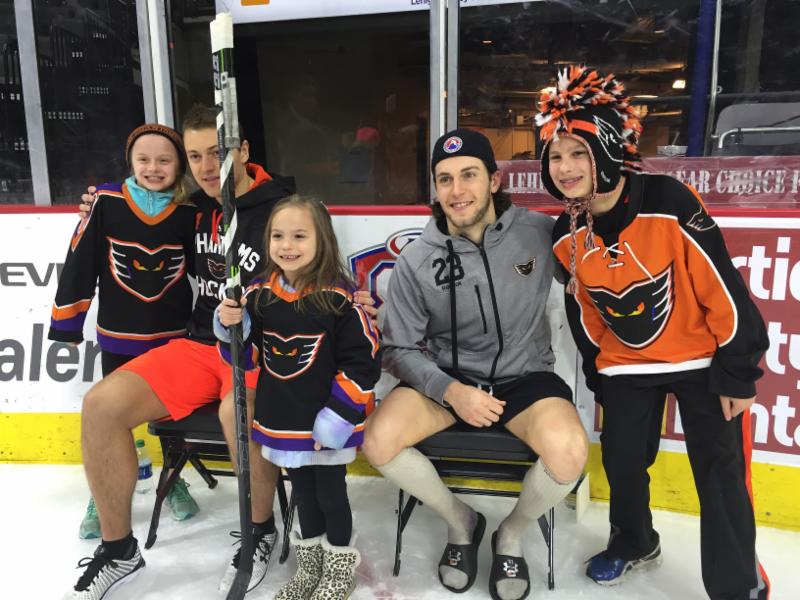 Lehigh Valley, PA – Danick Martel scored his team-leading 18th goal of the season and newcomer Phil DeSimone scored his first in North America in over three years but the Utica Comets pulled off a 5-2 victory at PPL Center on Saturday night. Taylor Leier had a two-point night for the Phantoms on a pair of assists.

Another sellout crowd of 8,675 packed into PPL Center to cheer on their hometown team. Many of the fans stayed late for the opportunity to meet and greet the players in the team’s special Postgame Photographs event. The game was the team’s 13th sellout of the season and also their eighth sellout in their last 10 games. 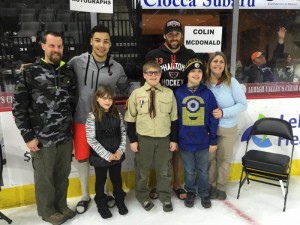 Hundreds of fans lined up to chat up and pose with their favorite Phantoms who emerged from the locker room after the game with smiles on their faces for the kids and adults who cheer for them with such enthusiasm. The longest queue was perhaps for the station in the corner occupied by Petr Straka and Taylor Leier. But the lines to meet all of the individuals on the Phantoms were quite impressive. Even the mascot meLVin posed for pics with his adoring fan-base!

Arriving for their debut visit to downtown Allentown, the visitors from center New York recorded lamplighters from five different players en route to the decision. The affiliates of the Vancouver Canucks struck twice in the first period and added two more in the second before completing their offensive output with a late empty-netter.

Anthony Stolarz received his first start in two weeks having recently returned to the Phantoms from his call-up to the Philadelphia Flyers. While trying to shake off the rust, Stolarz was touched for three goals before making way for Jason LaBarbera in the second period. 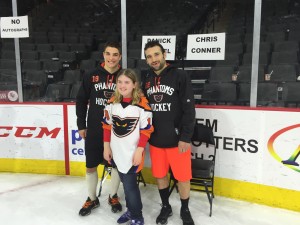 Shields scored just over eight minutes into the game on a drive from the right point immediately following a faceoff win. His shot might have changed direction ever-so-slightly off a Phantoms stick to narrowly elude Stolarz.

With just over seven minutes remaining in the first period it would be Ronalds Kenins converting in the slot after an extended cycle in the zone set up the strike.

The Phantoms charged back with under five minutes remaining in the period. Phil DeSimone, acquired by the Phantoms three weeks ago, drove home his first goal as a Lehigh Valley Phantoms from the right slot on a set up from behind the net by Chris Conner. Taylor Leier recorded the secondary assist on the play.

The red-hot Conner now has points in 11 of his last 12 games scoring seven goals and 10 assists for 17 points in his impressive stretch.

The goal was a momentum boost for the Phantoms heading into the locker room trailing 2-1 and Lehigh Valley emerged from the second period ready to tie the score but Bachman made a couple of key and timely saves.

Darren Archibald’s snapper from the right circle found the net at aobut the four-minute mark of the second period for a 3-1 Comets’ advantage at which point Phantoms head coach Scott Gordon made the decision to go with the 36-year-old veteran LaBarbera the rest of the way. 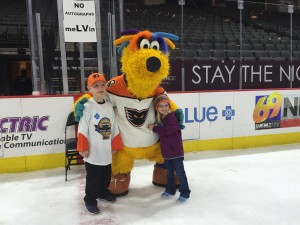 Rookie Cole Cassels added to the advantage with his shot from the slot that also was possibly tipped off a Phantoms stick. It was the only goal allowed by LaBarbera on 21 shots faced.

Still trailing 4-1 in the third period with precious time ticking away, Gordon made the decision to remove his goalie in favor of an extra attacker with 7:31 remaining lifting the team’s spirits on the bench with the “never say die” attitude.

Lehigh Valley pressured with the extra attacker in their efforts to close the margin but eventually the Utica Comets escaped from the zone and Shinkaruk’s empty-net strike with 6:17 left provided the visitors with a 5-1 margin.

Danick Martel displayed a fine individual effort with under four minutes remaining danging around a Comets defenseman on his rush into the zone and then beating Bachman five-hole for the game’s final goal. Leier while falling near the benches at the red line still was able to nudge the puck forward to Martel to spring him free for the opportunity. Samuel Morin recorded a helper on the play as well.

Utica out shot the Phantoms 40-23. Both teams went 0-for-1 on the power play in the nearly-penalty-free game. The Phantoms will host Utica in a rematch on Saturday, February 27th in the final game of the season series.

The Phantoms continue their homestand next weekend hosting the Springfield Falcons (AZ) and Bridgeport Sound Tigers (NYI) on Friday, February 19th and Saturday, February 20th. Friday’s game is Youth T-Shirt Night for the first 2,500 kids in attendance age 14 and younger. A limited number of tickets remain so be sure to secure yours now at pplcenter.com, by calling 610-347-TIXX [8499] or in person at the Mealey’s Furniture Box Office at PPL Center [701 Hamilton Street].