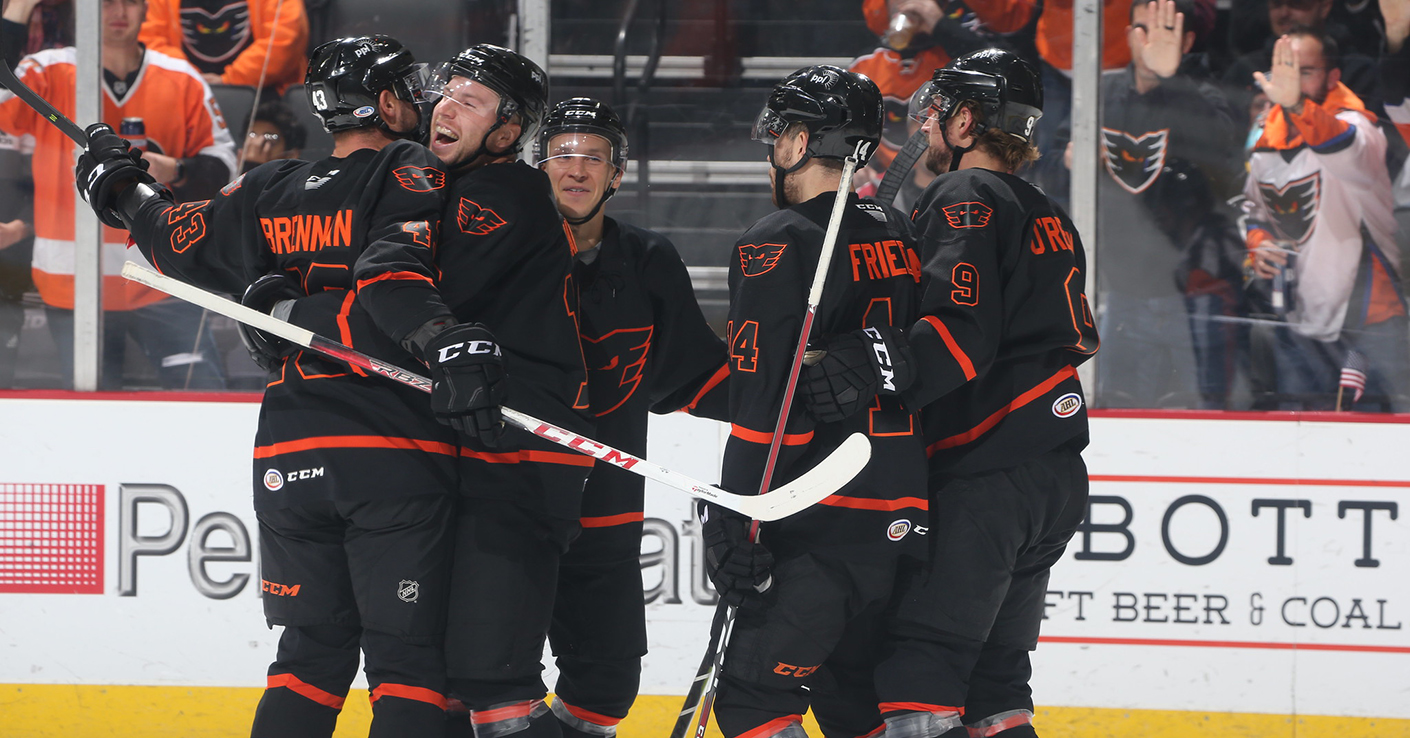 Carey, O’Reilly and Brennan all tally multi-point games in the win

Lehigh Valley, Pa. – The Lehigh Valley Phantoms (5-2-1-3) defeated their in-state rival, the Wilkes-Barre/Scranton Penguins (5-5-1-1) by a score of 4-2 on Wednesday night as the team honored the men and women of the military with over 3,160 tickets donated to veterans and active members of the military. On the ice, three different Phantoms recorded multiple points including two goals and an assist for Kyle Criscuolo who scored his 100th career point in the victory.

The Phantoms donned their black jerseys for the first time in 2019 as they looked to carry over their Wednesday success from last season. During the 2018-19 season, the Phantoms went 8-3 in mid-week matchups. Wednesday night also saw forward German Rubstov make his return to the PPL Center, playing his first game with the Phantoms since October 26 after spending the last two weeks with the Philadelphia Flyers. 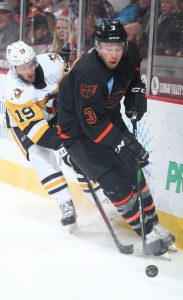 Wilkes-Barre/Scranton would be the first to score in this one when Jake Lucchini put one past Phantoms goalie J-F Berube with an unassisted goal at the 2:21 mark of the first period.

Nate Prosser, who wore the “C” in tonight’s game dropped the gloves for the first time this season after Penguins forward Ryan Haggerty boarded Mark Friedman. The Phantoms responded to the fight, accordingly and just four seconds later tied the game when defenseman Andy Welinski received a pass off the faceoff and fired a one-timer from just in front of the blue line that blew past Penguins goalie Casey DeSmith to tie the game at one. It was Welinksi’s first goal of the season after scoring a total of nine goals last year in the Anaheim Ducks organization.

Following Welinksi’s goal, the two teams traded scoring chances in the remainder of the first period but saw no additional goals scored. Both goalies in the period were kept busy with 19 total shots on goal in the period, including nine from the Phantoms. 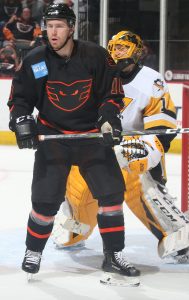 In the second period, it wouldn’t take long for the action to pick back up as Phantoms forward Greg Carey danced past a Penguins defender and then beat DeSmith stick side to put the Phantoms up 2-1. The goal was his third of the season and third in the last five games. Just a few minutes later, the Penguins would score on an odd-man rush when Joseph Blandisi found Ryan Haggerty in front of the Berube to tie the game at 2-2.

For the remainder of the second period, it was intense but scoreless until late in the period when the Phantoms took the lead as Kyle Criscuolo picked up his second goal of the season as he ripped a slap shot from the left circle that rang off the post and in. The goal was his second point of the game and also his 100th career AHL point. The goal was assisted by Cal O’Reilly and Greg Carey. The Phantoms entered the second intermission with a 3-2 lead.

The third period was a much quieter period in offensive action as the two teams combined for just six shots. Kyle Criscuolo put the game out of reach and secure the Phantoms victory in the final minute when he scored an empty-net goal from the Phantoms end to make it a 4-2 game. It was his first two-goal game since February 16, 2018, which also game against the Wilkes-Barre/Scranton Penguins when he was a member of the Rochester Americans.

Next Time Out: The Phantoms will return to the ice at PPL Center on Saturday night when they take on the Hershey Bears at 7:05 pm. It will be the second matchup between the two interstate rivals this season after last meeting on October 12th. Saturday night is also Boy Scouts of America Night, fans can buy tickets for the game, HERE.