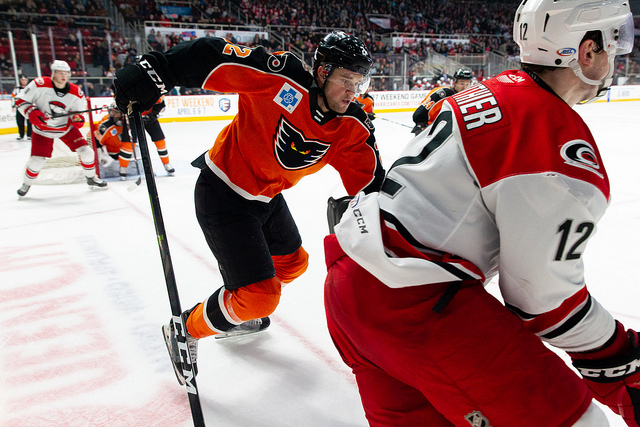 Charlotte, N.C. – The Lehigh Valley Phantoms looked for another dramatic third-period comeback on Saturday night at Charlotte but a late goal that was negated by the officials helped boost the host Charlotte Checkers to a 5-2 win.
Carsen Twarynski thought he had scored with 9:58 remaining to potentially cut the lead down to 4-3. He fired the puck into the back of the net on a rebound from close range during a delayed penalty against the Checkers but the lamplighter was immediately washed out by the official who potentially deemed that Charlotte may have regained possession at some point in the sequence.

Mike McKenna took the loss for the Phantoms while turning aside 26 shots. Alex Nedeljkovic recorded his league-leading 26th win of the season with 28 denials including several big stops in the third to thwart the comeback efforts of the Phantoms.

Rookie forward Pascal Laberge made his season debut. The 20-year-old prospect has been rehabbing all season following his hip surgery in September and was finally ready to get into the lineup this weekend. 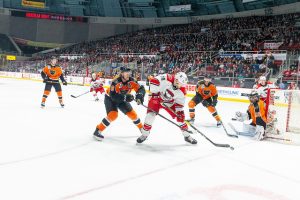 Didier’s goal on a pick-off at the high-slot was sniped to the upper-left corner less than 6:00 into the game to provide Charlotte a 1-0 lead.

Aube-Kubel scored close-range after an intercept at the blue-line by Connor Bunnaman who promptly connected down low for the momentum-lift into the locker room on the score with just 12.7 seconds left in the first period for a 1-1 tie.

Charlotte scored a pair in the second period. From the left of the cage, Potuarlski flipped a puck over the right pad of a sprawled McKenna that bounced to the line but was pulled out on the stick of the Phantoms goaltender on what appeared to be a miraculous save. But video-review confirmed that the puck had indeed barely crossed the line for a 3-1 lead for the Checkers.

Gauthier scored early in the third for a 4-1 lead but the Phantoms quickly struck back with 13:00 remaining when Huntebrinker pounced on the rebound of a Reece Willcox shot following a nice pass across from Mike Vecchione. The Huntebrinker goal pulled the Phantoms to within two that almost became one on the Twarynski shot into the net that didn’t count.

The Phantoms shortly thereafter went on an extended 5-on-3 power play for a 1:52 but several key locks from Charlotte defenders helped erase the best chance for Lehigh Valley to cut into the lead further.

Gauthier scored in the last minute of the game on a delayed penalty to provide for the 5-2 final score. 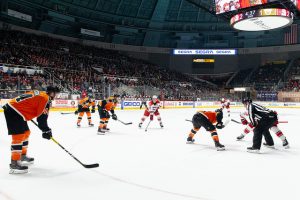 Shortly before the game, it was announced that Corban Knight had received a promotion to the Philadelphia Flyers. Knight had six points in just four games since arriving to the Phantoms a couple weeks ago following shoulder surgery in October.