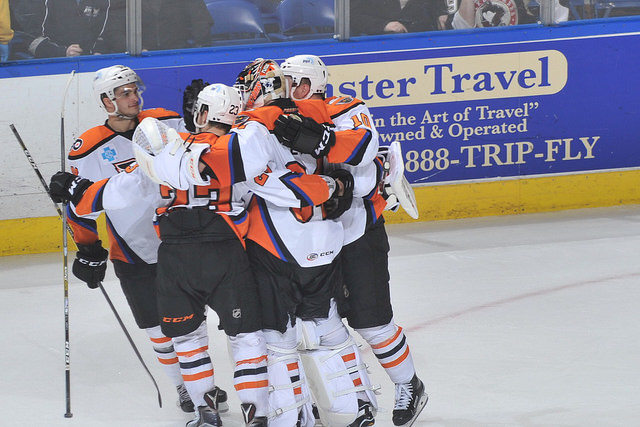 Lehigh Valley Rallies Back in 3rd and Shootout for Historic Victory

Wilkes-Barre, PA – Playoff Hockey is coming to PPL Center! The Lehigh Valley Phantoms officially clinched a spot in the Calder Cup Playoffs with a 2-1 shootout win at the first-place Wilkes-Barre/Scranton Penguins on Wednesday evening. The Phantoms’ 46th win of the year pushing their season point-total to 97 locks up an invite to the American Hockey League’s Big Dance.

The Phantoms will open the Best-of-Five first-round of the Calder Cup Playoffs sometime next week. Lehigh Valley can obtain home-ice advantage for the first round with one more victory in their remaining two regular season games. As of the current standings, the Phantoms would tangle with the Providence Bruins in the opening series. And potentially could meet the rival Wilkes-Barre/Scranton Penguins yet again in the Division Final in May. 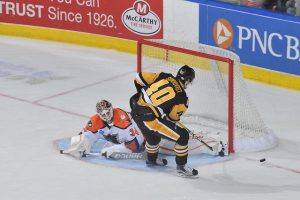 The 2017 version of the Calder Cup Playoffs will mark the first appearance for the Phantoms since arriving to the Lehigh Valley. The Phantoms enjoyed plenty of success in the AHL postseason when they were based in Philadelphia and played at Spectrum. The Philadelphia Phantoms won Calder Cup Championships in 1998 and 2005.

The team was aware that the playoff spot had become official even before the game against Wilkes-Barre/Scranton was over. When the game was tied at the end of regulation the Phantoms were guaranteed at least one standings point which was all the team needed entering the evening.

Taylor Leier (12th) scored a late tying goal for the Phantoms and then Corban Knight scored his second shootout winner of the season after a wild overtime period. The Phantoms improved to 3-0 in shootout games.

In most situations one would expect a team with 97 points to have long-since officially clinched their position in the postseason. Several teams around the AHL with a lower point-total than the Phantoms have been locking up their spots one after another. But in the ultra-strong Atlantic Division with five of the best teams in the league fighting it out for four spots, the drive for the Calder Cup Playoffs appearance required a bit more patience.

“In other divisions we’d be in by a long shot by now,” Taylor Leier said. “But that’s not the way it works. Winning today was a business day. And winning this weekend is important too to get home-ice advantage. Today was definitely a big day and a big step for our team.” 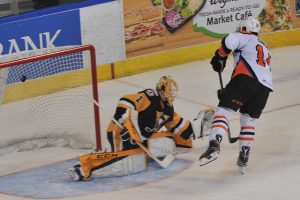 Alex Lyon was magnificent in net when pressed into early relief of Anthony Stolarz who left the game just 1:32 into the contest with an apparent lower-body injury. There was no update on the status of Stolarz. Lyon made 33 saves on 34 shots he faced including some dandies back-to-back on Troy Josephs early in the second period with the glove and left pad. Lyon turned in another beauty with a sparkling glove denial of Zack Aston-Reece aiming for the far post from the left circle.

Lyon looked on the positive side of the adversity of his unexpected entry into the game that followed the Stolarz injury.

“There’s a little bit less pressure,” Lyon said. “Not that the expectations are any lower but you’re just jumping right into the game and there’s already a flow going. It kind of fit well.”

Fireworks developed in the opening seconds of the contest when Samuel Morin dropped the gloves with Garrett Wilson in efforts to settle an old score. After the punches, the two combatants continued their issues with some spirited words screamed across the penalty box. 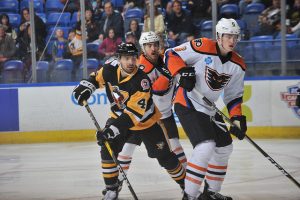 The Phantoms penalty kill came through in a big way in the first period with three consecutive successes including a four-minute double-minor assessed to Morin for high-sticking. The Phantoms are on a 21-for-21 streak on the penalty kill and are perfect through six games in the month of April.

It looked as thought the Phantoms were on the verge of the opening conversion inthe second period with the trio of Cole Bardreau, Corban Knight and Greg Carey all firing away on Penguins netminder Casey DeSmith. But the last effort on a close-range chip by Bardreau missed high and somehow landed on the top of the cage.

Wilkes-Barre/Scranton pushed on and eventually tallied the evening’s debut lamplighter at 5:10 into the third period finally breaking the scoreless goaltenders’ duel. A neutral-zone pickoff led to a rebound put-back by Dominik Simon (15th) for a 1-0 lead for the Penguins.

Lehigh Valley played their best hockey of the night in the third period, as has been their hallmark for the majority of the season. The Phantoms were out-shooting the Penguins 16-5 in the final frame at one point and almost evened the score on a couple close range chances again by Carey and Knight. But DeSmith stood tall and somehow preserved the lead. 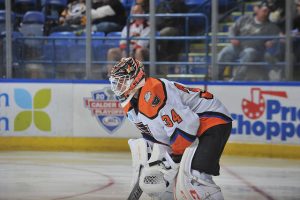 Eventually the Phantoms wore down Wilkes-Barre with even more sustained time in the attacking zone. Colin McDonald muscled his way through a couple Penguins skaters to win the puck in the corner eventually connecting with Max Lamarche whose shot was knocked down by DeSmith but immediately capitalized by Taylor Leier (12th) driving to the net.

Once the clock reached triple-zero with a 1-1 tie, the Phantoms could celebrate the official moment of clinching a berth in the postseason. But there was still work to be done.

Both teams had some glorious chances in the 3-on-3 overtime session while Lyon and DeSmith continued their acrobatics and wizardry.

Eventually, Corban Knight converted in the second round of the shootout past the glove of DeSmith leading to Alex Lyon’s left-leg save in the third round on Oskar Sundqvist to finish the exciting 2-1 verdict.

Shots in the game were even at 35-35. Lehigh Valley was 0-for-1 on the power play while Wilkes-Barre/Scranton finished at 0-for-3. All of the game’s penalties took place in the third period.

The Phantoms conclude the regular season this weekend with the home finale on Friday night against the Providence Bruins followed by the last game of the campaign at the Binghamton Senators on Saturday.