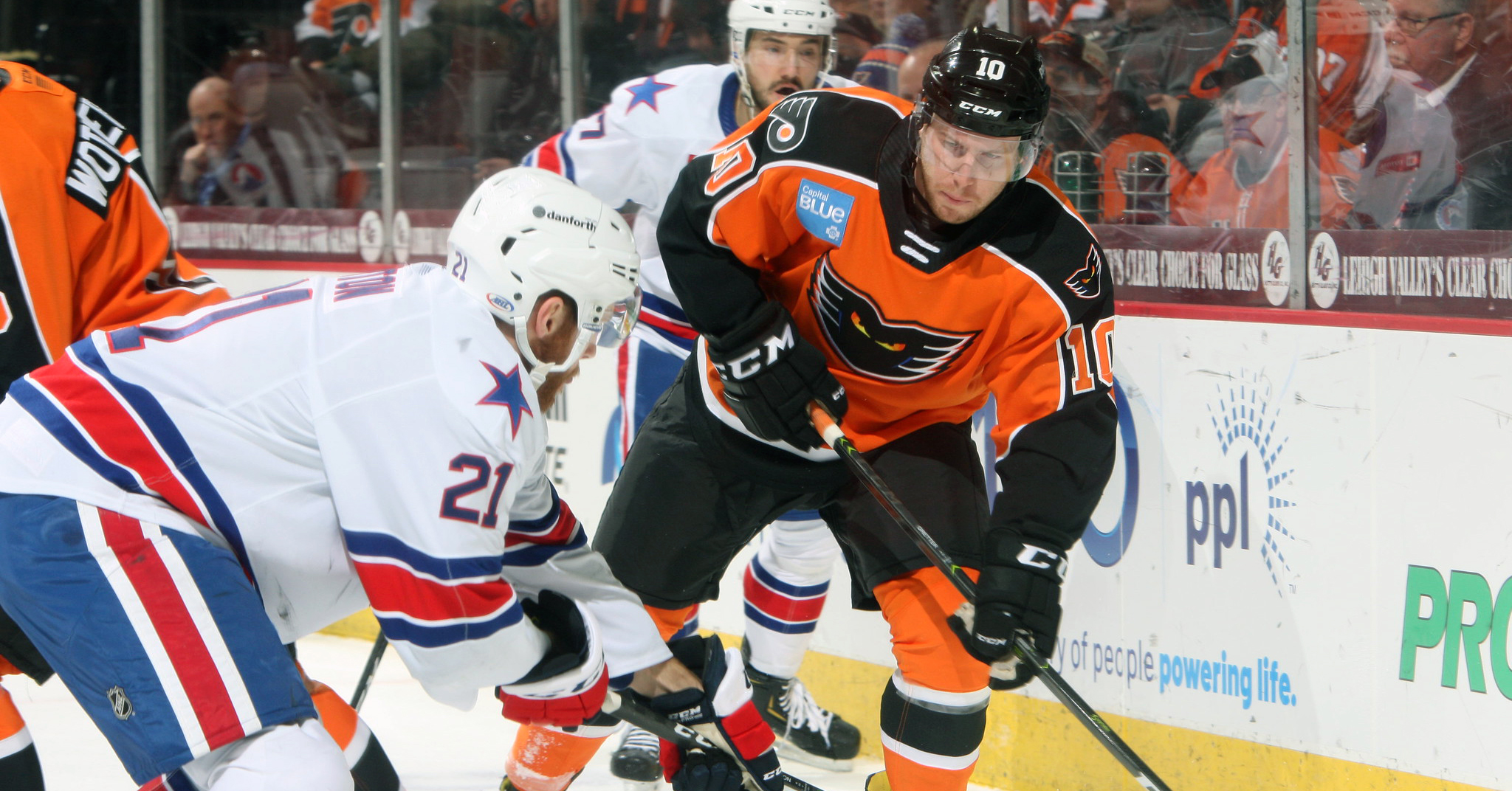 Lehigh Valley, Pa. – The Lehigh Valley Phantoms (18-19-1-4) completed a sweep of their five-game home stand on Saturday night, defeating the Rochester Americans (21-12-2-4) by a score of 4-0. Continuing a stretch of strong offensive play by the Phantoms, Greg Carey scored two goals in the game, including his 100th goal as a Phantom and goalie J-F Berube recorded his second shutout of the week with 20 saves in the win.

The Phantoms jumped out to a 1-0 lead for the fifth consecutive game at the 5:48 mark in the first period, when Greg Carey netted a power-play goal, his 11th of the season. Morgan Frost took a wrist shot from the top of the right circle, which was redirected across the crease by Cal O’Reilly and knocked in by Carey.

Max Willman scored the second goal of the game, and his second of the season at the 13:32 mark of the period. Chris Bigras gathered the puck behind the net in the defensive zone before feeding it to Kyle Criscuolo. Criscuolo then passed it across the ice to Willman, who shot it in above the glove of Rochester goalie Andrew Hammond. The assist extended Criscuolo’s point streak to three games. 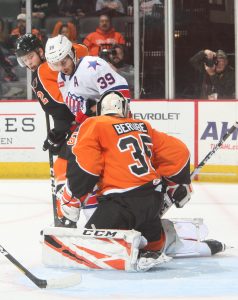 With just over ten minutes gone by in the second period, Greg Carey scored his second goal of the game, and 100th goal with Lehigh Valley to make the score 3-0. David Kase picked up the puck before Hammond could reach it and passed it to Carey, who had a lot of open net to work with as he shot it in before Hammond could regain his position. Carey became the first player to score 100 goals with Lehigh Valley, and moves him into a tie with Kirby Law for third place in goals scored in Phantoms franchise history.

Mikail Vorobyev tacked on another goal at the 14:46 mark in the third period. Isaac Ratcliffe gained possession behind the net before passing it out to Vorobyev, who wristed it in. The play was initially called no goal, but was changed upon further review, as the puck hit the top interior of the net. Ratcliffe tallied his third point in two nights with the assist.

The win extends the Phantoms’ streak to five, and it was also the third consecutive game in which they scored four goals, a feat they had not accomplished since the 2017-18 season.

It was also the fourth time in five games that the Phantoms allowed one or fewer goals. Goalie J-F Berube notched his fourth consecutive win, and second shutout in that span. Alex Lyon also recorded a shutout at the beginning of the five-game homestand.

NEXT TIME OUT: The Phantoms will kick off a five-game road trip on January 22 when they take on the Providence Bruins at 6:05 p.m. Providence defeated Lehigh Valley on October 5, the only meeting between the two teams this season.