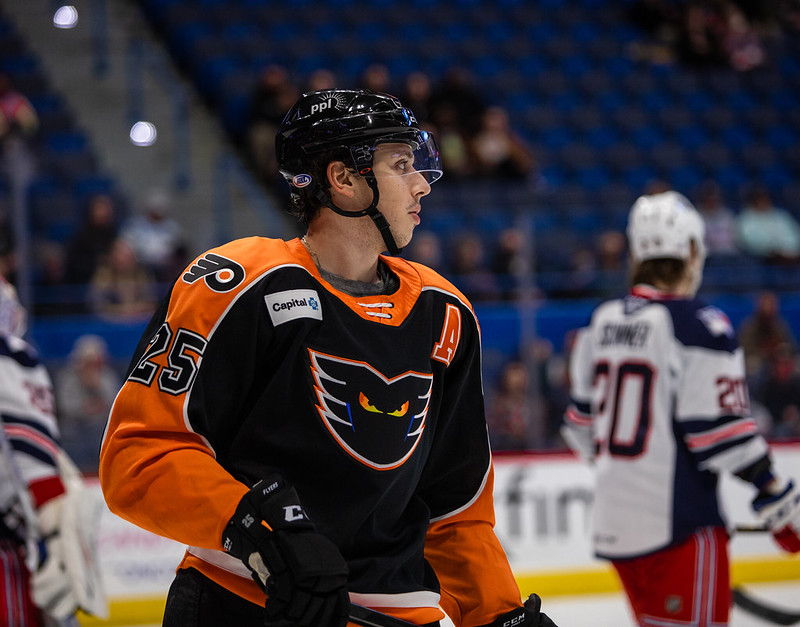 Lehigh Valley, PA – Connor Bunnaman broke a 1-1 tie late in the second period with his second goal of the season and Pat Nagle was outstanding again in a 24-save performance as the Lehigh Valley Phantoms won their third straight with a 3-1 decision at the Hartford Wolf Pack on Friday night.

It was the second consecutive time for Lehigh Valley (6-11-5) to defeat the first-place Hartford team including a 4-3 shootout win at PPL Center last Sunday. The Phantoms were playing their first road game since November 26.

A low-event first period changed directions in the final minute of the frame with Hartford pushing hard. Pat Nagle made some of his best saves of the game in the final seconds to keep the game 0-0 into the first intermission. 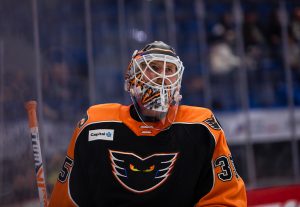 Hartford scored first on a power-play goal by Anthony Greco early in the second period. It was the first time in seven games in which the Phantoms did NOT score the first goal.

But Lehigh Valley quickly equalized with Hayden Hodgson (4th) deflecting a snappy pass by Cal O’Reilly turning a give across by Isaac Ratcliffe off the left boards into a strong scoring opportunity to beat goalie Adam Huska.

The Phantoms took the lead late in the second period on the rush with Gerry Mayhew nudging the puck over to Bunnaman who blased home his second of the year for a 2-1 lead. Bunnaman took something of a beating in the game. He came up hurting on two of his blocked shots and he was also elbowed hard by bruising veteran P.C. Labrie (who earned 14 minutes of penalties on the play).

Hartford and Lehigh Valley were even in shots in the second period at 12-12. Nagle made a couple impressive stops in tight including a glove save on Morgan Barron to preserve the 1-1 tie before Bunnaman put the Phantoms ahead.

Lehigh Valley did not sit back in the third with its one-goal advantage. Instead, the Phantoms charged ahead and largely dominated the final 20 minutes with a 15-4 shots lead. Maksim Sushko battled for a puck at the Phantoms line right after Hartford had pulled its goalie for an extra attacker. From his knees and with his hands way down on the stick, Sushko swatted the puck out of the zone for a clear that happened to go all the way down ice and into the empty-net with exactly 2:00 remaining to eseentially seal the victory. 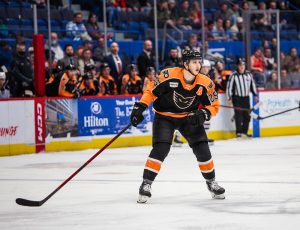