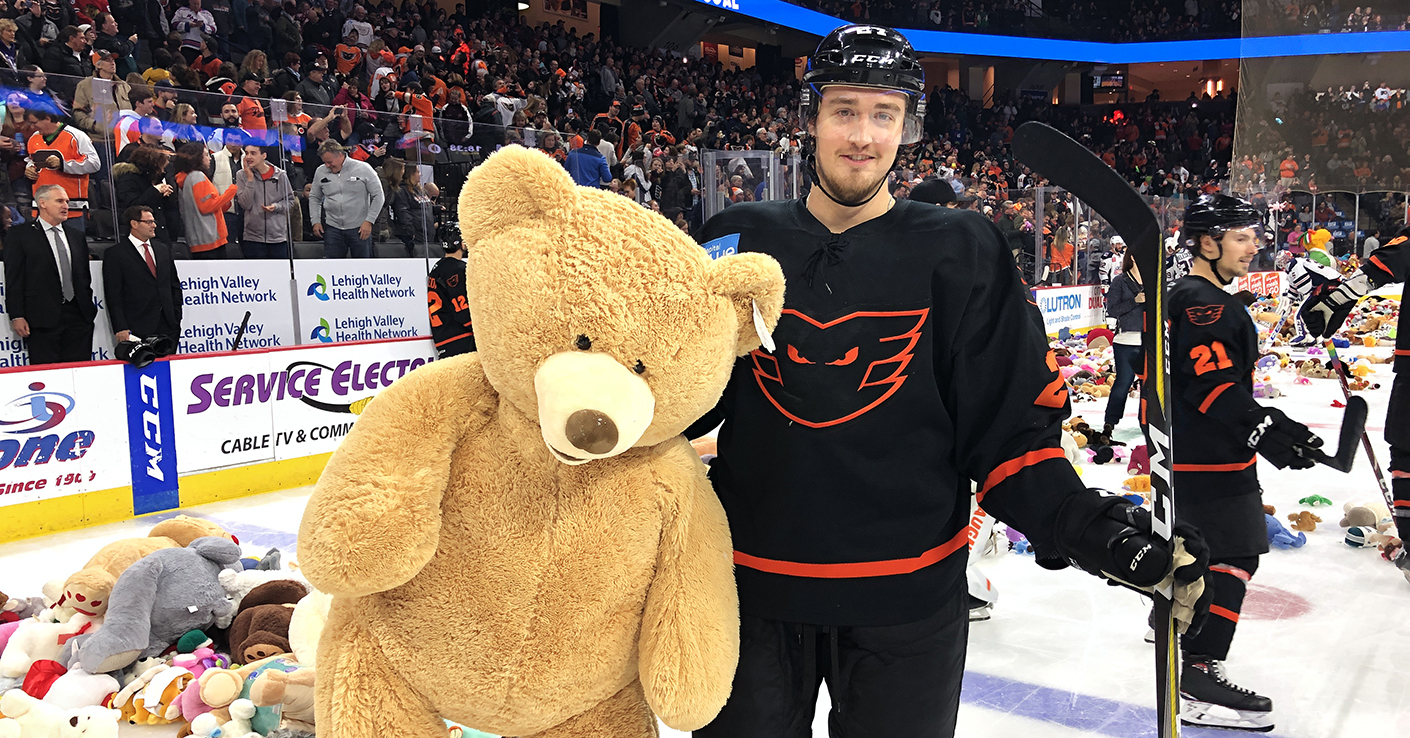 Phantoms Bear Down in 4-2 Win over Hartford

Lehigh Valley, Pa. – The Lehigh Valley Phantoms (11-11-1-4) returned home on Saturday night and defeated the Hartford Wolf Pack (16-5-2-5) 4-2 to earn their first victory of December in front of a sold-out PPL Center. The Phantoms offense finally broke out with four goals from four different players as Chris Bigras, Nicolas Aube-Kubel, Gerry Fitzgerald and Maksim Sushko all lit the lamp in the win.

After meeting Friday night in Hartford, where the Wolf Pack collected a 4-0 win, the Phantoms and Wolf Pack made the 200-mile journey to Allentown for the second part of a home-and-home weekend series. The Phantoms entered Saturday night’s contest looking for their first victory of the month but would have to do it against the AHL Atlantic Division leaders in Hartford while also playing the second game of a three-game weekend. 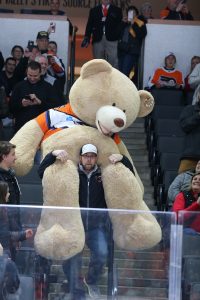 The fans didn’t have to wait long to throw their Teddy Bears as Chris Bigras scored against his former team just 1:22 into the game to bring the stuffed animals raining down from the sold-out PPL Center crowd. The goal was his second of the season, as he sent a shot from the point past a screened Adam Huska to give Lehigh Valley a 1-0 lead and get the fun started early on Saturday. Kurtis Gabriel and Nate Prosser earned assists on the goals. The Teddy Bears were all collected and will be counted and delivered to Valley Youth House on Monday.

The Phantoms made it a 2-0 lead in the final five minutes of the period when on the penalty kill. Forwards German Rubstov and Nic Aube-Kubel were able to race down the ice turning a 3-on-2 into a 2-on-1 before Rubstov fed a perfect pass to Aube-Kubel who went forehand to backhand before depositing the puck into the net for a shorthanded goal. The tally was Aube-Kubel’s fifth of the season. For Rubstov, it was his sixth assist on the season and first point since returning from injury. Defenseman Tyler Wotherspoon also earned an assist on the goal.

The first period also saw strong performances from the Phantoms penalty kill and goalie J-F Berube. The Phantoms killed off three penalties in the opening 20 minutes including a full two minutes of 5-on-3 hockey. Berube, on the other hand, stopped all 10 shots Hartford sent his way in the first period. 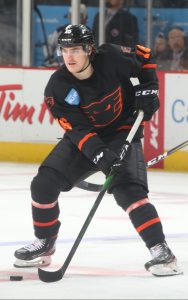 The second period of the game was quiet on the goal front with neither team lighting the lamp. The shots in the period ended up even at eight a piece with both goalies standing tall including several big saves from Berbue to keep the Phantoms lead at 2-0.

In the third period, Hartford quickly made it a 2-1 game in the opening minutes as forward Ryan Groop beat Berube with a backhander. With under 10 minutes to go in the third, the Phantoms extended their lead back to 3-1 when Gerry Fitzgerald rocketed a slap shot from the left circle past Huska. The goal marked Fitzgerald’s second goal of the season with assists on the play coming from Reece Wilcox and T.J Brennan.

The Wolf Pack wouldn’t go quietly in the third as forward Vinni Lettieri cut the Phantoms lead back to one goal when he sniped a one-timer over Berube’s shoulder. The Phantoms, however, sealed the deal on their victory when Maxim Sushko scored an empty-net goal from center ice to extend the lead to 4-2 with under two minutes to play. The goal marked Sushko’s fourth of the season while Wotherspoon earned his second assist of the night. Also earning an assist on the goal was goaltender J-F Berbue.