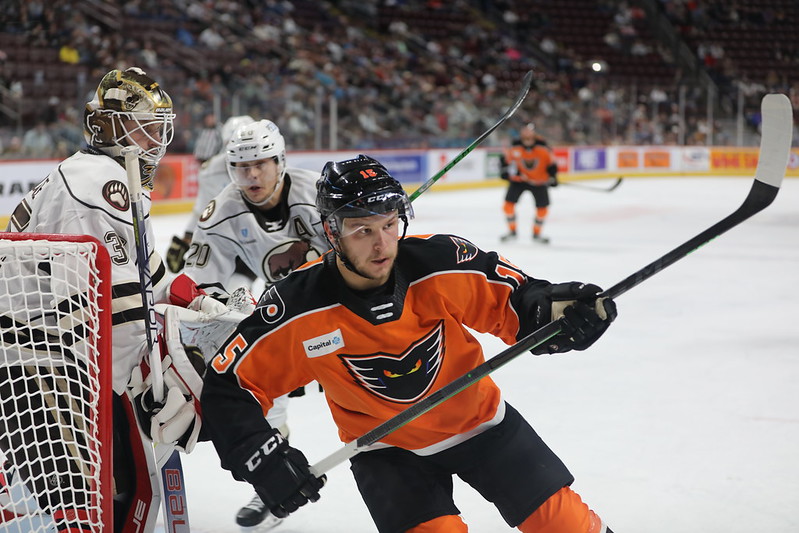 Hershey, PA – Elliot Desnoyers scored again in his second professional game and Sam Ersson was terrific between the pipes with 26 saves but the Hershey Bears held off a late Phantoms push to survive with a 2-1 decision on Sunday afternoon at Giant Center.

The 20-year-old rookie, Desnoyers, raced up ice to meet a connection from Zack MacEwen, and sped his way past two Bears defenders while moving the puck to his forehand for a breakaway goal early in the second period. It was the second game in a row in which Desnoyers has opened the scoring for the Phantoms having lit the lamp back-to-back in his first two professional games.

Ersson was fantastic in his return to Lehigh Valley (1-1-0) with a 26-save performance that included several impressive backdoor and point-blank denials of big chances for the Hershey Bears. But Mike Sgarbosa eventually broke through with a power-play goal for Hershey (2-0-0) on a scramble in the slot to break a late 1-1 tie with 10:37 remaining in the third period. Hendrix Lapierre had earlier struck for the game’s first goal with 3:56 remaining in the first period to give Hershey the 1-0 lead as the Washington Capitals 2020 first-rounder notched his first career lamplighters.

The Phantoms had a late push in their efforts to equalize having received their first power play of the game with just three minutes remaining and then pulling goalie Sam Ersson to set up a 6-on-4 attack with under two minutes left. Hayden Hodgson’s blast from the right circle that went off the pads of Zach Fucale was perhaps the Phantoms’ best chance of the late surge.

The game began with some scrums and shoves befitting of the Phantoms vs. Bears rivalry. There were no official fights in the game but there definitely appeared to be a decent amount of bad blood potentially from some of the previous encounters in earlier seasons. Jordy Bellerive is a former Wilkes-Barre/Scranton Penguin of the past three seasons who also had his fair share of run-ins with guys like Kale Kessy and Dylan McIlrath and seemed perfectly comfortable carrying some of that feistiness to his new team with the Phantoms.

The Phantoms and Bears will meet 13 more times this season including an October 30 rematch at Giant Center. The Bears visit PPL Center for the first time on November 30.

Next up for the Phantoms are the team’s first home games of the year with a two-game series against the Cleveland Monsters on Saturday, October 22 and Sunday, October 23 as part of a season-opening four-game homestand.