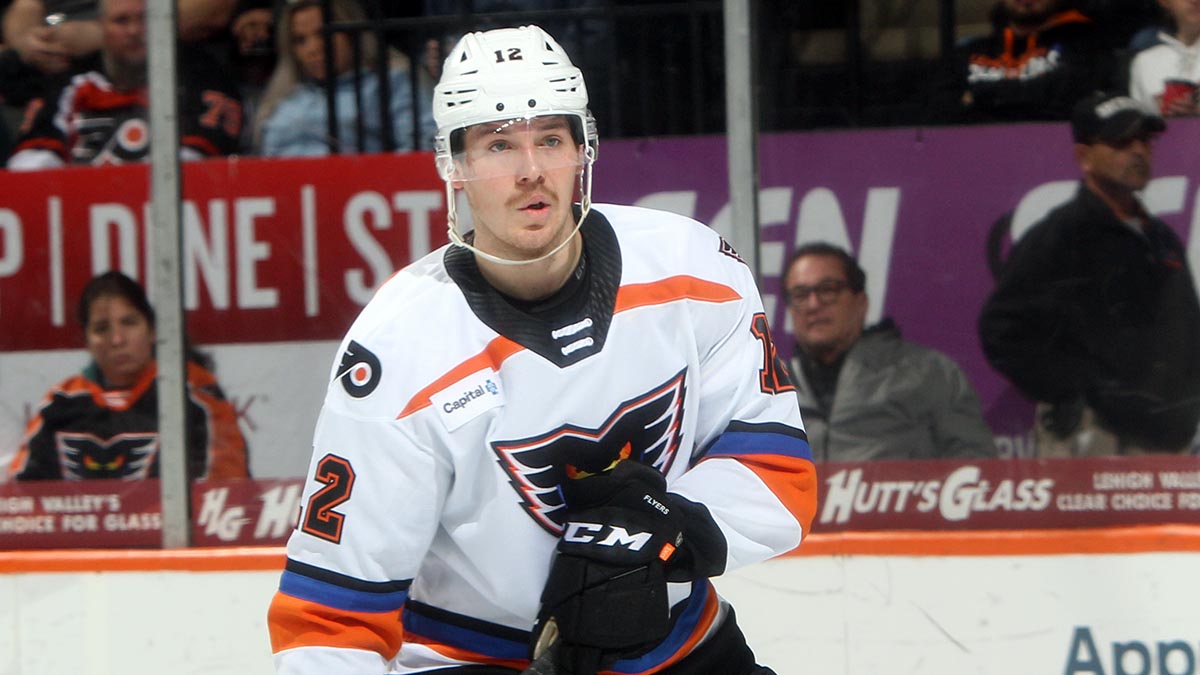 Fortunately for Attard, he prepared all summer for what awaited him come September. He was ready.

“You hear a lot of stories from guys about past training camps [with Tortorella], but you don’t really know what to expect,” Attard said Tuesday following practice with the Lehigh Valley Phantoms.

“It was my first camp, but it was definitely one of the toughest things I’ve gone through in my hockey career. Just a lot of skating, a lot of hard work. You’re always under the microscope, but it was a lot of fun. There’s a great group of guys, too, so it was just kind of cool to go through that together and just battle it out every day.”

Attard even broke camp with the Flyers, sticking around long enough to be on the NHL club’s opening-night roster before eventually heading to Lehigh Valley to begin his rookie season in earnest. The 23-year-old defenseman departed Philadelphia happy with his performance. Happy too were the Flyers, who had selected Attard in the third round of the 2019 NHL Draft. He went on to skate three seasons at Western Michigan before turning pro last April and registering his first 15 NHL contests to close out 2021-22.

“The message was to just go get games in and get some more reps,” Attard said of his assignment to the Phantoms. “They said I had a good camp.”

Attard was named the National Collegiate Hockey Conference’s best offensive defenseman in both 2020-21 and 2021-22, and was an NCAA West First Team All-American. His 36 points (13 goals, 23 assists) in 39 games ranked third among all defensemen in the nation last season, and he found a steady home in the defensive rotation with the Flyers as they played out the stretch in April, including a career-high 21:34 of ice time in his final game of the season.

But Tortorella’s arrival, combined with the Flyers’ sinking to 29th in the NHL last season, made for considerable uncertainty for much of the organization’s playing talent, and certainly its prospects. Little is guaranteed for anyone, and with a 7-8-4 record in Philadelphia, there is still a lot of work to do. Jobs are available for the right candidates, and everyone is on notice as Tortorella continues to evaluate exactly what he has to work with in Philadelphia.

An hour or so away at PPL Center, Attard is controlling what he can control and living up to his reputation as a standout offensive talent who can be trusted away from the puck. Phantoms head coach Ian Laperriere has leaned heavily on Attard in a pairing with veteran defensive defenseman Kevin Connauton, and has entrusted him with time in all situations.

In 14 games with Lehigh Valley, Attard has posted nine points (four goals, five assists), one off the league lead among rookie blueliners, and he has made a quick adjustment to the AHL. In just his fourth game back on Oct. 23, Attard scored two first-period goals to help the Phantoms to a 5-4 win over Cleveland.

“It’s been great so far,” Attard said of his time in Lehigh Valley. “Been getting a lot of minutes on the PK, the power play as well.

“I’d say I’m at my best game when I’m killing plays quickly, moving the pucks up, and then when there’s a chance to join, just making sure I’m there ready for it. Not leading the rush, but just be right there for when the forwards need me and there’s a little gap… Using my shot to get pucks to the net and cause chaos.”

After finishing last in the Atlantic Division in 2021-22 and starting slowly this season, Lehigh Valley has found traction lately. The Phantoms (7-6-1-0) reeled off five straight wins from Nov. 5-19, including back-to-back victories last weekend on the road against the league-leading Providence Bruins. This week, the club visits Wilkes-Barre/Scranton on Friday before hosting Rochester on Saturday.

Attard, a Michigan native, has arrived in the AHL with a strong base with which to work against pro competition. He found the opportunity to stay close to home and compete against the likes of Denver, Minnesota-Duluth, North Dakota and the rest of the deep NCHC field highly appealing.

Those three years on campus also provided him with coaches possessing AHL experience. Head coach Pat Ferschweiler spent four seasons as an assistant coach in the Detroit Red Wings organization, including the 2014-15 campaign with the Grand Rapids Griffins. In Attard’s third and final season he also had an opportunity to work with associate head coach Jason Herter, a long-time pro defenseman who played with the AHL’s Hamilton Canucks as well as five teams in the International Hockey League, including the Milwaukee Admirals.

“Coach Ferschweiler, now that he’s taking over that program, has done a great job there at developing players,” Attard said. “He’s coached at the pro level, so he knows what it takes. He helped me out a tremendous amount and my game, just what I need to do to get to the next level.

“It was awesome to have [Herter] as well for my last year there. He knows what it takes as well, and he was very hard on me, but it was in a good way, and we had a great relationship.”

But while Western Michigan and the NCHC provided Attard with a strong foundation to enter the pro game, the AHL has asked for more out of him.

“Every guy up and down the lineup is stronger, a little bit faster, probably by a step or two,” Attard stated. “Mostly how tough and strong guys are. You can’t go into a puck battle light on your stick or you won’t win.”

To that end, adding strength and foot speed have been ongoing priorities for Attard, who is 6-foot-3 and 207 pounds. Now he has Laperriere — who played 1,083 NHL games — and the Lehigh Valley coaching staff to help him take that final leap to Philadelphia.

“He’s a very passionate coach,” Attard said of Laperriere. “Comes to the rink every day fired up, ready to go. I love playing for him. He’s a guy that you want to block that shot for. You want to get the win. He’s very personable with his players, too. It’s not just all hockey.”

It’s not all hockey but it is a lot of hockey, as Attard and the rest of those young prospects compete for future work in Philadelphia.