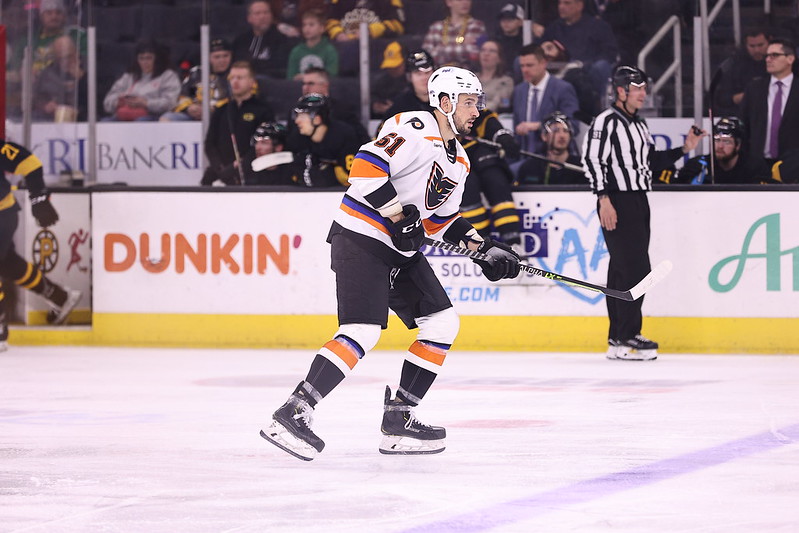 Providence, RI – The Lehigh Valley Phantoms erased a 4-2 deficit in the third period and stunned the Providence Bruins in overtime 5-4 on Friday night at Amica Mutual Pavilion. Artem Anismov scored twice, including the overtime game-winner on the power play. Kieffer Bellows recorded three points and extended his goal streak to three games while Elliot Desnoyers scored his team-leading 10th goal of the second and his second shorthanded marker. Adam Ginning found an ideal time to blast home his first career professional goal in North America with a game-tying strike in the third period. Lehigh Valley will finish the 2022-23 season a perfect 3-0-0 on the road in Rhode Island.

Anisimov scored from the side of the net with Bellows connecting with him from the high-slot. Egor Zamula also assisted on Lehigh Valley’s third overtime winner of the season as the Phantoms improved to 3-0-0 against the Providence Bruins who entered the weekend with the second-best record in the AHL. 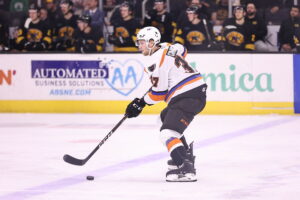 Goals by Anisimov and Ginning in the third period wiped out the Bruins 4-2 advantage after 40 minutes and forced the overtime stanza. It was Lehigh Valley’s first come-from-behind win when trailing after two periods.

Anisimov has scored four goals in two games since officially signing an AHL contract with the Phantoms for the remainder of the 2022-23 season. The accomplished NHL veteran of 13 seasons has lit it up for seven goals in eight games since joining Lehigh Valley.

Lehigh Valley (12-9-2) and Providence (15-4-6) are slated to rematch Saturday night at PPL Center in the annual Teddy Bear Toss Presented by Big Woody’s. Thousands of teddy bears thrown onto the ice after Lehigh Valley’s first goal of the game will go to benefit our friends at Valley Youth House and other area organizations. Bring your new or gently used stuffies and plushies to the game to join the fun.

Bellows continued his offensive touch since joining Lehigh Valley by providing his club a 1-0 lead at the 4:45 mark. On the rebound of a Garrett Wilson shot, Bellows potted his third goal of the season from a sharp angle along the right wing.

Before the opening frame expired, the P-Bruins answered courtesy of Joona Koppanen from Mike Reilly and Chris Wagner at 14:07. Shots after 20 minutes were even at 13-13.

Only 2:14 into the second period, Elliot Desnoyers capitalized in the ensuing moments following a Providence neutral zone miscue. After a turnover near the Phantoms’ blueline, Desnoyers went coast-to-coast and buried a 2-on-1 odd-man chance against Bruins’ backstop Keith Kinkaid. The unassisted goal marked Desnoyers’ second shorthanded dandy of the season, and his team-best 10th goal.

Despite Lehigh Valley dictating the pace of play in the period’s opening 10 minutes, Providence took full advantage of two full minutes of 5-on-3 power-play time. Linus Hogberg and Garrett Wilson were both whistled for minor infractions at 11:24, which led to Fabian Lysell scoring on the two-man advantage at 11:41 to knot the contest at 2-2.

Marc McLaughlin hit pay-dirt on the ensuing 5-on-4 chance at 13:06 after burying a centering feed from Georgii Merkulov on the rush. Providence’s one-goal advantage late in the second stanza grew larger on Samuel Asselin’s fourth goal of the season on a behind-the-back drop by Fabian Lysell from teh slot back to the right circle at 17:12. Shots after 40 minutes were 22-19 in favor of the Phantoms despite Lehigh Valley trailing 4-2.

Artem Anisimov finished a slick, tic-tac-toe passing play at 2:14 to cut the P-Bruins’ lead to 4-3 just barely more than two minutes in the third period. Bellows and Tyson Foerster earned the helpers. Later in the period, Adam Ginning blasted home a center-point shot after a clean, offensive zone face-off win for the equalizer. Desnoyers controlled the face-off, Cooper Marody dropped a pass onto a tee for Ginning, who seized the opportunity to tally his first career professional goal in North America at 11:57.

In sudden-death overtime, Lehigh Valley took full advantage of a power-play chance. Bruins’ Luke Toporowski was infractioned for closing his hand on the puck at 2:45, and the Orange and Black provided the dagger. Artem Anisimov redirected a shot from Kieffer Bellows at 4:33 past a scrambling Keith Kinkaid to complete a wild, road comeback win.

The Phantoms return to PPL Center to tangle with the P-Bruins on Saturday for the team’s Teddy Bear Toss. The Phantoms continue the weekend with a road excursion to rival Hershey on Wednesday. 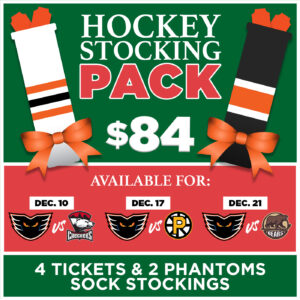