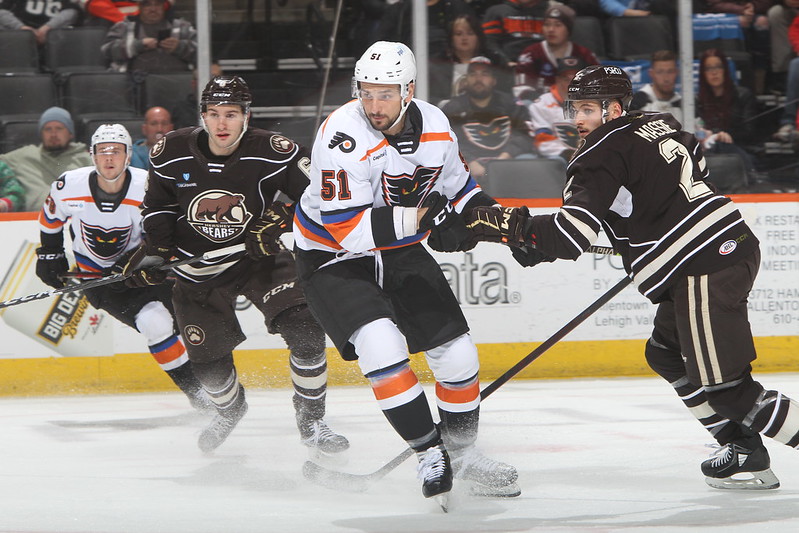 Desnoyers With Team-Leading 11th as Hershey Rallies at PPL Center

Lehigh Valley, PA- The Lehigh Valley Phantoms scored two goals in 24 seconds late in the first period to take a 2-1 lead into the first intermission, but the Hershey Bears scored the next three on their way to a 4-2-win Wednesday night at PPL Center. Artem Anisimov and Elliot Desnoyers both continued their outstanding seasons, but it ultimately wasn’t enough to get the team over the hump. Ethen Frank (9th, 10th) scored a pair of goals to pace the Bears while Hunter Shepard stymied the Phantoms with 27 saves.

Frank scored six minutes into the game on a backhand shot after collecting the rebound of a Nagle save off a Jake Massie drive. These were the first two shots of the game by the Bears after Lehigh Valley (12-11-3) recorded the first four. Hershey (20-6-3) took the 1-0 lead into the closing minutes of the first period before the Phantoms took total control in a dominating stretch against the top team in the league.

Lehigh Valley flipped the momentum late in the opening period as Anisimov got his ninth of the season and second in the last two games against the Bears. The veteran drove to the front of the net ti fire in Olle Lycksell’s centering pass. That capped a sequence in which Bears defenseman Aaron Ness lost his stick, and the Phantoms had several keep-ins in a row on an especially strong shift while preventing the Bears from changing.

Anisimov has now scored a goal in four of the last five games with six total goals in the impressive stretch since officially signing with the Phantoms for the remainder of the 2022-23 season after initially joining the team on a PTO. 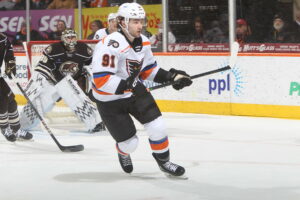 Just 24 seconds later, Elliot Desnoyers scored his team-leading 11th goal of the season, depositing a rebound chance behind Hunter Shepard after a shot from Adam Ginning. Lehigh Valley registered its fastest consecutive goals of the season as the 20-year-old rookie, Desnoyers, moved into a tie for second in the AHL with the Iowa Wild’s Sammy Walker for second-most goals by a rookie. Shots finished 15-6 for Lehigh Valley in a dominating opening period. But Shepard kept a clean sheet after that. Pat Nagle had the start for Lehigh Valley and made 19 saves on 22 shots.

Connor McMichael scored the only goal in the second period at 11:05 to tie the game at two apiece. This was his second consecutive game against the Phantoms with a target-breaker to the top corner, this one on a 2-on-1 rush that beat Nagle to the glove side, assisted by Matt Strome and Dylan McIlrath. McMichael has three goals in three games vs Lehigh Valley this season, accounting for half of his six goals on the year.

Hershey broke the deadlock midway through the third on Ethen Frank’s second goal of the night, a power play one-timer from the left circle assisted by Ness and Sgarbossa. Lehigh Valley started to generate chances at Shepard late in the third but couldn’t find the equalizer.

Hershey tacked on an empty netter by Mason Morelli with 10 seconds remaining to play to produce the 4-2 final score.

Lehigh Valley has one more game before the Holiday Break when they travel to Springfield for a Friday night encounter against the Thunderbirds. The Phantoms return to PPL Center on Wednesday, December 28 against the Bridgeport Islanders. It’s another pregame happy hour featuring $2 Yuengling and Miller Lite drafts.