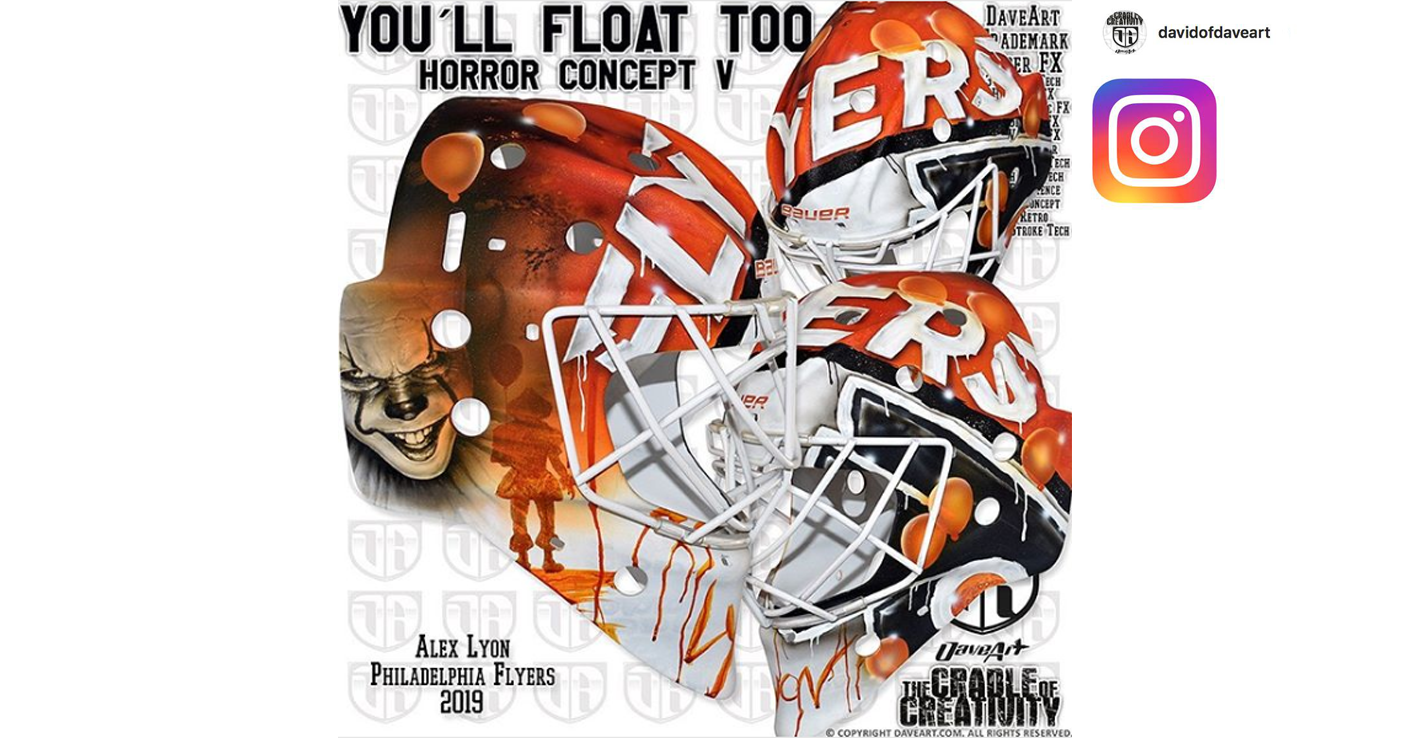 On the ice, we’ll all float.

Philadelphia Flyers prospect and current Lehigh Valley Phantoms goaltender Alex Lyon will once again begin the season with a horror-movie-inspired mask that draws inspiration from Stephen King’s chilling character Pennywise from the novel and movie It.  The mask, which features the infamous clown and his iconic balloons, was painted and designed by David Gunnarsson of “Dave Art”, who introduced the mask on Instagram on Thursday afternoon.

The unveiling of Lyon’s new mask came just in time for the release of It Chapter Two, which will hit theaters on Friday, September 6.  The movie, which stars Jessica Chastain, James McAvoy and Bill Hader, is a sequel to the 2017 release It.

This is one in a long line of horror-themed masks that Lyon has had created by Gunnarsson. His very first also featured Pennywise and the second included Jigsaw from the popular Saw movies.  This past season, the 26-year-old Yale product began the season wearing a mask that featured scenes from the popular M. Night Shyamalan psychological thriller Sixth Sense.

The left side of the new mask is adorned with the chilling smile of Pennywise himself while the top and right side of the mask feature the Philadelphia Flyers name and logo.  In addition to that, Lyon’s name will be across the chin and a number of the clown’s balloons are floating throughout the design painted predominantly in orange, black and white.

The Philadelphia Flyers will return to PPL Center for the fifth time as they bring their annual Rookie game to the Lehigh Valley on September 11, 2019, when the Flyers rookies square off against the New York Islanders rookies.  Tickets are on sale now and are just $10!  Secure your seats by purchasing tickets HERE.

Season tickets to the Phantoms, offering a wide range of benefits, as well as 21-Game and 13-Game plans are available by calling the Phantoms at 610-224-GOAL (4625).