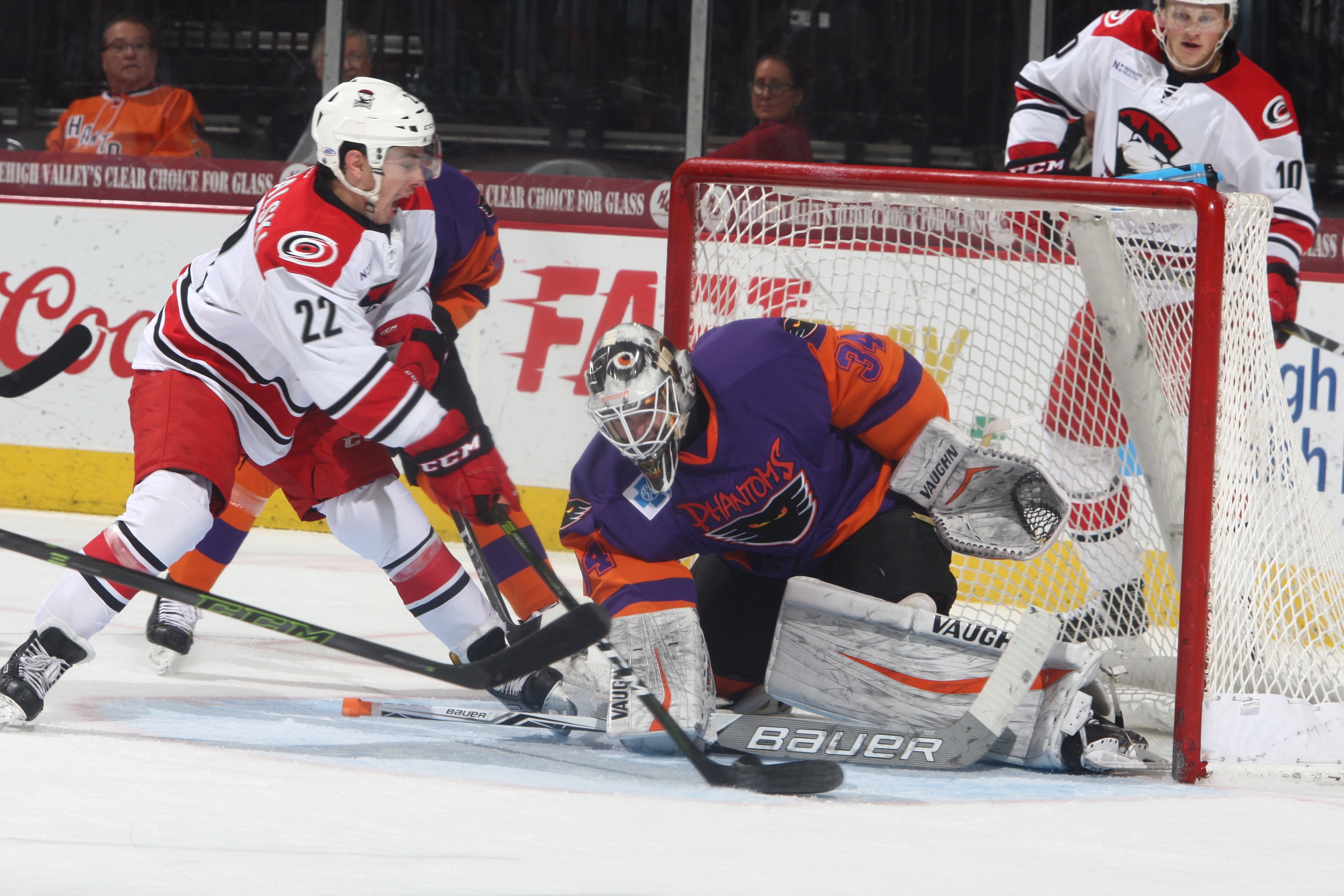 Lehigh Valley, PA – Alex Lyon racked up 38 saves in a tremendous performance while WIll O’Neill (4th) and Oskar Lindblom (11th) scored the last goals of 2017 but ultimately the Charlotte Checkers held on for a 5-2 decision at PPL Center on Saturday night.

The two most prolific offenses in the American Hockey League found themselves in a classic goaltenders duel on Retro Night at PPL Center with both Alex Lyon and Alex Nedeljkovic making one dazzling denial after another. But Lyon was the real showstopper on the night and kept the Phantoms ahead for much of the game before the Checkers finally successfully broke through late in the second period.

An enthusiastic crowd of 8,050 filed into PPL Center for a fun-filled Retro Night featuring 80’s songs and references throughout the contest while the Phantoms again sported their purple and orange retro-style jerseys. The unique items were offered to the fans via a postgame jersey auction immediately after the contest with the Phantoms players themselves presenting the colorful sweaters directly to the winning bidders.

The Phantoms had won the opener on Friday night 3-1 backed by more terrific stops from Lyon and thus the two teams ended up splitting their hard-fought weekend set leaving Lehigh Valley ahead of Charlotte in the Atlantic Division standings. 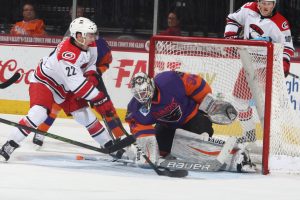 Lehigh Valley’s six-game point streak came to a close as did the team’s three-game win streak. It took all the way to the last game for the Phantoms to sustain a regulation loss at home in the month of December. The Phantoms boasted an impressive 5-1-2 mark at PPL Center in the culminating month of 2017. Lehigh Valley also took just their fourth regulation loss in their last 17 games moving to 11-4-2 since Black Friday.

Lyon certainly had a lot to be proud of in this performance with several point-blank denials on danger-zone Charlotte Checkers chances. The 25-year-old netminder out of Yale University certainly did not seem to have any rust after having not appeared in game action since December 1st before his return from the Flyers earlier in the week.

“I’ve got a lot of energy stored up in the tank so I liked it.” Lyon said. “I try and do my thing and work hard. It feels good to play after not playing for so long, so I’m looking to build on that. I felt good tonight.”

Lindblom concluded the 2017 portion of the schedule with goals in consecutive games and wrapped up December with seven of his 11 tallies of his tallies coming in just this month. Phil Varone assisted on the late third-period tally by Lindblom for his 28th helper and 38th point of the seasson which rated second in the AHL.

Lyon had to stand on his head right from the start as the Checkers showed significant early jump in response to their frustration at the hands of the Phantoms from the night before. His 11 saves in the opening seven minutes kept the game deadlocked at 0-0. Patrick Brown’s quick breakaway sneaking behind the defense was the top effort of the early portions of the contest for the Checkers. 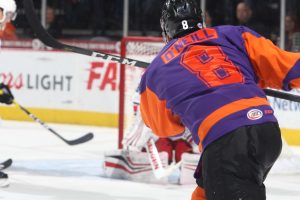 The Phantoms surged back and opened the scoring midway through the first period on a power-play slapper from the right dot by Will O’Neill. Rookie talents Philippe Myers and Mike Vecchione assisted on the strike. Both young prospects had recently returned to the lineup after they had been sidelined with injuries.

Lyon preserved the 1-0 lead through the first period while Charlotte held a 16-7 shots advantage at the break. He continued to showcase his talents throughout the second period including a couple more breakaway stops on intruding Checkers forwards.

Finally, Charlotte broke through late in the second period with consecutive goals to turn the tables on the Phantoms. Nicolas Roy (6th) evened the score at 15:37 into the second period with a backhander on the breakaway. And shortly after a Max Lamarche five-minute boarding major, Aleksi Saarela (13th) cranked up a 5-on-3 slapshot from the left circle to the upper far corner for a 2-1 lead.

Lehigh Valley’s penalty kill kicked it into high gear at that point to stay within a goal. The Phantoms successfully thwarted the remaining 4:51 of Charlotte’s man-advantage that carried over from the end of the second into the beginning of the third.

The Phantoms were in search of their league-leading fifth comeback in the third period this year but were unable to cash-in on a pair of key power-play chances in the final frame. Ultimately, Warren Foegele (17th) walked in front from behind the net and scored an uncontested goal on Lyon for a 3-1 lead with just 2:30 to go.

Oskar Lindblom struck back with 1:58 to go to cut the margin to 3-2 with his nifty bank fromteh side of the net off the glove of the Charlotte goalie and perhaps off the leg of a Checkers defender as well. Varone and Tyrell Goulbourne received assists on the late strike. 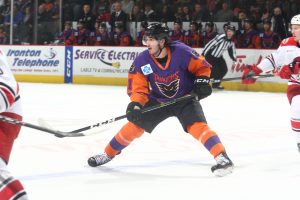 Lindblom’s 6-on-5 goal pulled the Phantoms back to within contention but a pair of empty-netter in the closing moments by Andrew Poturalski (10th) and Patrick Brown (6th) sealed the triumph for the visitors.

Charlotte and Lehigh Valley are even in their season series at 2-2. Charlotte out shot the Phantoms 43-28. Lehigh Valley finished 1-for-6 on the power play while Charlotte was 1-for-5.

The Lehigh Valley Phantoms commence play in 2018 on the road at the Toronto Marlies and Rochester Americans on January 5th and 6th.

The Phantoms then return to PPL Center on Friday, January 12th taking on the Springfield Thunderbirds on Phantoms Ballcap Night presented by Service Electric. Secure your tickets for the highly anticipated game online HERE.