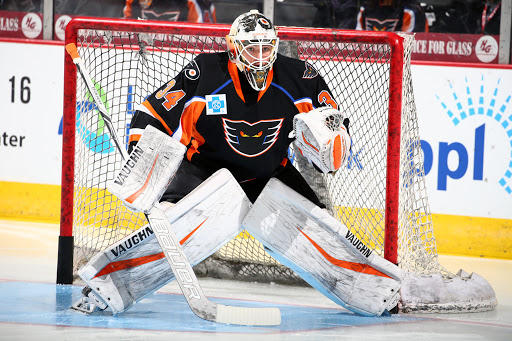 Lehigh Valley’s all-time winningest goalie has been serving on the Flyers’ taxi squad for most of the 2021 season and has not played in almost exactly a year. Lyon’s last game was March 11, 2020 with 33 saves on 35 shots in a 2-1 overtime loss against the Wilkes-Barre/Scranton Penguins in what turned out to be the final game of the 2019-20 season.

During his career over the past four seasons, Lyon has played in 145 games with the Phantoms with an all-time record of 73-53-15 including a 2.73 goals-against average and .913 save percentage. The Yale University product has also played in 16 NHL games with the Philadelphia Flyers going 5-4-1, 3.15, .893.

The Phantoms return to action on Wednesday night at the Binghamton Devils in Newark, NJ and then will host the Devils in a Saturday night rematch at PPL Center.