Lehigh Valley, PA – The Lehigh Valley Phantoms prepare for a three-game road swing to Wilkes-Barre/Scranton and Cleveland. The Phantoms are in the thick of the Atlantic Division playoff race with 31 games remaining in the regular season. 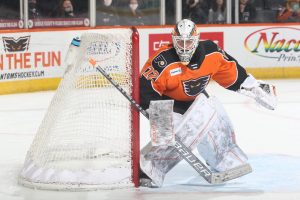 Saturday, February 19, 2022
Utica Comets 3 – Phantoms 2 (SO)
Kirill Ustimenko was terrific in a relief effort for the injured Felix Sandstrom turning aside 20 of 21 shots as the Phantoms earned a standings point against the conference-leading Utica Comets. Hayden Hodgson tied the game at 2-2 with less than 14:00 remaining in the third but the Comets eventually prevailed in the fourth round of the shootout.

Sunday, February 20, 2022
Springfield Thunderbirds 3 – Phantoms 1
Tanner Laczynski scored in just his second game of the season but the Phantoms were otherwise unable to breakthrough against Charlie Lindgren in a home setback to the first-place Springfield Thunderbirds. NHL veteran and three-time All Star James Neal broke a 1-1 tie in the third period and the T-Birds tacked on an empty-netter at the end. 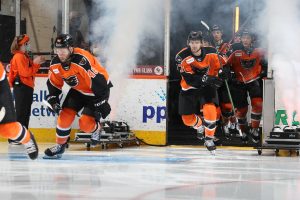 Friday, February 25, 2022 (7:00) – Phantoms at Cleveland Monsters
Saturday, February 26, 2022 (1:00) – Phantoms at Cleveland Monsters
The Phantoms heads to the Buckeye State for a pair of games against the Columbus Blue Jackets affiliate. The Monsters are 2-1-0 since ending a nine-game losing skid on February 12. Cleveland (15-21-8) is stilll in last place in the North Division and is surrendering 3.5 goals per game which is second-worst in the conference only to Rochester. Leading scorer Brendan Gaunce (16-12-28) has gone up to Columbus. 21-year-old seventh-rounder Tyler Angle from the Windsor Spitfires has scored 7-18-25 including a winner at Utica to end their winless streak. Phantoms alum J-F Berube was pressed into duty in Columbus and picked up his first NHL win since 2018 in a 7-3 victory vs. Buffalo.
The Phantoms defeated Cleveland 4-2 at PPL Center on December 11 in the only matchup of the season so far. Adam Clendening broke a 2-2 tie in the third period against his former team.

Roster Additions:
Center Tanner Laczynski was actived from injured reserve by the Flyers and subsequently loaned to the Phantoms. He made his season debut on Saturday and scored a goal on Sunday. Laczynski had been recovering from hip surgery from last September.
Center Adam Johnson was acquired in a trade with the Ontario (Cal.) Reign in exchange for future considerations. The Minn-Duluth product played 185 games with the Wilkes-Barre/Scranton Penguins from 2017-20 and made his Phantoms’ debut on Sunday.
Goalie Alex Sakellaropoulos has signed a PTO (professional try out) contract and joins the Phantoms from the Adirondack Thunder of the ECHL.

News and Notes:
– Lehigh Valley went 2-3-1 on its recent six-game homestand
– Lehigh Valley has gone 14-8-4 in its last 26 games after a beginning that saw just three wins in the first 19 games at 3-11-5.
– KILLING IT! The Phantoms’ penalty kill rates fifth in the AHL and second in the conference at 84.0%. The Phantoms have killed off 10 straight opposing power plays and are at an even stronger 88.4 % (61/69) in their last 23 games since December 18
– The Phantoms have played 45 games and have 31 remaining with barely more than two months to go in the 2021-2 regular season.
– Last week, Maksim Sushko became the 12th Phantoms player this season to play for the Flyers
– Alex Sakellaropoulos is the seventh goalie to appear on the Phantoms’ roster this year joining Felix Sandstrom, Sam Ersson, Kirill Ustimenko, Pat Nagle, Jon Gillies and Garrett Metcalf 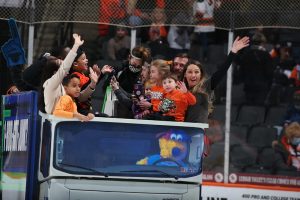